Vayu is the God of the wind. He has been depicted in art with splendour and grace. He is the father of Bhima, who played a major role in the epic Mahabharata. He is also known as Vata, Pavana and Prana. Because of the connection of air with the process of breathing he is also called the Deity of Life or Mukhya Vayu or Mukhya Prana.

Pavan is a common Hindu name. Pavana played an important role in Anjana‘s begetting Hanuman as her child so Hanuman is also called Pavanaputra or Vayuputra or son of Vayu. He is also believed to have born in Kaliyuga as Madhavacharya  near Udipi in Karnataka in 1238 A.D. He propounded the philosophy of Dwaita vedanta. The Upanishads laud Vayu through different statements and illustrations of his greatness.

In the Buddhism of the Far East, Vayu is one of the twelve Devas, as guardian deities, who are found in or around Buddhist shrines.

Shown below is a painting of the astadikpala Vayu. He is depicted with a crown and is four-armed and riding on his antelope vahana. In his upper two hands he carries a pennant and club . His lower two hands are held in abhayamudra  and varadamudra . He is accompanied by two attendants , one  with a club  and another with a parasol held high above him . 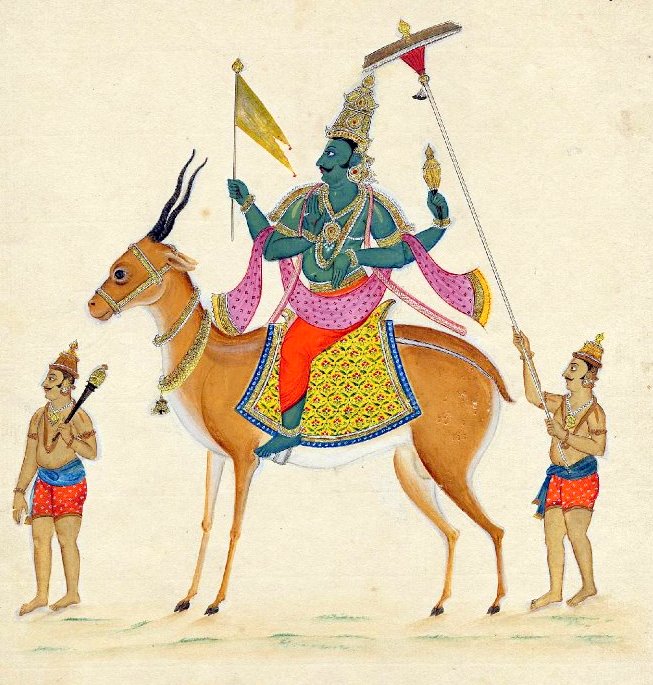 Depicted below is Vayu, god of the wind and guardian of the north-west, riding on an antelope, his vahana. He is clad in royal garments, has a green complexion, and is two-armed. Over his right shoulder he carries a disc-pointed staff , and with his left hand he holds the reins. 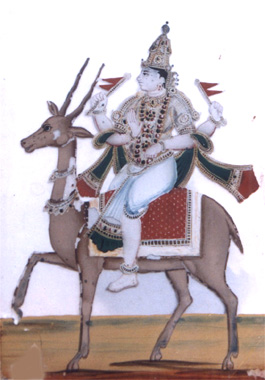