The thought of silver or argentum as it is called in Latin, reminds us of stars, the lining in a cloud, lightning in the sky and snow on mountains and tree tops. Beautiful jewellery, decorative objects and utility items are made from this amazing metal which is soft. lustrous, both malleable and ductile making it highly suitable for use in craft. Silver has technological applications in photography and in the medical world too. Silver is an investment too and figures in the bullion market. Filigree work using silver has been there in Europe, Persia and Central Asia. Ancient Greeks and Romans too were fascinated with this metal and created works of art. Silver is a metal with positivity and hope, augmenting a good future…..every cloud has a silver lining !

An exquisite silver craft which is over 200 years old from the area of Karimnagar in Telangana State in South India is the silver art of filigree. It is believed to have its origins in Elagandala village , around 10-11 kilometres from Karimnagar city. Elgandala, which is situated on the banks of river Manair, was popularly known in earlier times as Bahudhanyapuram, Tellakandula and Veligandula and later came to be called Elgandal. The history of the place is traced to the Old Stone Age and much later ruled by the Mauryas and Satavahanas. Kotilingala in Karimnagar district was the first capital of the Satavahanas. Later to that, the region was ruled by five dynasties; the Kakatiyas, Bahmanis, Qutub Shahis, Mughals and Asaf Jahis. During the  VIth Nizam, Nawab Mir Mahboob Ali Khan’s reign (1869-1911), the district headquarters was shifted from Elgandal fort to the present Karimnagar town in 1905. During the Nizam rule, the name Karimnagar was named for a village by an Elgandal Qiladar, Syed Karimuddin. Inscriptions of the Kakatiyas have been found in the region.

The craft was introduced and  practised by a well-travelled goldsmith Kadarla Ramayya and his family at Elgandala and it was a well guarded technique, in the 19th century. It is called Venditeega pani in the local language, Telugu. It was patronised by royalty and wealthy businessmen; Muslims used to give silver articles as part of dowry, so its demand was always there. After Indian Independence in 1947 the craft faced a setback but by 1956, the co-operative movement helped revive the amazing craft of filigree. The two co-operatives were Tarakashan and Zagaram Osmania which merged as one in 1953 as Tarakashan Society.   The type of articles made using this technique include trays, pandans or betel boxes, attardans or scent holders, purses,jewel boxes, glass holders, jewellery like earrings, necklaces, bangles, rings and pendants, figures of popular deities, handbags, photo-frames, spice containers, lamp stands, baskets, rose-water sprinklers among many others.  The designs are intricate and cause awe and a sense of wonder. The trellis-like work or jaali  as it is called, is made of thin silver wire. The designs include fauna, geometric and floral designs with creepers in delicate exquisite workmanship. The equipment is that as used by a goldsmith or silversmith’s tools. In modern times, a wire drawing machine is also used. Pure silver blocks are made into thin wires and wrapped around a charkha and flattened, later fashioned into the required design. The Government of India had accorded the Geographical Indicator or GI status to this craft of silverwork which augurs well for the future of the artisans and the art. The silver items make excellent gifts for all festive occasions. The craft is sold online, at retail outlets and emporia. Exhibitions are held at urban centres to encourage and promote this art. 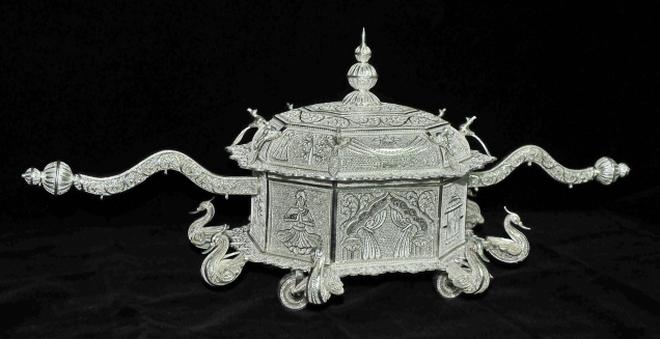 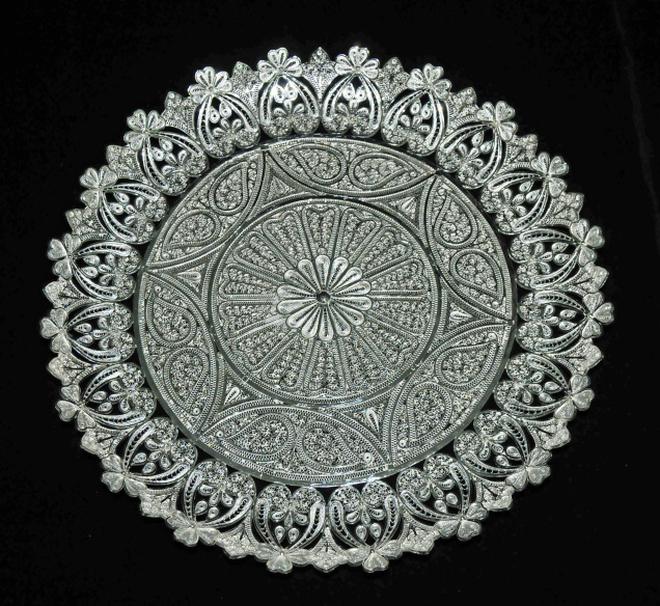 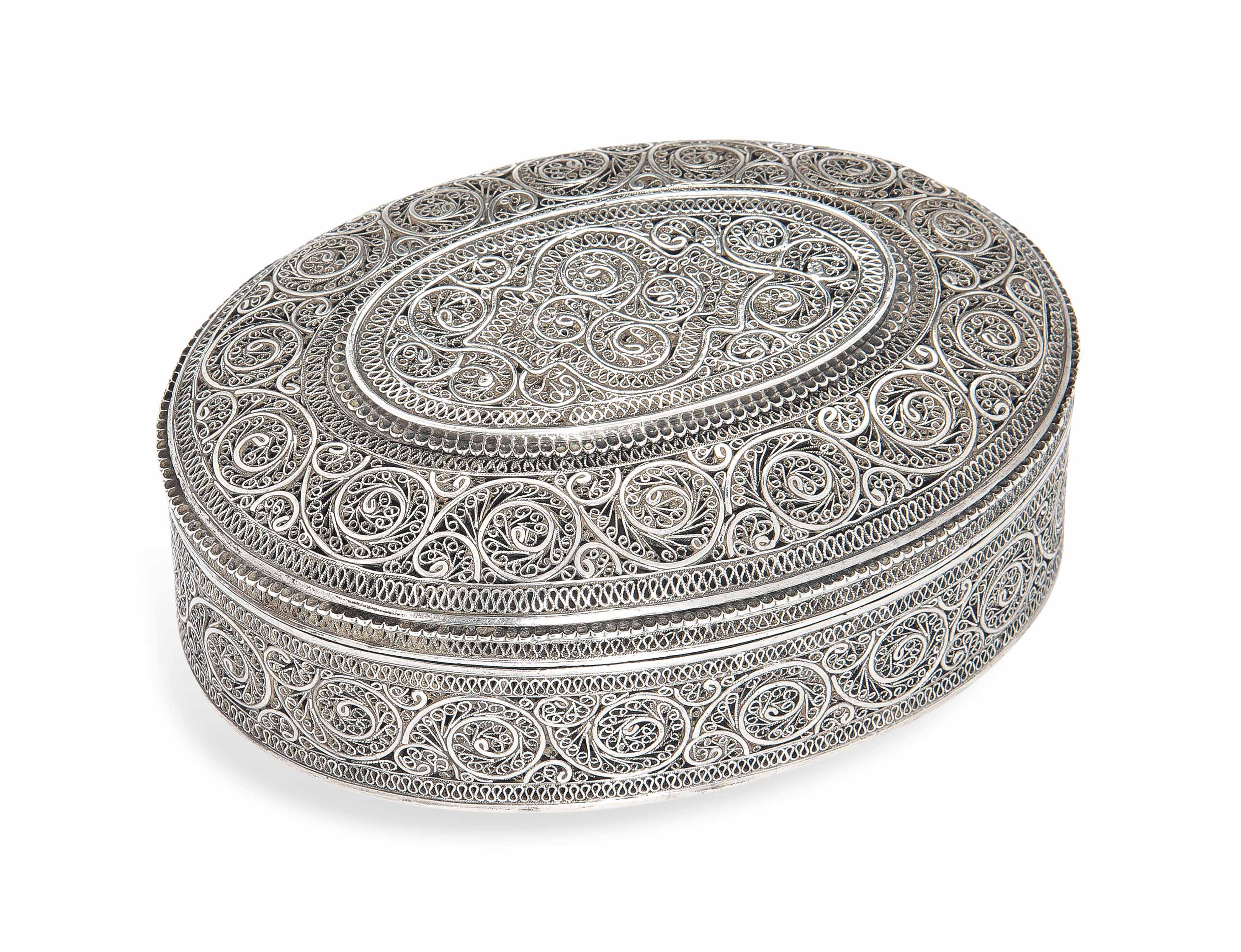