The word Lepakshi means painted eye.  The temple at Lepakshi, a village, 15 km from Hindupur in Anantapur district of Andhra Pradesh in south India is an excellent example of Vijayanagara art. Initially there was considerable influence of Hoysala and Kakatiya idioms , the style developed its own uniqueness by mid-15th century. The main centres to study, reflect upon and admire their art and architecture are at Hampi, Lepakshi,Tadipatri, Melkote, Kolar, Bellary, Chikballapur and Chamarajnagar.

The area of Lepakshi is part of the Mysore plateau and is flat, made  up of granite rocks. The rocka are seen in clusters and the area is surrounded by hills. This area was under the Mauryas in 3rd century B.C., later on the Satavahanas, then the Chutu kings….on.to Chalukyas of Badami, Rashtrakutas, Chalukyas of Kalyani and by the end of the 13th century when the Delhi Sultanate tried to control the whole of Deccan, they appointed two brothers Harihara and Bukka, sons of Sangama to control the political situation at Kampile. However they declared their independence and founded Vijayanagara a new city on the southern bank of Tungabhadra opposite Anegondi. They brought many adjoining areas under their territory. They made afort at Penukonda and made it their second capital. Lepakshi bacame part of their empire.

The art and architecture of a powerful empire in south  Indian history is well lauded since  the style resonates with beauty and freshness. There are some gigantic sculptures inside the temple complexes which include mandapas with pillars which are aging richly carved. Themes from the epics and Puranic stories are depicted too. Musicians, dancers flora, fauna, contemporary society have been carved or painted. Sculpting was a hereditary art and well patronised by the rulers. They formed the panchala  or five types of categories of craftsmen.

The Lepakshi temple is synonymous with the Veeabhadra temple complex. the temple is situated on Kurma-saila (resembling a tortoise back). The temples are the Papanaseswara and Raghunatha shrines. It is unclear about when this complex was started. The brothers Virupanna and Virana took keen interest under ruler Achyutaraya to develop the edifice into an outstanding example of Vijayanagara art. 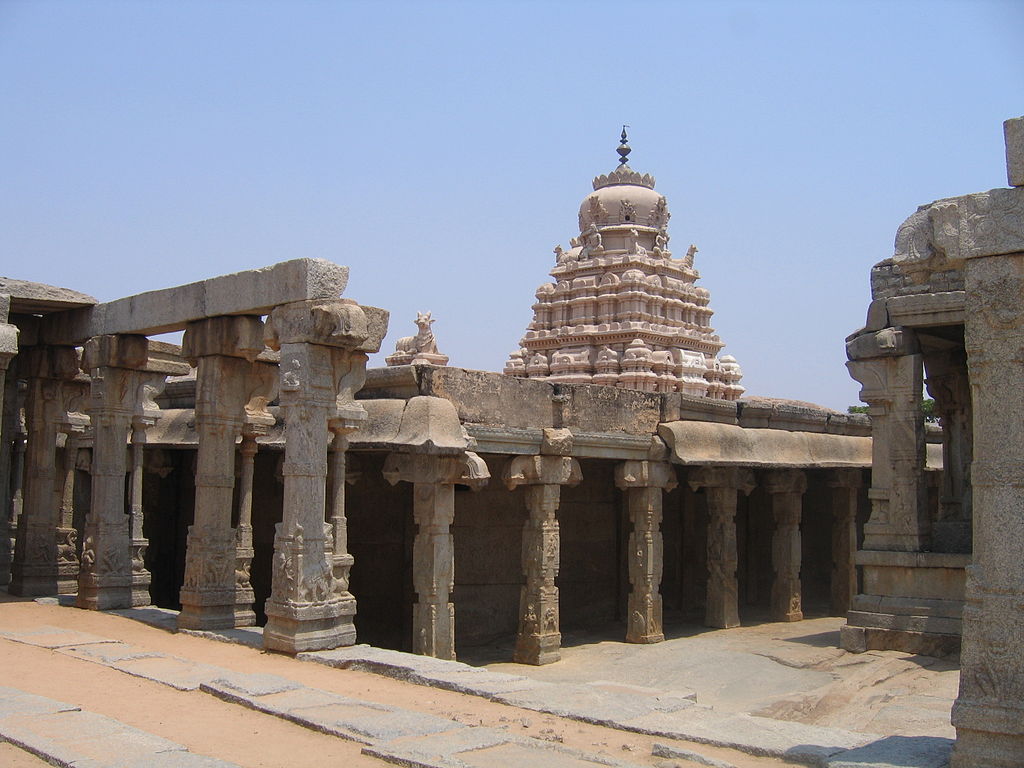 The temple complex was developed over a period of time (1100 A.D to 1800 A.D), made of granite. The structures are at three levels of the hillock, each one having an enclosure or prakara.  The Papanaseswara shrine is the earliest one in the complex. Initially there were two shrines Veerabhadra and Papanaseswara, sharing a common platform with a mandapa around it. The Raghunatha shrine was added later was added to the western side of the prakara. The Veerabhadra shrine has its entrance to the north; the inner prakara in 432 square metres mainly developed between 1350 to 1600 A.D. several shrines, mandapas were added. 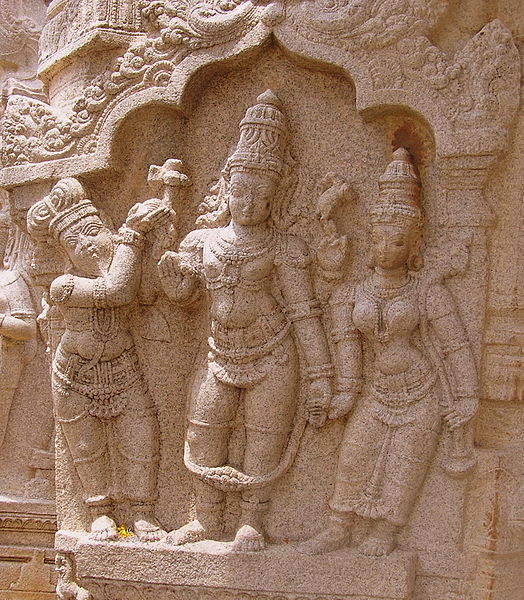 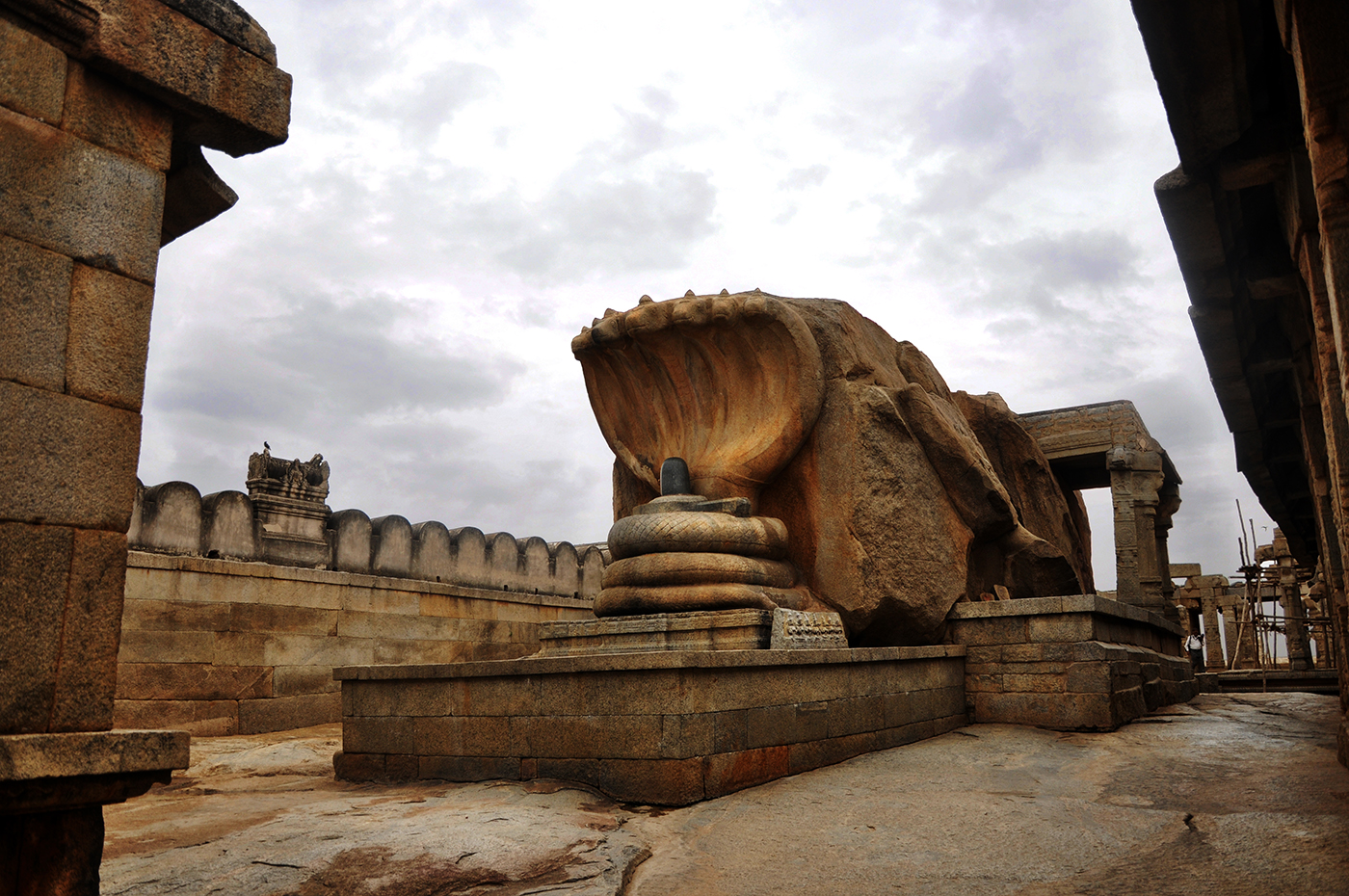 Lord Vishnu has been depicted as Narasimha,Kondandarama,Vamana, Kurma and Sri Krishna as Kaliyamardana and Balakrishna. Lord Hanuman has been carved at many places. garuda is found at different points,Goddess Lakhsmi,Gajalakhsmi is also seen.    Lord Brahma,Dattatreya,Surya,Chandra,Indra,agni,Yama,Varuna,Vayu,Kubera,Ishana, dikpalasGoddess Saraswati, the saptamatrikas have all been depicted. Among the demi-gods, the ganas,rishis,pitris,dwarapalas,apsaras,gandharvas,kinnaras,nagas have been carved. In addition devotees, ascetics,warriors, musicians and acharyas (teachers) too find a place in the temple carvings. Also common people like shepherds, priests, wrestlers, potters et al. Some stories from the Puranas have been carved as well. The decorative motifs include geometric designs, kalasa,chakra,conch,sivalinga and nandi.  The bull at some distance is an amazing monolithic sculpture, Basavanna.

By రహ్మానుద్దీన్ (Own work) [CC BY-SA 4.0 (https://creativecommons.org/licenses/by-sa/4.0)%5D, via Wikimedia Commons

Architectural motifs like mandapas,shikharas, chaitya window are all depicted. Floral motifs like trees, creepers are seen. Flowers are also seen as decoration. Fauna or animals are shown as vahanas or in natural poses. Vyalas are also seen which are imaginery creatures, bit grotesque or fierce looking like simha-vyala,gaja-vyala and nara-vyala. The temple complex has simha-vyala and a few hamsa vyalas. 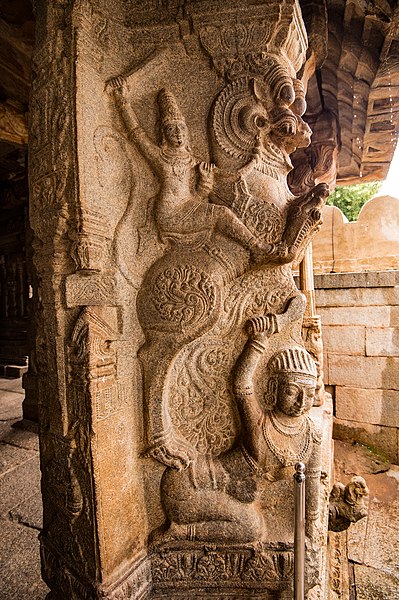 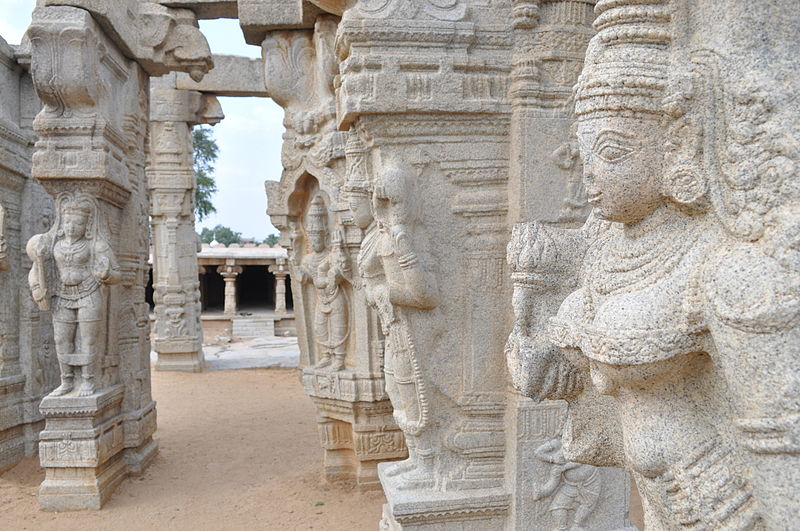 By Perched (Own work) [CC BY-SA 3.0 (https://creativecommons.org/licenses/by-sa/3.0)%5D, via Wikimedia Commons

By Jitzpop (Own work) [CC BY-SA 3.0 (https://creativecommons.org/licenses/by-sa/3.0)%5D, via Wikimedia Commons 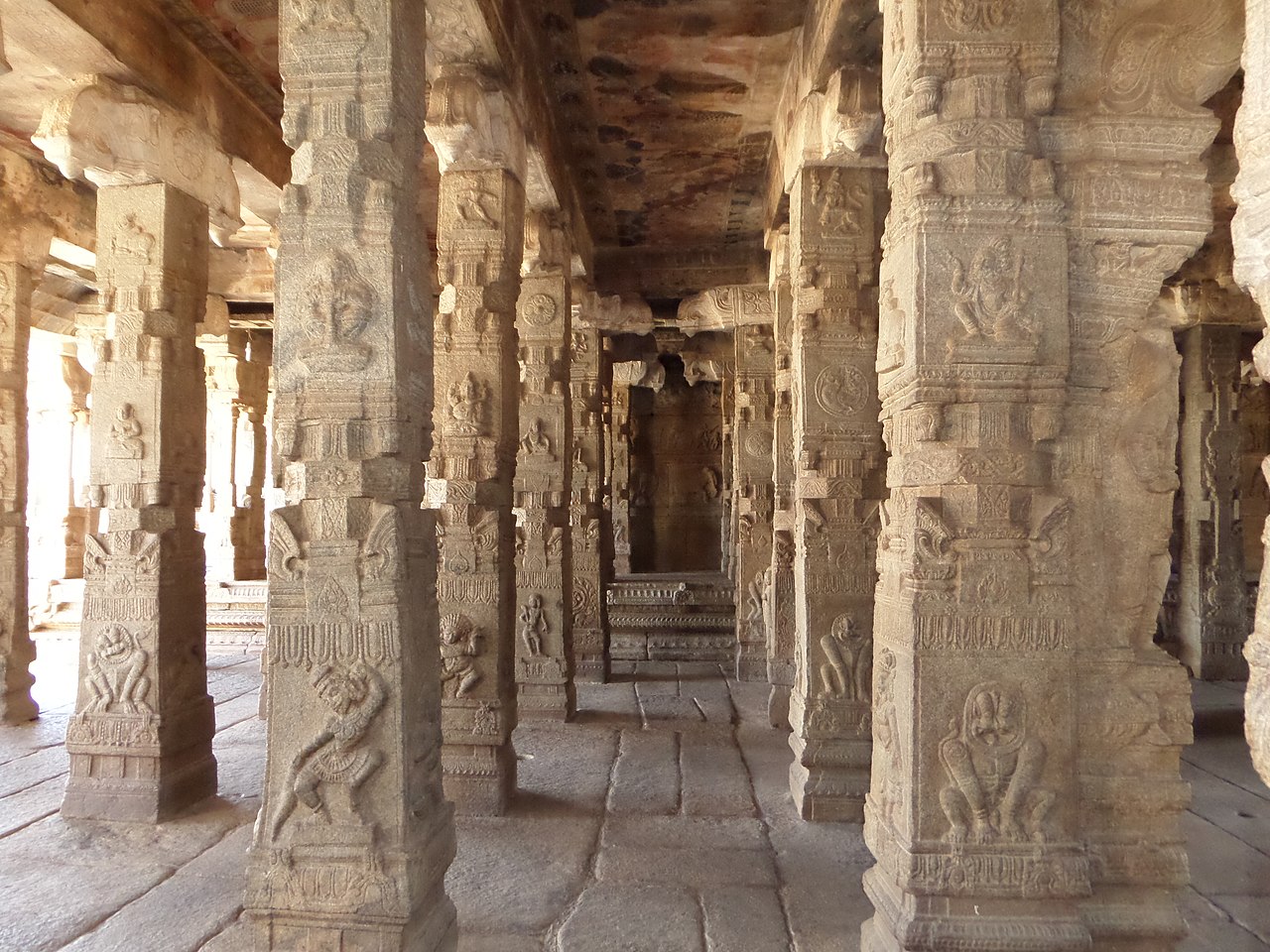 By రహ్మానుద్దీన్ (Own work) [CC BY-SA 4.0 (https://creativecommons.org/licenses/by-sa/4.0)%5D, via Wikimedia Commons 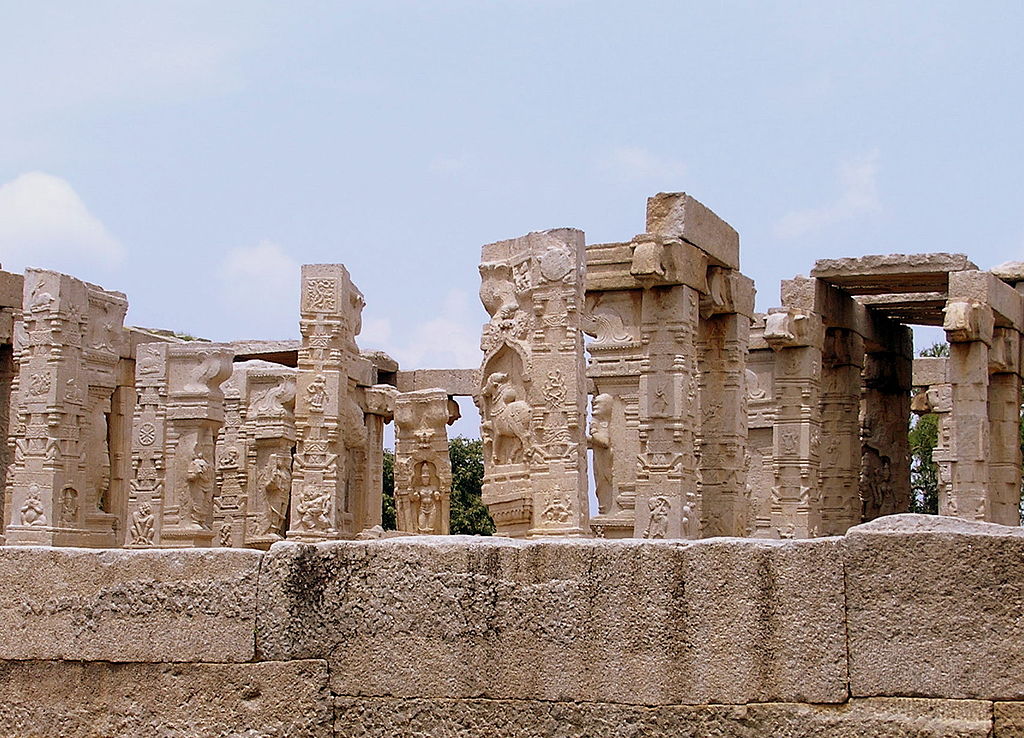 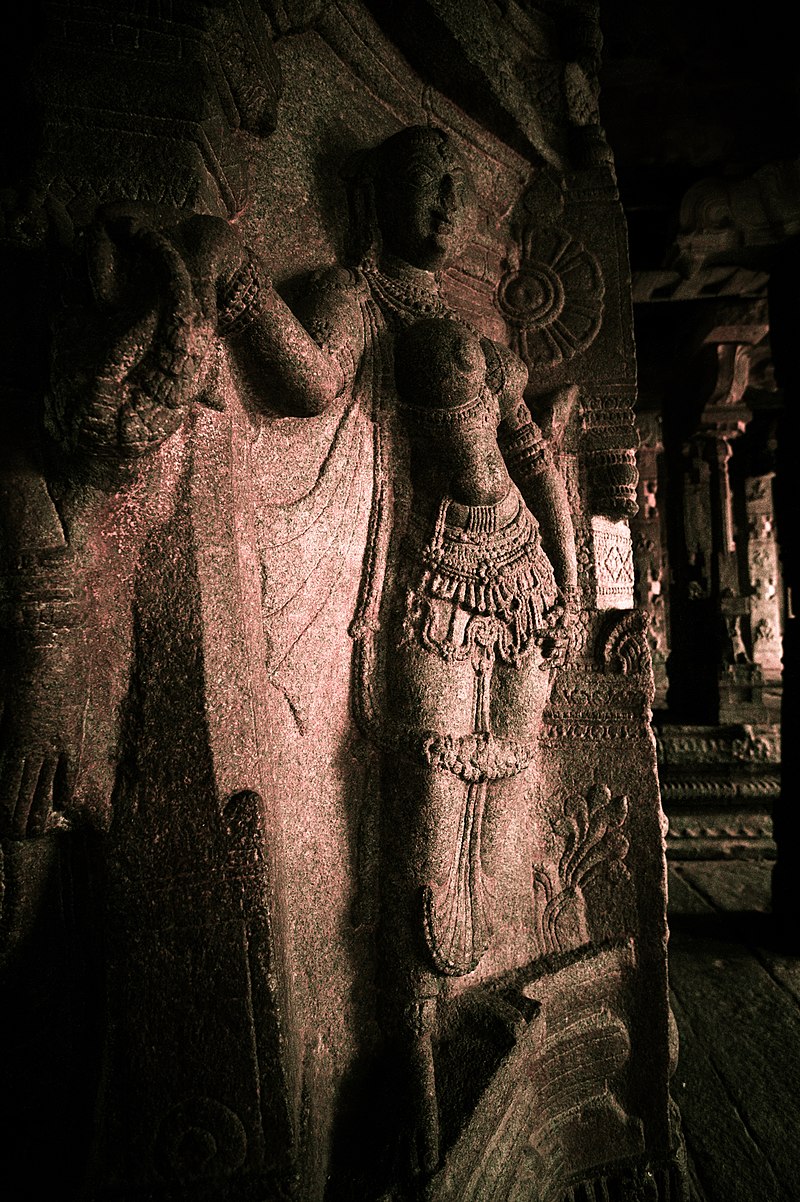