The Kakatiyas ruled over the area called Andhra Desa or Telugu country with Warangal or Orugollu in South India, meaning ‘one stone’ as their capital. The dynasty ruled between 11th and 14th centuries ,1052 to 1323 A. D. They built a fort, temples and created amazing sculptures. At Palampet , a village in the Mulug taluq of Warangal district in present day Telangana, in south of India,exists a lake, green hills and a temple consecrated to Rudreswara known as Ramappa temple situated by the side of Ramappa Lake;it is possible that the sculptor’s name was Ramappa. Built in 1213 by a general of the Kakatiyas, Recherla Rudra ; as is mentioned on the north east pillar inscription .The temple has a main temple and  a nandi manatapa. The temple is built of light brick.  Each wall has a triple storied niche with ornamentation.The other structures include two subsidiary shrines, north and south of the main temple, a dharmashala situated at its southwest. There are two minor temples southwest and north west of the main temple. Smaller shrines are present to the west and the western and eastern end of the bund of the lake.The Kakatiya architects had consulted the Silpa and Agama texts for building the structure.

The Ramappa temple is of a cruciform plan with garbagriha, antarala on the western side.The east, north and south share porticos. The temple stands on a upapitha with space of ten feet around it, which forms the pradakshinapatha. The upapitha has horizontal moldings.The adhisthana and pabhanga are also molded. The pabhanga has elephants and other motifs. The figure brackets which emerge from the outer pillars are madanikas or alasa kanyas and gaja vyalas. These figure brackets spring from outer pillars , appear as supports to the roof projections and have become well-known. 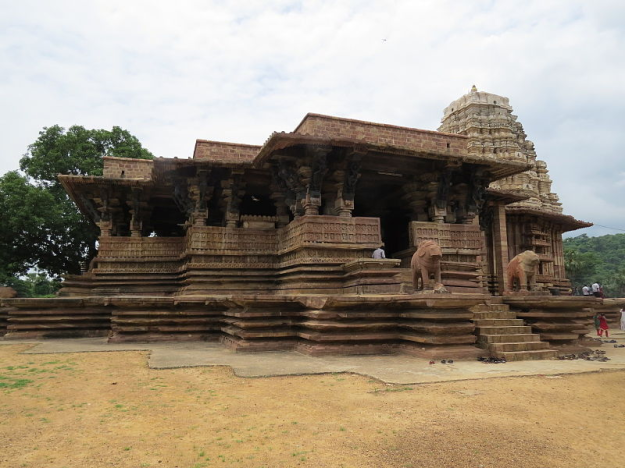 The temple is five feet higher than the upapitha and to enter the temple one has to climb steps. The pillars are arranged in such a way that the ceiling is divided into compartments and each is carved with rich designs. The central pillars are also richly decorated and one can find puranic episodes here. The Rangamantapa or sabhamandapa where musicians used to perform contains ornate pillars with scenes from Bhagavata including Tripura samharam, Gopika Vastrapaharanam etc. The dance postures in the temple inspired Jayapa Senani to compose Nritya Ratnavali.

Decorative gateways lead to the antarala and garbagriha where the linga stands on a black basalt stone pedestal. The subsidiary shrines on the north stand on upapithas and can be reached by steps. The south shrine has a square hall with garbagriha which has no roof. The hall has pillars in the middle and the ceiling has beautiful carvings. Episodes from Ramayana are carved on the pillars.

The madanikas as the bracket figures at the temple, over the outer pillars of the sabhamandapa supporting the cornices at Ramappa temple, are superb examples of Kakatiya art. They display grace and movement and are maidens who have been called shalabhanjikas, alasa kanyas etc. in many contexts in literature and as depictions in sculpture. The word alasa kanya roughly translates as ‘indolent maiden’!

They have different moods and can be alasa,torana,mugdha,manini,dalamalika,padmagandha,darpana, vinyasa,ketaki-bharana,matrumurti,chamara,gunthana,nartaki,sukasarika,nupura-padika or mrudanga-mardini. The madanikas at the temple are in different  postures and depict delicate hand gestures.

The Nagini holds a snake  with another snake hanging over her shoulder. She stands over a serpent with two flying dwarf human figures are on either side.

The dala-malika is wearing high heeled shoes, probably to guard against thorns as she moves through a forest.

The mrudanga- mardini is a beautiful drummer seen in abhanga posture,with two miniature drummers to form an orchestra.

Manini is a shy  woman and is aware of her feminine sensuality. A monkey is seen pulling at her garment. 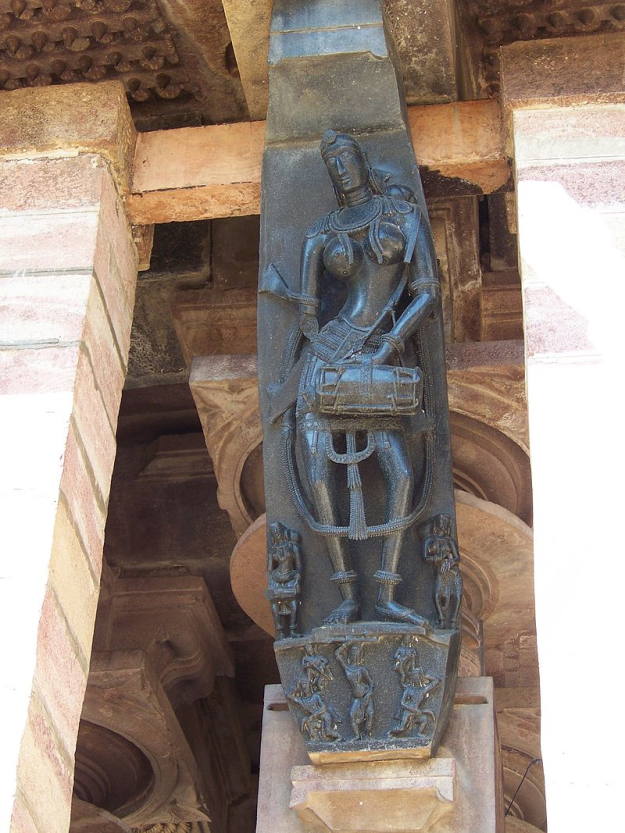 The jewellery in the Ramappa sculptures are a very interesting study in itself. The madanikas wear a variety of jewels from head to toe. The drummer is seen wearing an ornament on her forehead called cheruchukka. A cheruchukka is worn at the start of the hair parting the simanta and connected to a string of pearls. Another hair ornament is the mutyala jalli, a string of pearls attached to a disc at the hair parting and taken to both sides up to reach the ear ornaments.

The huntress is wearing tatankas, haras, keyuras and manjiras. The ear ornament is disc shaped the kanakakamala,  a circular ear ring with a lotus pattern, usually set with rubies.

The manini has big kundalas with gems studded in the inner tier. Almost all the madanikas are wearing finger rings on all fingers of the hand.

The mekhala is worn by the madanikas; one of them has a waist girdle with three valayas, each having many strands of beads each having a  gem as the centrepiece.

Above the anklet the khadiyas are worn. The nartakis are wearing the one which is a tiered ring with beaded fillet. The hamsakas are worn over the feet.

Most of the madanikas are wearing a short garment below the navel  up to the mid-thigh and the beaded bands on the thighs help in holding the garment to the body. The nivibandha or kativastra hangs down between the legs. This is also decorated with beads or pearls.  On the upper thigh of the nartakis on each side, are seen a beaded garment folded in the form of a trident or trisula. The manini is seen wearing a piece of cloth with horizontal plain folds around her waist, which the monkey is pulling. The piece of cloth resembling a saree, worn by the dala-malika has flower designs in rows.

The madanikas are seen wearing haras or necklaces and big garlands or kanthikas,  keyuras and kankanas on their hands. The hair ornaments are mostly having a single string with small beads with or without a pendant, hanging from the hair parting, the simanta.

The art and architecture of the Kakatiyas by B. Satyanarayana Singh, Bharatiya Kala Prakashan, 1999.

The Kakatiyas ruled over Telugu country or Andhradesa for two centuries . Warangal or Orugollu meaning ‘one stone’ was their capital. They ruled between 11th and 14th centuries,1052 to 1323 A. D. They built a fort, temples and created amazing sculptures.The early Kakatiyas worshipped Goddess Kakati or Kakatamma. Early records indicate that Venna was the founder of the Kakatiya rule. They initially served as feudal chiefs of the Rastrakutas. Venna was succeeded by Gunda I. The others who followed include Gunda II, Gunda III, Gunda IV. By the end of the 10th century A.D. the Kakatiyas became vassals under the Chalukyas of Kalyani; Beta I, Prola I, Beta II, Duggaraja and Prola II. Prola II asserted independence who was succeeded by Prataparudra I or Rudradeva. Mahadeva, his son ruled for a very short time after that (1198-99).His son was Ganapati deva Maharaja who was one of the greatest Kakatiya kings. He was succeeded by his daughter Rudramadevi who died in battle. She was succeeded by Prataparudradeva (1289 -1323), the last ruler who died when captured and being taken to Delhi in 1323. A.D.

The Warangal fort with its impressive thoranas  and  two walls was mainly built during the reign of King Ganapati deva who wanted to build a cosmic pattern fortress. It was completed by his daughter Rani Rudramadevi in 1261 A.D. The fort had 45 towers and pillars, probably a third wall spread over a radius of 19 km. The remains of the  swayambhu temple are at the centre with four pathways leading to it with lofty gateways or thoranams called keerthithoranams which are still visible today. The architecture has evolved from the later Chalukyan style but are representative of  Kakatiya architecture. The other famous temples at Hanamkonda and Palampet at  a distance of 12 and 65 kilometres respectively are the Veyi Stambha gudi( 1000 pillared temple) and Ramappa temple.

The thoranams were an important part of the temple architecture of the Kakatiyas which lend the enclosed temple additional grandeur. The plan of any temple depends on its spatial arrangement. The keerthi toranas are present at four cardinal points of the temple. These thoranas resemble the ones at Aihole, Karnataka. The thorana is large, massive and has double pillars on each side and the extreme ends of the lintels are decorated with hamsas with makaras at the centre. Overall the thorana is highly decorated structure with flower designs and geometric motifs and is very imposing to the onlooker gazing upon it.

A workshop maintained by the kings existed in Warangal which employed sculptors  and temple builders bought their work. All over Telangana their work can be found in ceilings, pillars, doorjambs, friezes and lintels. 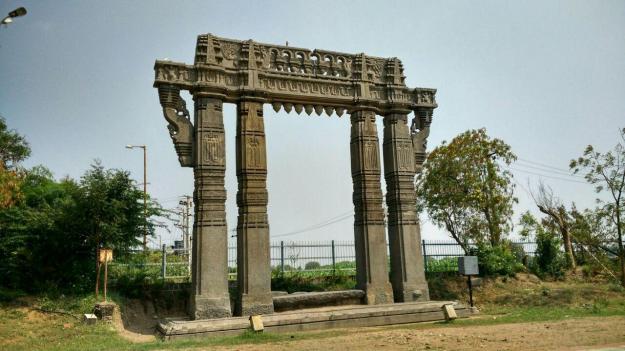 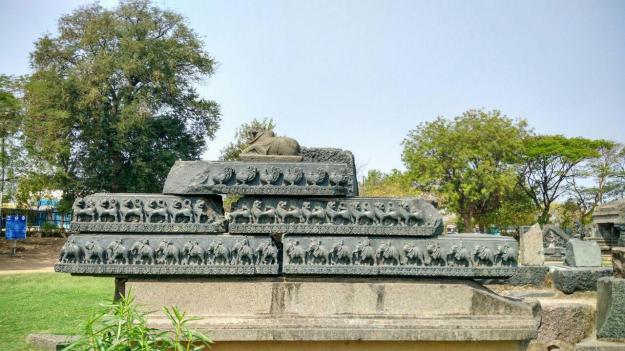 The circular fort has an outer earthen wall and an inner masonry wall. The four gateways are at the  four cardinal points. The swayambhu gudi, a temple of Siva has been partly repaired has a closed mandapa and open porch in front of which lie a group of broken images, three nandis and several lingas including a chaturmukhalinga.

Portions of old pillars containing inscriptions lie in front of the temple.The fort complex has the temple Medrayanigudi, in which sixteen columns support the roof of the mandapa. Virabhadragudi contains two large dwarapalas and a beautifully carved nandi. Visnugudi too has an open pillared mandapa with dwarapalas. Venkatesagudi has a pillared hall and before the mandapa has a shaft of a richly carved shrine and ante-chamber. Nalasambugudi lies in the south of the fort. Near the south gate is Mulasambugudi. Towards west gate is the Erlalgudi with an open pillared hall. The north west of the fort had Tellagudi. The fort complex seems to be built in stages, the eastern structure was built by Ganapatideva, the western mandapa and the thoranams seem to have been built by Rani Rudramadevi.

Four main toranas are monolithic and built from grey granite. The entire fort area is full of beautiful architectural pieces with rich carvings and made of black basalt, red stone and grey granite. Some of them are : a thick slab with lions, frieze with a row of elephants, pillars with dancing figures, door jamb with female dwarapalas, doorjamb with jali window,red triangular stone with large simhalata and figures in fighting postures,stone pillar with ornately carved human figures,roof slabs in red stone, lintel which may be one of the central pillars of a rangamandapa, seal with a frieze of swans etc. Some of the important motifs of Kakatiya art are gaja kesari,kirtimukha ,hamsa,alasa-kanya and kolata motifs. 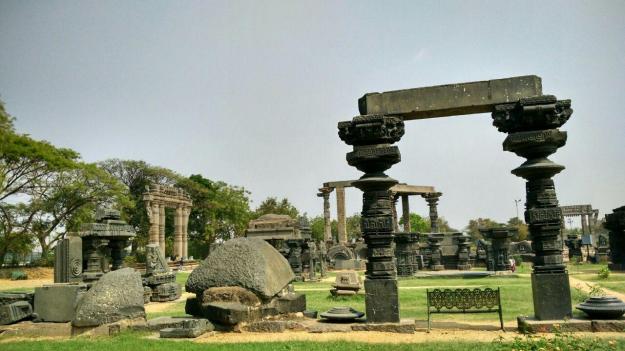 The art and architecture of the Kakatiyas by B. Satyanarayana Singh, Bharatiya Kala Prakashan, 1999.