Much has been written about the Taj Mahal, India’s iconic Mughal monument. A testament to love as it is believed, made by an emperor, Emperor Shahjahan for his favourite queen, Mumtaz Mahal or Arjumand Bano Begum. One is awestruck on seeing the Taj made from marble from Makrana which depicts so many elements of art and architecture. One can see domes, arches, minarets, windows, ceiling designs, parchin kari or pietra dura, calligraphy, Islamic geometry. Also jaali or trellis work. The finial on top of the biggest dome is also very ornate. Different views from the Taj show the beautiful embellishment and the exquisite use of marble to create this awesome wonder of the world. This mausoleum or rauza is one of the finest monuments of the world.

This famous edifice is at an important Mughal city, Agra on the banks of the Jamuna river. Agra also has an awesome fortress, the tombs of Emperor Akbar, his consort, Jodha Bai and Vizier I’timad-ud-daulah of Emperor Jahangir. The chief architect of the Taj was Ustad Ahmed Lahori. The design is a synthesis though the Persian element is predominant.

Aye, build it on these banks,” the monarch said,
“That when the autumn winds have swept the sea,
They may come hither with their falling rains,
A voice of mighty weeping o’er her grave.”

They brought the purest marble that the earth
E’er treasured from the sun, and ivory
Was never yet more delicately carved :
Then cupolas were raised, and minarets,
And flights of lofty steps, and one vast dome
Rose till it met the clouds : richly inlaid
With red and black, this palace of the dead
Exhausted wealth and skill. Around its walls
The cypresses like funeral columns stood,
And lamps perpetual burnt beside the tomb.
And yet the emperor felt it was in vain,
A desolate magnificence that mocked
The lost one, and the loved, which it enshrined.

The Taj Mahal is situated a mile distant from the Agra Fort at a bend of the river Jamuna. The Taj was built on a large square area out of Raja Jai Singh’s garden. The Taj is considered a place of pilgrimage because Mumtaz Mahal had died during childbirth, ie. it is both a rauza and urs, hence it was designed keeping in mind the needs of both. there is designed place for pilgrims to stay, poor to receive food and gift of clothes etc. The Taj has a forecourt and gardens. The charbagh, mosque and tomb were built in the larger portion, ending in an open platform and raised terrace with the river in view. The mausoleum was placed on this terrace. The gateway at the southern end was the public entrance. The gateway at the northern wall of the forecourt is a three storeyed gateway.

The Taj unfolds as one walks through the monument. The outer gateway opens to a  large quadrangle surrounded by arcaded rooms and adorned by four gateways This monument took 22 years to build. A broad pavement leads to a gateway made of red stone and inscribed with verses from the Holy Quran. As one moves on, one can see  beauty and embellishement. There are the jaalis, pietra dura works as beautiful arabesques. Some views here are testimony to some splendid floral designs at the Taj. 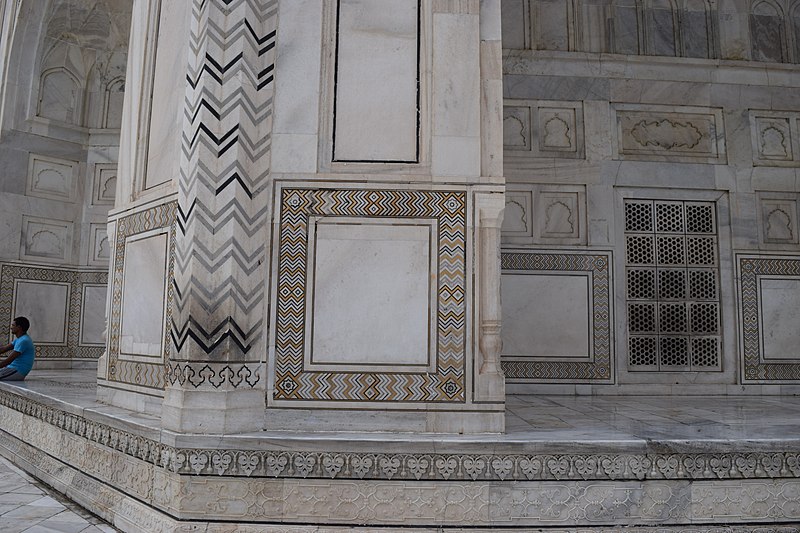