Surya is the Sun God or God of light. There are many myths about heavenly bodies. The worship of the Sun in very ancient.The Sun is worshipped in many cultures. The Rigveda has hymns dedicated to the Sun proclaiming it as the only God.The Puranas refer to sun as Aditya, son of sage Kashyapa and Aditi. Different names of Surya in ancient Indian literature include Aditya, Arka, Bhanu, Savitr, Pushan, Ravi, Martanda, Mitra and Vivasvan. Savitr refers to one that rises and sets, Aditya means one with splendour, Mitra refers to the Sun as friend of all mankind.  Pushan refers to Sun as illuminator that helped the devas defeat the asuras who use darkness. The term Arka is found more commonly in temple names of north India and in the eastern parts of India. The 13th century Konarak Temple in Odisha comprises of Kona and arka ; ie. Arka in the corner.

The Suryavamsha or solar dynasty of kings take its name from the God of light, the Sun. The Swastika, a Hindu symbol is believed to be solar in origin. It means to be and be well.  It indicates that though life is a bewildering maze,  the path of light runs through it.The mystic sound of Aum or Om can also  be linked to the Sun. It not only represents the solar fire but also the Trinity of Gods in Hinduism. The syllable is written inside a circle which represents the orb of the Sun.

In art depictions Surya is shown as a dark-red man with three eyes and four arms, holding lotuses,riding a chariot drawn by seven horses, each depicting a day of the week. The seven horses are also named after the seven meters of Sanskrit prosody, Gayatri, Brihati, Ushnih, Jagati, Trishtubha, Anushtubha and Pankti. His charioteer is Arun, the dawn, brother of Garuda and has no legs. The Gayatri mantra is dedicated to the Sun.

Hindu texts attribute different characteristics to Surya. The Brihatsamhita describes Surya having two hands, wearing a crown. The Vishnudharmottara  describes Surya with four hands, two with lotuses, a staff and a pen and palm leaf in the others. Two goddesses of dawn, Usha and Pratyusha flank him, shooting arrows, challenging darkness. The iconography of Surya varied over time; it has shown Greek , Persian influences.

Surya is part of the navagraha or nine planets in the Hindu zodiac system. Hindu astrology is based on the Sun similar to the Greek system.   In yoga, the Surya namaskar is a salutation to the Sun, comprising of twelve different postures or asanas. 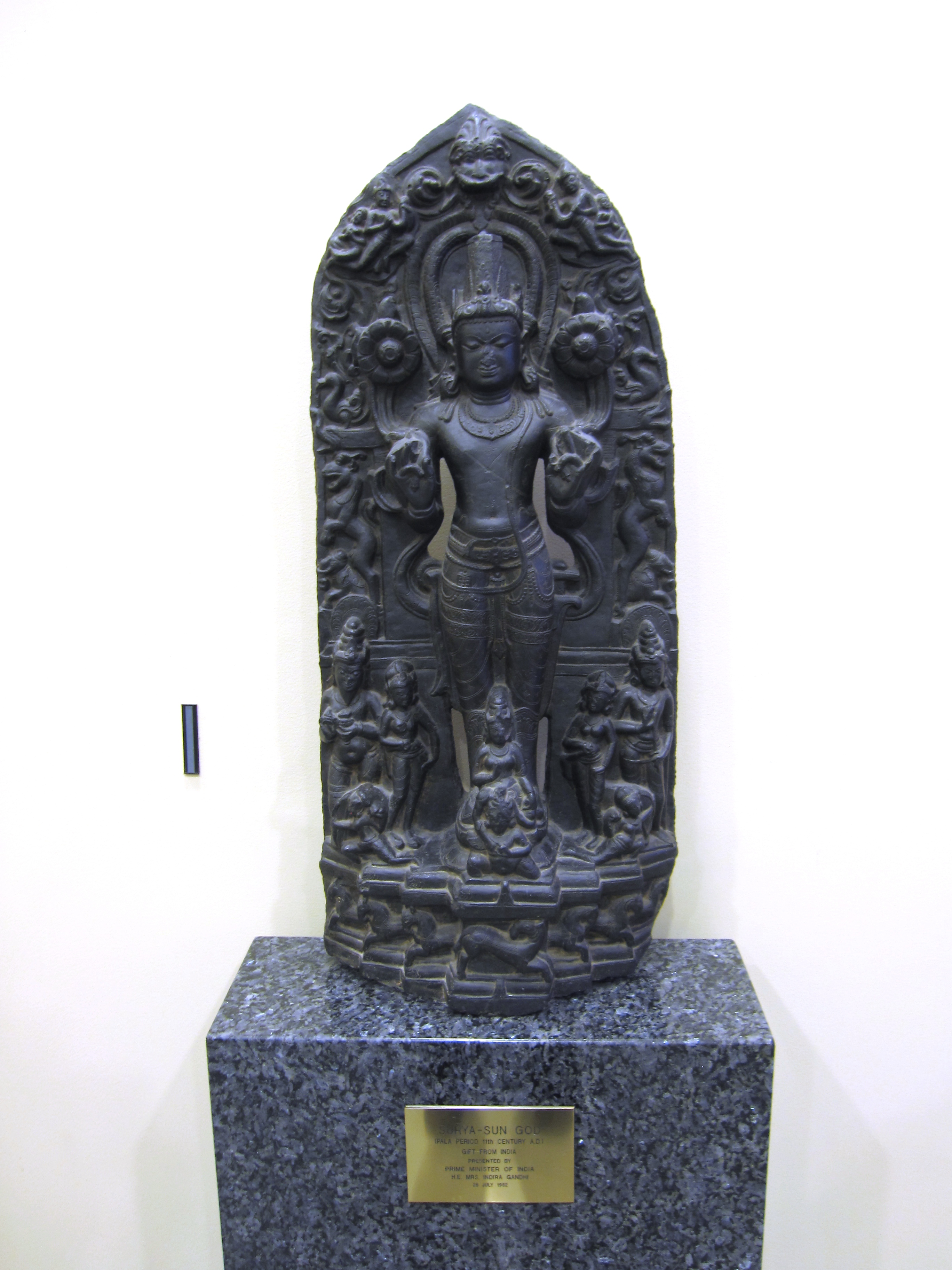 By Gryffindor (Own work) [Public domain], via Wikimedia Commons

The most famous Surya temple in India  is the Konarak temple in Odisha. The temple architecture is built as a grand chariot with twelve wheels pulled by seven horses. Other sun temples include the one at Modhera, Gujarat, Arasavalli, Andhra Pradesh, Kanakaditya temple,Maharashtra,Galtaji’s temple, Jaipur,Kattarmal Surya mandir, Almora,Uttarakhand.

The sun temple known as Jayaditya was constructed at Bharukaccha district (earlier known as Bharuch) in Gujarat by a Gurjar King, Jayabhatta II, the Gurjars being ardent sun-worshippers. Another temple Jaggaswami Surya temple at Bhinmal (now in Rajasthan)was also made in the medieval period.

Surya deul, a sun temple in the shape of a chariot, 13th century,Konarak, Odisha.

Depicted below is the Surya Majapahit or The Sun of Majapahit ,the emblem commonly found in temples and ruins from Majapahit era (1293 – 1500s). Some scholars suggest that this sun disc was the royal emblem of Majapahit, probably  the coat of arms of Majapahit empire. The sun disk is stylised with carved rays of light; surrounded by eight Lokapala or dikpala gods, the eight Hindu gods that guarded eight cardinal points of the universe. 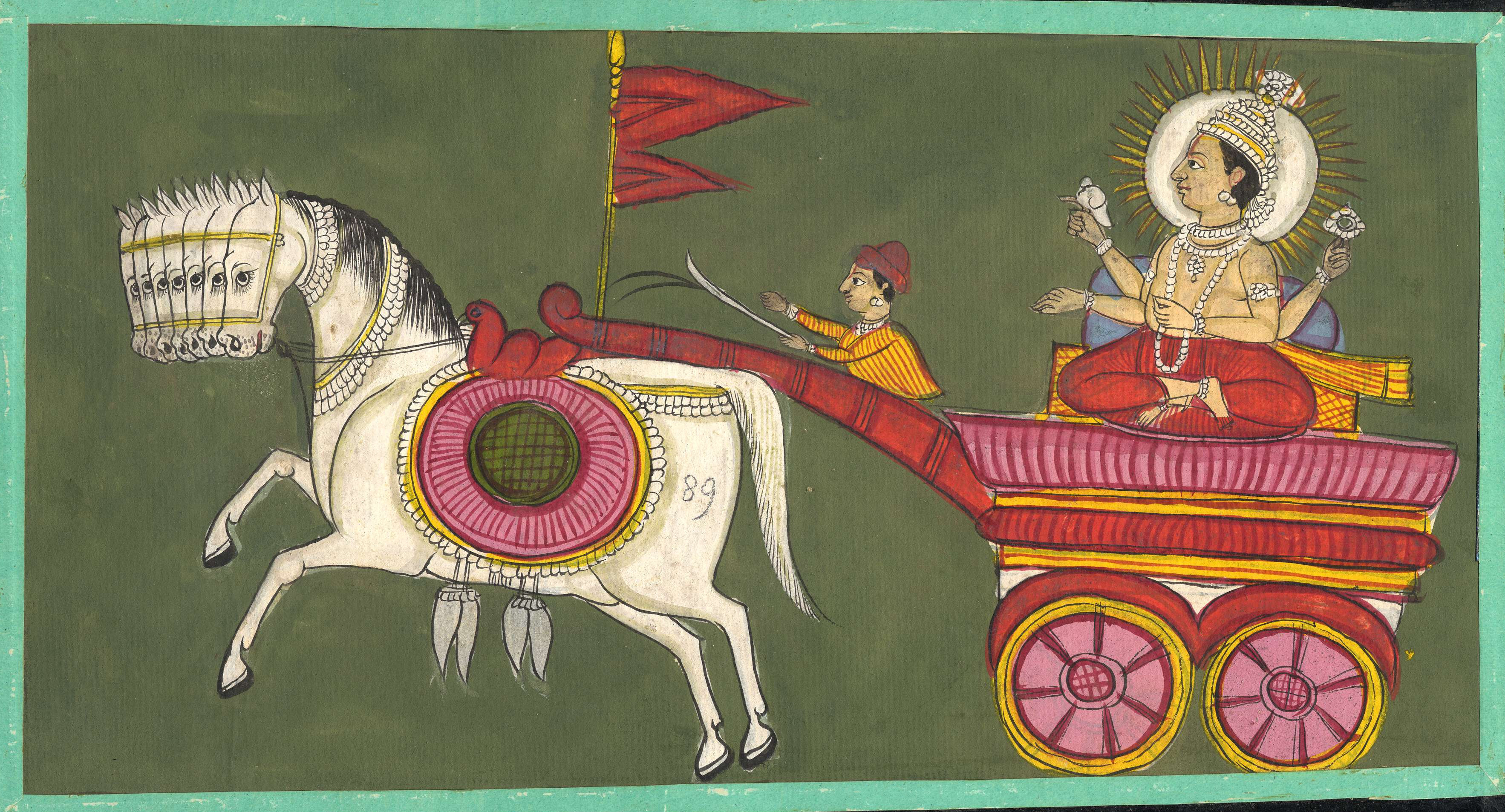 Surya is celebrated as a deity in Buddhist works of art and religious significance, such as the ancient works attributed to Emperor Ashoka. Surya is depicted in the Mahabodhi temple in Bodhgaya, Bihar. In some Buddhist artwork, his chariot is depicted as being drawn by four horses. The doors of Buddhist monasteries of Nepal show him, along with Chandra, the moon god, symbolically with Surya depicted as a red circle with rays. Shown below is a Surya mandala painting from Tibet,most probably from the 14th century.

Painting below depicts Surya receiving worship from the multitudes;  Surya on his chariot surrounded by attendants with smaller figures at left in obeisance.

Boats under the fading sun at Key West,photograph,21st century, Florida,USA.