The story of Shakuntala and King Dushyanta is from the Indian epic Mahabharata and retold by poet Kalidasa in his Abhignanashakuntalam . It is a very popular story in India.

Shakuntala was born to apsara Menaka and Sage Viswamitra. Viswamitra however refused to accept the child. Sage Kanva found her in a forest and surrounded by shakunta birds. He named her Shakuntala; on who is protected by shakunta birds. Shakuntala grew up to be beautiful damsel. One day King Dushyanta who the son of Ilina and Rathantara and king of Hastinapur and ancestor of the Kurus;  was travelling through the forest with his entourage and trying to hunt down a male deer. He meets Shakuntala and both fall in love with each other. He spends time with her and they have a Gandharva marriage. Before leaving back for his royal duties, he gives  Shakuntala his royal ring, promising he would return to take her to his palace.

During Dushyanta’s absence Shakuntala kept dreaming about him. One day while she was lost in thoughts of Dushyanta, Sage Durvasa came to the ashram where she lived, but Shakuntala did not greet him properly. He cursed her saying that the person she was thinking about would forget her. Immediately her friends came and intervened and the sage modified his curse saying that he would remember on showing a personal token given to her.

Much time passed but King Dushyanta did not come to take her. She along with some companions set out for the city along with age Kanva. On the way they had to cross ariver by a boat and finding the blue water, Shakuntala ran her hand through it. The ring given by Dushyanta slipped out of her finger without her realising it. She reached Dushyanta’s court but he failed to recognise her. Her ring too had gone missing so Shakuntala had to return. She was devastated by the happenings and in grief settled in the wild forest along with her son Bharata. Bharata, surrounded only by wild animals, grew to be a strong youth and made a game of opening the mouths of tigers and lions to count their teeth.

However fate had other plans. The ring was swallowed by a fish. A fisherman was surprised to see a royal ring in the stomach of  a fish and took it to the palace. On seeing the ring, King Dushyanta recalled everything !

He set out for the forest and came to the ashram where Shakuntala used to live. On not finding her, he started roaming in the wild forest looking for her. He came upon a young boy who was playing with lion cubs. He asked him his name. He replied saying he was Bharata, King Dushyanta’s son. The king was very happy and the boy led him to his beautiful bride Shakuntala and the family was reunited.

Some different versions of the story too exist and has been retold by many authors. According to one version apsara Menaka takes Shakuntala to heaven after Dushyanta fails to recognise her and Bharata is born there. King Dushyanta then had to fight with the devas to get her back along with his son Bharata. Bharata is believed to have become the emperor who founded the Bharata dynasty of India and the name Bharatvarsha is after the same dynasty. 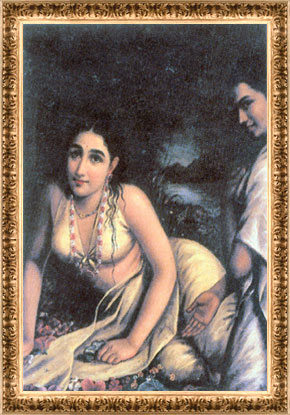 Dushyant and Shakuntala in a landscape, folio from a Mahabharata, 1800, Kangra,Himachal Pradesh. 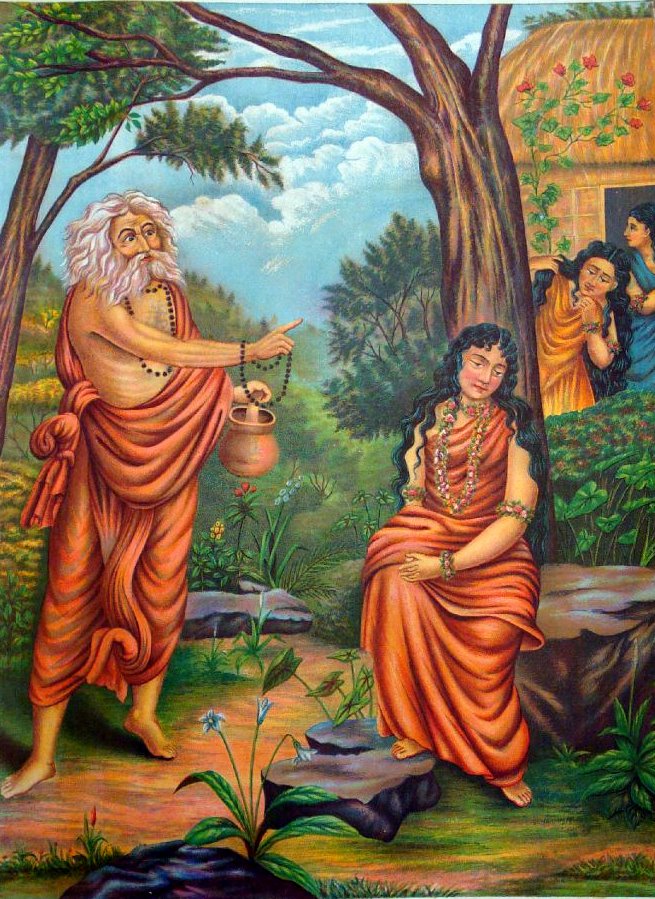 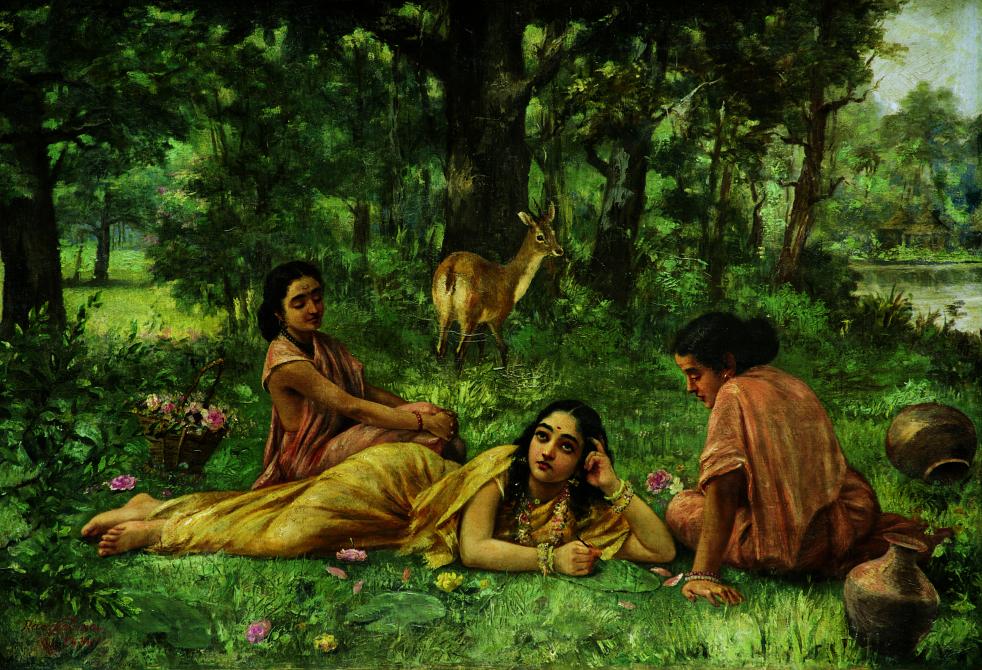 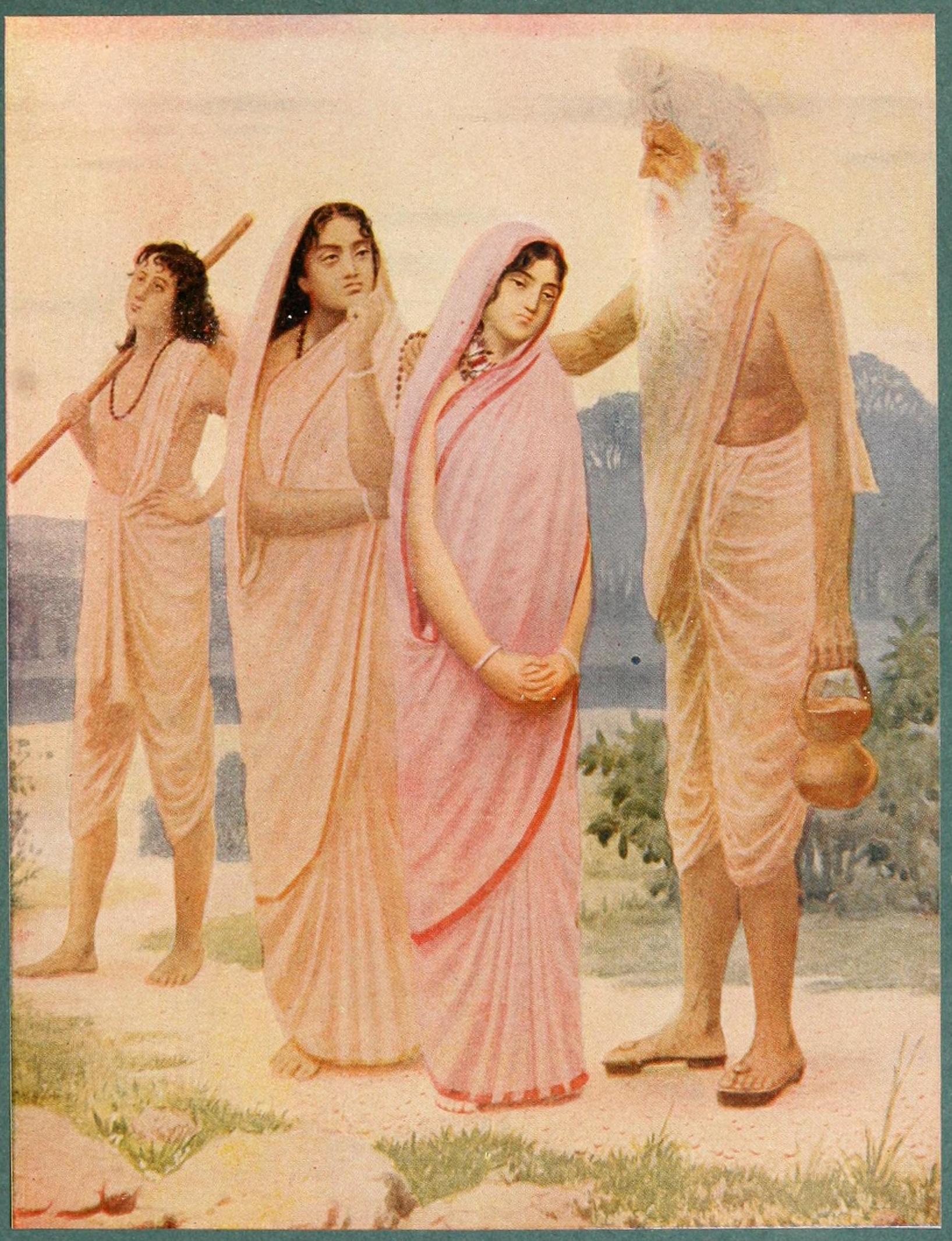 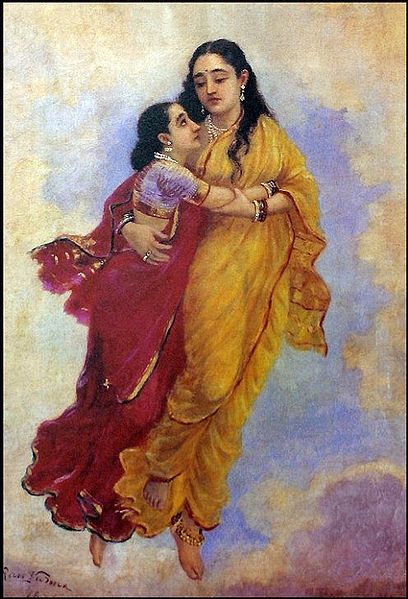