Stambha is a column with cosmic connotations, a connection between heaven and earth. Stambhas have been mentioned in early Hindu literature like the Atharvaveda.

The dhwaja stambhas are placed in front of the main deity of a temple; kirti/vijay stambhas usually commemorate victories. The Ashoka pillars depict the royal edicts of King Ashoka of the Mauryan dynasty. The deepa stambhas are lit up on festival days at temples.

There is a magnificent vijaystambha ot tower of victory, also referred to as kirtistambha or tower of glory at Chittorgarh Fort in Rajasthan dedicated to Lord Vishnu. Built by Rana Kumbha in 1448 to celebrate his victory over Mahmud Khilji fighting the armies of Malwa and Gujarat. The tower was designed by architect Sutradhar Jaita. The genealogy of the kings of Chittor and names of the architect and carved on the tower.

The image of Padmavati, Jain Goddess is on the top story. The word Allah is also carved in the third and eight stories.

The Ashoka pillars were columns built by Maurya king and emperor Ashoka during 3rd century B.C. These pillars were inscribed with his edicts. Nineteen pillars still exist with the inscriptions. Six of them have lion capitals and some had the bull. The pillars weigh 50 tonnes in weight and were average 15 m in height. They were transported between large distances to their destinations. The pillars were carved out of red-white or buff-coloured  sandstone, mostly at Buddhist monasteries after being brought from Chunar and Mathura. 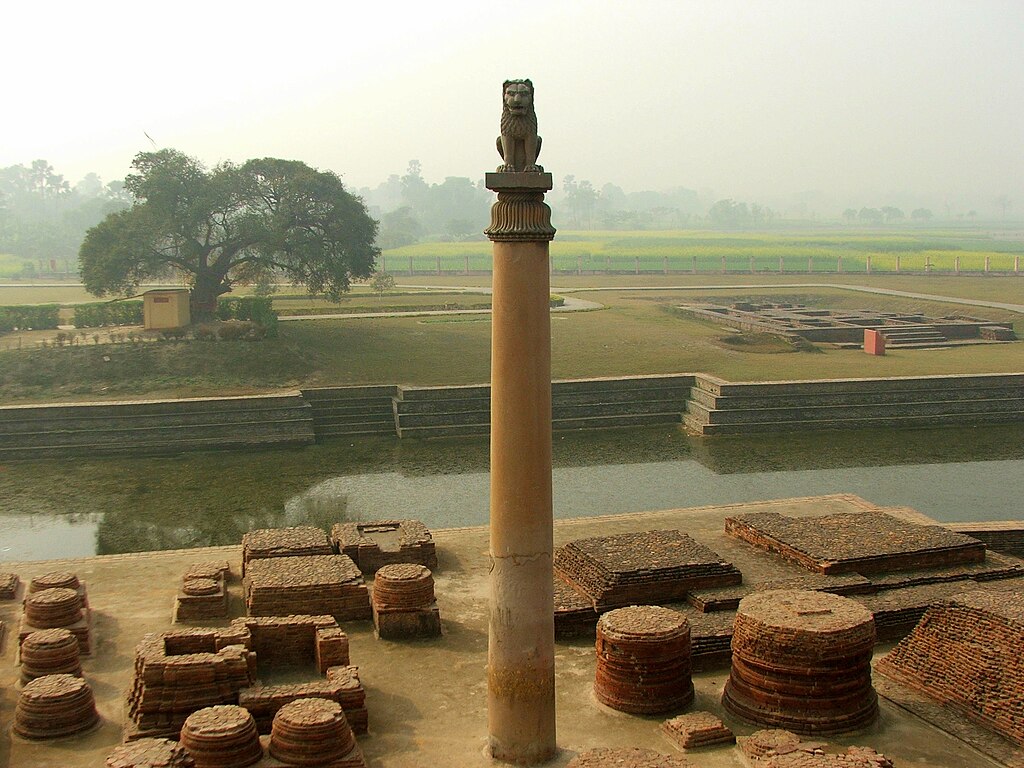 The Ashoka pillar of 13 m height, at  Ferozeshah Kotla at Delhi was originally at Topra in Ambala from where it was brought and reinstalled at Delhi by Feroze Shah.

By Praxipat (Own work) [CC BY-SA 4.0 (http://creativecommons.org/licenses/by-sa/4.0)%5D, via Wikimedia Commons

At the Virupaksha temple at Pattadakal in Karnataka is a victory pillar with inscriptions from the eighth century. The inscription relates the victory of Vikramaditya II of the Badami Chalukya over the Pallavas of Kanchipuram.

A brahma stambha stands in front of the Parsvanatha Basti on top of the Chandragiri Hill at Sravanabelogola in Karnataka’s Hassan district. The temple was built in the 11th century and is called Kamata Pasrvanatha Basti.The image of Parsvanatha stands on a lotus pedestal. Lord Parsvanatha is  the 23rd Jain Tirthankara and who had an encounter with his enemy Kamata. In late 17th century a manasthambha, also referred to as Brahmastambha facing the temple, 65 feet in height was erected.

The Kolaramma temple is dedicated to Goddess Parvati worshipped as Kolaramma. She is the presiding deity of Kolar in Karnataka. It was built 1000 years ago. by the Cholas. Ornately carved statues from granite stone, lend splendour to the temple which the Maharajas of Mysore used to visit regularly. The second deity at the temple is Chellamma who protects from scorpion-bites. The Hundi of the temple is believed to have a large hole dug into the earth from where one can still hear the sounds of the coins collected over hundred of years.

In the Hutheesing Jain temple at Ahmedabad,Gujarat which was built in 1848 dedicated to the 15th  Jain Tirthankara,Dharmanatha. Hutheesing was a rich trader who helped traders by building the temple so that they could be engaged in work during drought which lasted two years. Designed by Premchand Salat, the main building is  double storied. The temple houses 11 deities and an additional 52 shrines. The temple has a manastambha or a column of honour.

The Shantadurga or Santeri temple near Panjim in Goa is dedicated to Goddess Shantadurga who is believed to have mediated to stop the quarrel Between Lord Shiva and Lord Vishnu of the Hindu trinity. The temple was built during the reign of King Shahu, grandson of Shivaji in the 18th century between 1713 to 1738. The temple had undergone many modifications and Neo-classical architecture can also be seen. On the left side of the courtyard is a deepastambha which is lit up with oil lamps on festival days. 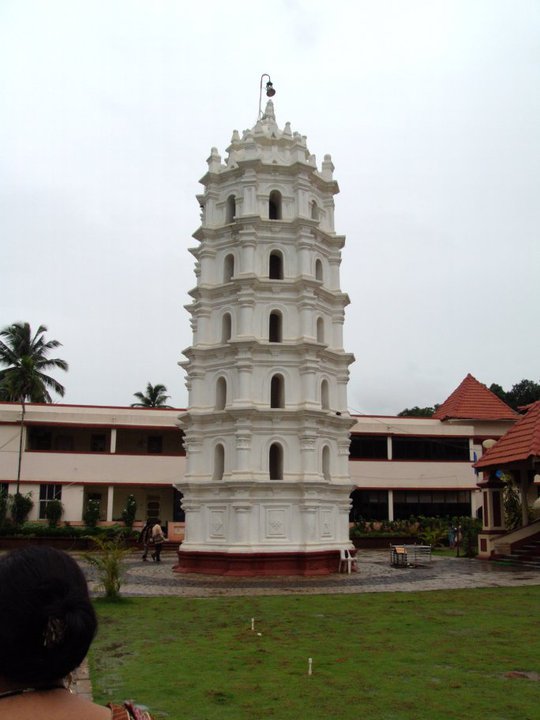 The ruins at Hampi conjure images of an era gone by, of mighty dynasties who once ruled . Such are the vagaries of time. But the splendour of the structures remaining speak volumes of the past and the depict richness of Indian architecture which capture both the ordinary and the cosmic. In Hampi, Hospet in Karnataka’s Bellary district in present day Karnataka, there is a belief that this is the place of Kishkinda of Ramayana.

Archaeologically speaking, Bellary district has some rock edicts of King Ashoka. Buddhism was prevalent in the region in the first and second centuries A.D. The area has been ruled by Chalukyas of Badami, Rashtrakutas Chalukyas of Kalyani, the Hoysalas and the Yadavas.

The most splendorous temple at Hampi is the Vitthala temple. Vitthala is a form of Lord Vishnu worshipped in Karnataka and Maharashtra.   Vishnu has ten incarnations and sculptural representations are seen carved on various pillars of the temple. It is a huge temple complex and has entrance gateways on three sides. In the middle of the courtyard complex lies the main shrine. This was built before the sixteenth century. Devaraya II  ( 1422-46 A. D.) most probably started the temple. Krishnadevaraya added many structures to it. The east facing temple has garbagriha,antarala,pradakshinapatha,sabhamandapa, mahamandapa, kalyanamandapa, and devi  shrine for Rukmini, consort of Vitthala.The Vahana mandapa is the in the form of a chariot dedicated to Garuda, the vehicle of Lord Vishnu.The garbagriha and sabhamandapa are square shaped. The sabhamandapa stands on four central pillars which is set on a raised floor. The mahamandapa stands on 56 pillars.sculpted out of the granite stone elevated on an ornate base decorated with friezes which include horses horses with attendants and smaller shrines with ten incarnations of Vishnu. The ceiling is decorated with lotus and other motifs. The mahamandapa is supposedly having musical pillars.  Pillars supporting the roof is supported by a pillar representing a musical instrument and is constructed as seven minor pillars around a main pillar. Thirty inscriptions have been found in the complex. The gopurams were donated by Chinna devi and Tirumala devi, queens of Krishnadevaraya who built the hundred pillar hall in 1516. 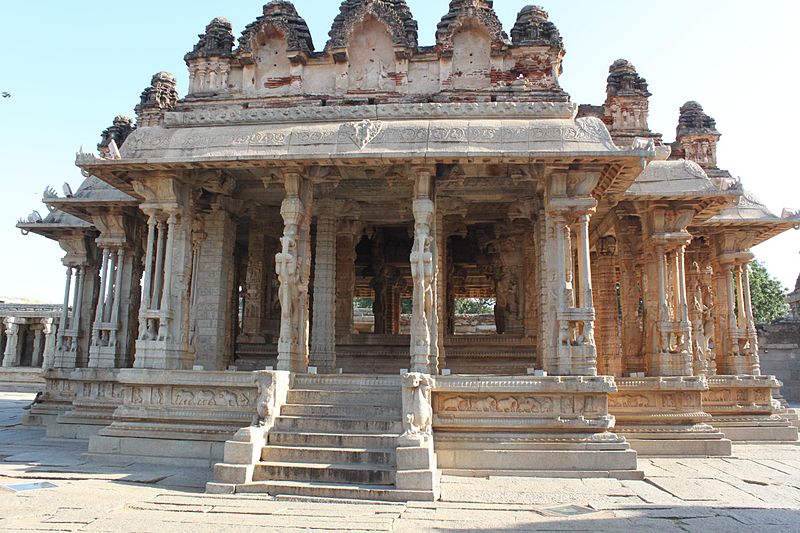 By Dineshkannambadi (Own work) [CC BY-SA 3.0 (https://creativecommons.org/licenses/by-sa/3.0)%5D, via Wikimedia Commons

The Kalyanamandapa is an open mandapa standing on 48 pillars having three entrances, towards the southern side of the complex. The pillars depict the Dasavataras, Garuda, Hanuman, dancers and saints.

The Uyalamandapa having two entrances is on the southern side which stands on 44 pillars. At the northern end sixteen pillars are raised and a wall has been constructed.

The Vahana mandapa consists of a chariot- temple dedicated to Garuda, vehicle of Lord Vishnu. this is called vitthala ratha temple. It is believed that the world will end the day the chariot is moved from its place. The ratha is built in Dravidian style of architecture, on a rectangular base decorated with mythical scenes. the ratha has four heavy granite decorative stone wheels attached to it movable on axis shafts. in front the chariot has two elephants giving one the impression that they are pulling the chariot. it is believed that originally there were horses in the place of elephants. Between the elephants there is a ladder leading to the shrine.

From a postcard on Hampi

On the  southwest side a one hundred pillared hall, Nooru Kamba mandapa made by Krishnadevaraya with entrance towards east, is present.

Southwest to the Vitthala temple is the Tulapurushandana(King’s Balance) made up of two carved granite pillars with a granite lintel in between which has a stone loop in the centre. Scales were hung on special days and the Raya/king was weighed against gold or precious stones, which were given away in charity.