The story of Nala- Damayanti figures in the Hindu epic Mahabharata. Artists have captured the sequences in paintings and illustrations. This story never gets old and is timeless. Nala is the king of the kingdom of Nishada, an expert with horses and culinary matters. He gets married to Princess Damayanti of the kingdom of Vidarbha. She is very beautiful and was in love with Nala because she had heard about his virtues from a golden swan. The same golden swan had been caught by Nala who had released it on hearing about Damayanti‘s exceptional beauty and the swan having promised to convey to her Nala’s message of love. The swan was thus  a messenger between them. A swayamvara, where the bride chooses her husband, was set up for the hand of Damayanti. The Gods Indra, Agni,Varuna and Yama too wanted her hand.  Nala had met the Gods on his way way to the event and had been asked by the Gods to be their messenger. They wanted Damayanti to choose one of them. However in spite of wearing a robe which made him invisible to all except Damayanti, she recognised him and selected him as her husband.The Gods even disguised themselves as Nala, but she saw though them and chose Nala in the swayamvara ceremony. The Gods left blessing the couple.

By Internet Archive Book Images [No restrictions], via Wikimedia Commons

The demon Kali ( evil spirit of Kaliyuga) also wanted to marry Damayanti. But on hearing of her choice he vows to ruin Nala and decides to separate them and ensure that Nala leaves the path of dharma or righteousness. Damayanti and Nala are happily married and have two children. It takes Kali twelve years to trap Nala.  Nala is fond of gambling and under the influence of evil plays a game of dice with his brother Pushkara. He ends up gambling away his kingdom and wealth. Nala-Damayanti have to go to the forest where they live in poverty for three years and even get separated ; Nala starts worrying for Damayanti, and abandons her  to protect her from his bad fortune. 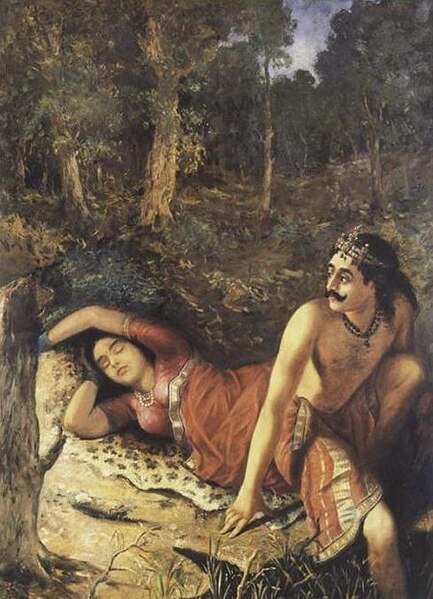 Nala with Damayanti, depicted cutting of part of her garment,illustration,Mahabharata, early 20th century. 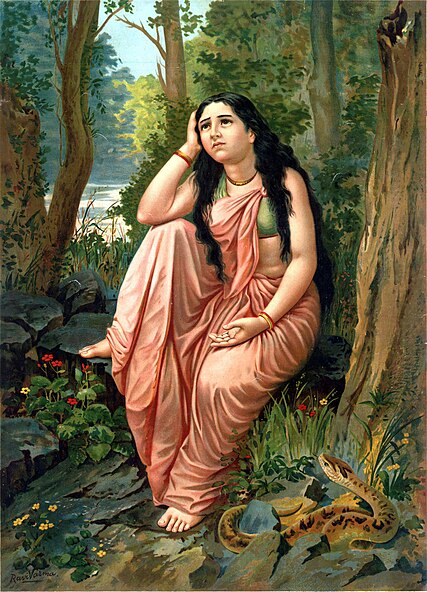 On his way away from Damayanti,  Nala saves a naga, Karkotaka  from a fire; the naga bites him and the poison transforms him to a dwarf called Bahuka. The naga also  gives him a magic incantation to get back his original form. Nala reaches Ayodhya after wandering around. He becomes a charioteer to King Rituparna.

Meanwhile Damayanti takes refuge in the palace of the Princess of  Chedi, offering to serve her. Damayanti is  discovered and taken back to her father’s house where she is reunited with her children. They search for Nala, but cannot locate him. Damayanti starts thinking that the only way Nala will come back would be for fear that she would not be his wife anymore. Thus she requests a fake second swayamvara. She is still of such great beauty that many kings attend it. Damayanti sends a riddle to King Rituparna to confirm Nala’s presence. On hearing that Damayanti might find another husband, Rituparna who had attended her first swayamvara asks Bahuka  to take him to Vidarbha. He drives the chariot  very fast to reach Vidarbha from Ayodhya in a short time. Damayanti recognizes Nala and he reverts to his original form. Rituparna also comes to know who his charioteer really was. Nala teaches his skills to Rituparna, who in turn teaches him to magically control dice.He finally overcomes the influence of Kali.  In spite of numerous hardships, Nala never leaves the path of dharma or righteousness. He gets back his kingdom by defeating Pushkara in a re-match.He is also united with Damayanti. She forgives him for having abandoned her in the forest.