Mandalas exist in many eastern religions like Hinduism, Buddhism and Jainism. A mandala resembles a circle or a geometric pattern, which is a spiritual symbol representing the universe. It symbolises the cosmos metaphysically and is considered  as the microcosm of the universe. Mandalas are of different types., though its basic form is in shape of a square with four gates containing one or more circles. The meaning is derived from the Sanskrit word meaning ‘circle’ and has now become a generic term depicting a cosmic diagram that represents and reminds us of our connection to the infinite, the microcosm to the macrocosm. A mandala is an integrated structure around a centre. Building a structure around a centre is a common theme in architecture. Mandalas depict radial balance. Mandalas are used for the purpose of meditation and  focussing attention, especially in Tantric Buddhism and Hinduism.

The mandala pattern or design is used in many cultures and religious traditions. Hindu mandalas are described in the Tantric and Agama texts. A mandala is the format on which the mantra is chanted to invoke the deity, the mandala becoming the deity itself. 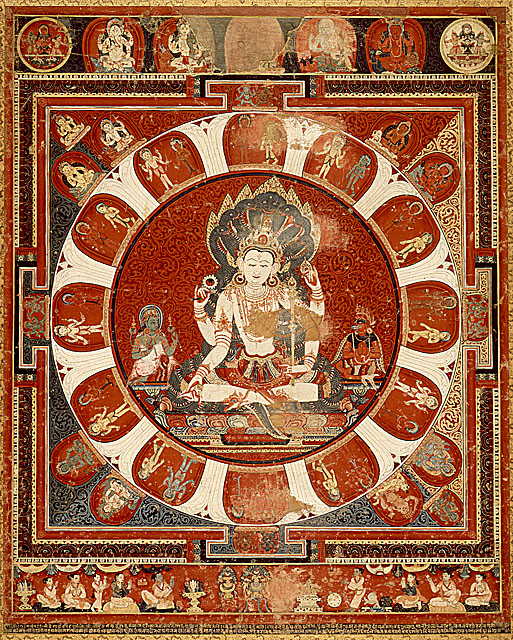 Mandala as Sriyantra, Shiva and Shakti with a coiled serpent and the ten mahavidyas, Madhubani painting, India

Buddhist Vajrayana monks create sand mandalas with the sand made from crushed semi-precious stones. After the ritual the mandala colours are all mixed and put in jars or into flowing water, to bring attention to the temporariness of life on earth. Tibetans believe a mandala has a teacher, a message, an audience, a site and a time. 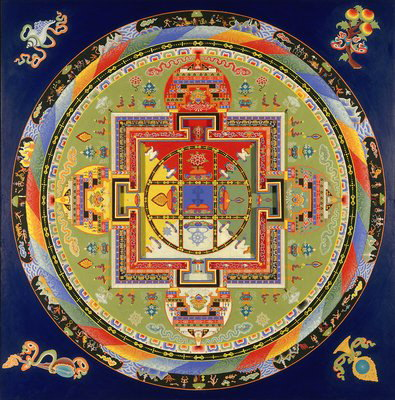 In the medicine Buddhist mandala, as per the Atlas of Tibetan medicine, Lord Buddha has been depicted as the Medicine Buddha or Menla residing at the centre of the mandala. Surrounding him are a number of gods, goddesses,rishis,protectors of medicine, healing herbs, mountains with medicinal plants, minerals and medicinal hot springs.

The Five Buddha mandala represents various aspects of enlightenment; for example; the Five wisdom Buddhas has Vairochana, Aksobhya, Ratnasambha, Amitabha and Amoghasiddi. A mandala can represent the entire universe with Mount Meru at the centre, surrounded by the oceans and continents. In mandalas the outer ring of fire depicts wisdom, the second ring has vajras representing enlightenment. Lotus petals in mandalas signify purity. 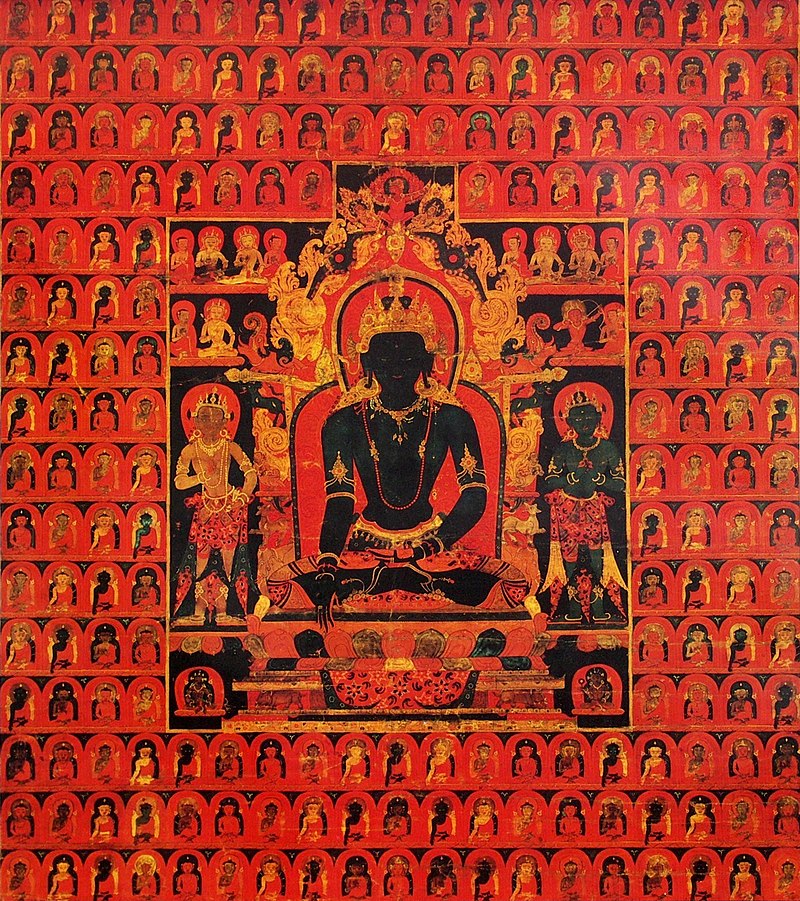 In Japan, a branch of Mahayana Buddhism, Shingon Buddhism uses the mandalas for initiating monks and other rituals using the garbadhatu or womb realm mandala and the vajradhatu or the diamond realm mandala. 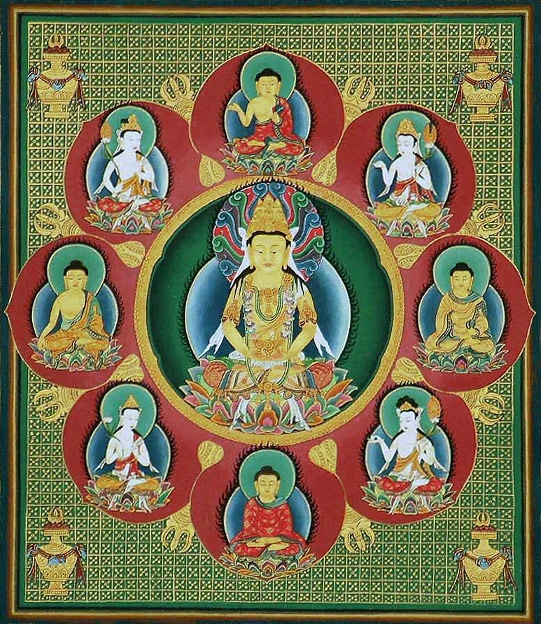 Shadakshari is the form of Avalokiteshwara ,(a bodhisattva, a compassionate being who looks down on all beings and has postponed  own buddhahood or enlightenment,also known as padmapani), of whom the Dalai Lama is an incarnation. Shadakshari Lokeshvara is believed to live in a paradise called Potolaka or Potala.

Jainsim is another important religion from the east where mandalas are used. As per Jainism, every soul is potentially divine and jinas are beings who have attained enlightenment. There were 24 jinas who were the tirthankaras, the first being Adinatha and the 24th being Lord Mahavira who lived in the 6th century; who is frequently depicted in the Jaina mandalas.

Painting of Samavasarana or assembly of a tirthankara,1800 A.D. Rajasthan.

Mandalas depict a beautiful amalgamation of religion and art. In recent times also mandalas are constantly being created by children and adults alike. They are being used for meditation and as a form of art therapy. Rangoli designs made at the entrance and courtyards during festivals in  homes across India, also resemble mandalas. 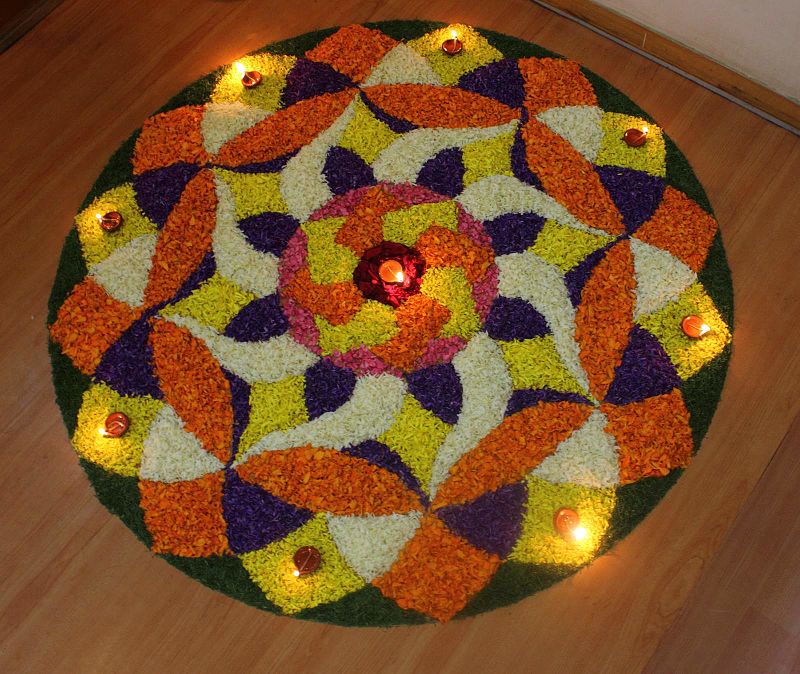