Kubera is the God of wealth as per Hindu mythology. He is the Dikpala or regent of the North and protector of the world. He is plump and adorned with jewels carrying a pot of money and a club. He is the God-king of the semi divine yakshas. He is the Lord of the rakshasas,guhyakas,kinnaras, mayurajas and nararajas.He acquired the status of a deva only in the Puranas and Hindu epics.  Kubera has been assimilated in Buddhism and Jainism. Kubera is seen with a mongoose in Buddhist depictions. He is called Saravanbhuti in Jainism and Vaisravana or Jambhala in Buddhism.

Kubera is first mentioned in the Atharvaveda and the Sthapatha Brahmana, chief of evil spirits. In Manusmriti he is lokpala, protector of the world. The Mahabharata mentions him as the son of Prajapati Pulastya and his wife Idavida. However the puranas mention him as son of Vishrava and Ilavida, daughter of Sage Bharadwaja.

Kubera is mostly seen as a dwarf having a big belly. He is believed to have three legs, one yellow eye and adorned with jewels.He is sometimes depicted riding a man.The description of deformities like the broken teeth, three legs, three heads and four arms appear only in the later Puranic texts. Kubera holds a mace, a  pomegranate or a money bag in his hand. The Vishnudharmottara-purana describes his complexion as that of the lotus leaves. He is the embodiment of artha or wealth and glory.He wears an armour and a necklace down to his large belly. He is riding a man, has a beard and moustache with his face inclined to the left.The said purana mentions two tusks to be protruding from his mouth and his wife Riddhi is seated on his lap with her right hand holding a ratnapatra or a jewel-container. The Agnipurana states that Kubera should be in temples seated on a goat, holding a club.In Jainism Kubera has a nectar pot in his hand and is depicted as a drunkard.

It is belived that Kubera once looked at Lord Shiva and Parvati with jealousy and lost one of his eyes. Parvati turned this eye yellow. He is called Bhutesha; Lord of spirits like Shiva.  Kubera usually is drawn by spirits or men ;nara, so is called Nara-vahana.

Kubera‘s city alaka is the richest of all celestial areas. the puranas say that he was in possession of Lanka but could not retain it as it had been built for the rakshasas by Viswakarma and they had deserted it out of fear of Lord Vishnu. A rakshaka Sumala sent his daughter to seduce Kubera’s father. She managed to marry him and had four sons of whom Ravana was the eldest. Ravana had obtained a boon of invincibility from Lord Shiva after severe austerities. He drove away his half-brother Kubera from Lanka and seized his car Pushpak (given to him by Lord Brahma). It is said Lord Rama gave it back to its owner, Kubera after defeating Ravana. 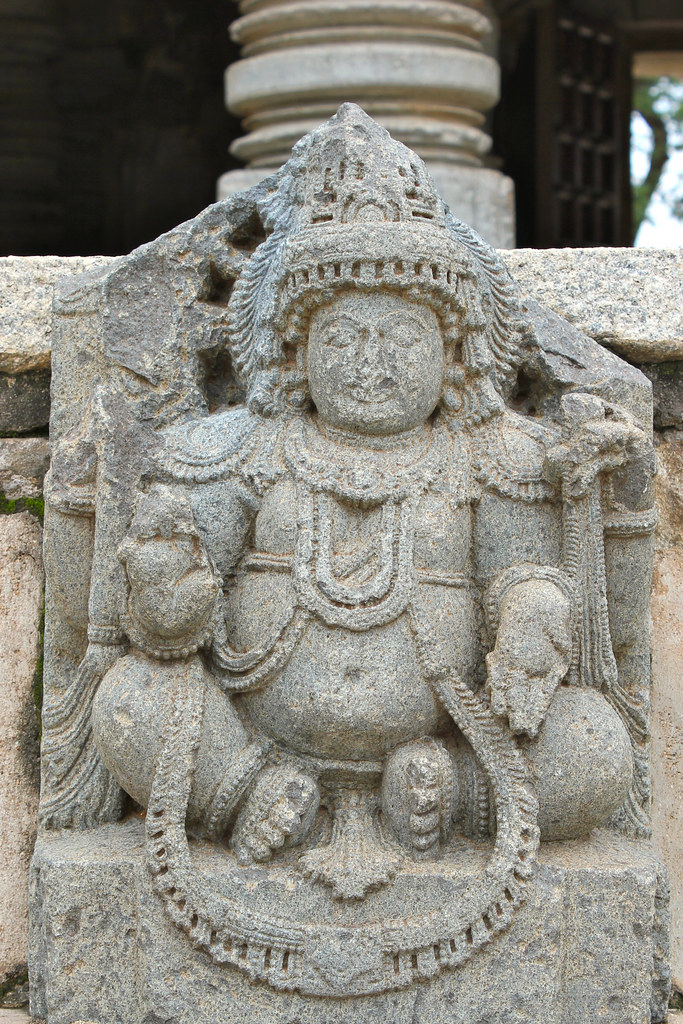