Lord Krishna is a much loved deity in Hinduism. His childhood as Balakrishna, youth as a cowherd; later revered as the mentor and charioteer of Pandava Arjuna in the Indian epic Mahabharata who advises him on the battlefield in which he has to fight his own cousins. His actions, words and feats including his Rasaleela at Brindavan with his beloved Radha and other has been captured in art, poetry and narratives. Find the story behind a celebrated feat of Lord Krishna – the Kaliyamardana in which he slays a multiple hooded serpent of astounding strength who is tormenting people and been depicted in many artworks found all over India and outside India.

The details of the story is found in the Bhagavata Purana, one of Hinduism’s 18 great Puranas.

Krishna dancing on the head of Kaliya, Mughal School, India, 1590-1595 A.D, illustration from the Harivamsa, an appendix of Razmnama, Balarama and people watch from the riverbank.

The story is very interesting and takes us to the banks of the Yamuna flowing through Brindavan in the north of India. Lord Krishna as a young lad who also lived nearby, played here along with his cowherd friends. The tenth canto of Chapter 16 describes an amazing feat of a young Krishna of subduing a serpent called Kaliya and the episode is referred to as Kaliyanaga-mardana. The depictions in art range from narrations in miniature paintings, stone sculpture, metal works and book illustrations.

Kaliya the serpent was originally from Ramanakadwipa and driven away from there because he was mighty afraid of Garuda the enemy of snakes. Garuda had been cursed by Sage Saubhari that if he ever came to Brindavan he would meet his end there. So Kaliya made Brindavan his home and lived there with his family. The giant serpent was residing in the river Yamuna and scared people away and nobody could go near to the site where he lived. He was also spilling deadly venom into the Yamuna which was frothing and bubbling over. One day Krishna and his cowherd friends were playing a game of ball. While playing the ball fell near the spot where Kaliya resided. Krishna’s friends urged him not to go after the ball. But Krishna jumped into the river and on seeing Krishna, Kaliya curled around his legs. Krishna’s mother Yashoda was very frightened of the serpent and asked Krishna to just come home. However Krishna stomped on his tail and warned Kaliya not to trouble anybody. Kaliya was a very strong serpent and pulled Krishna into the river. People gathered on the bank. Kaliya has got Krishna ensnared in its coils. However Krishna expanded himself forcing Kaliya to release him. After he was thus released, Krishna started dancing on the head of Kaliya which released the poison of the snake. Krishna took the weight of the whole universe and started beating him with his feet. Kaliya started to die and began vomiting blood. Kaliya’s wives came and begged Krishna to spare his life. Kaliya too  surrendered and promised not to harass anybody again. Krishna did a final  dance on his head and asked him to go back to Ramanakadwipa and assured him that Garuda would not trouble him again.

Kaliyadamardana, Krishna ensnared, Brooklyn Museum, U S A, painting, created between 1750 and 1780 A.D. 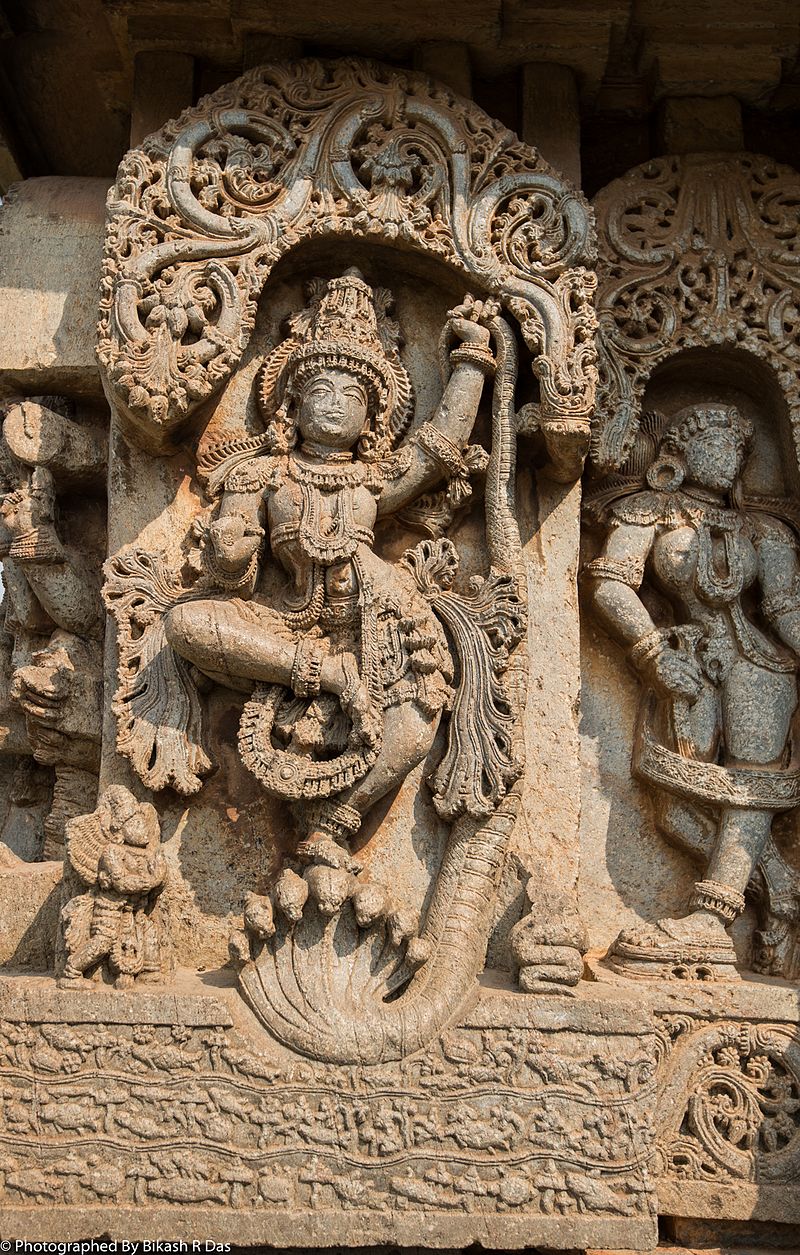 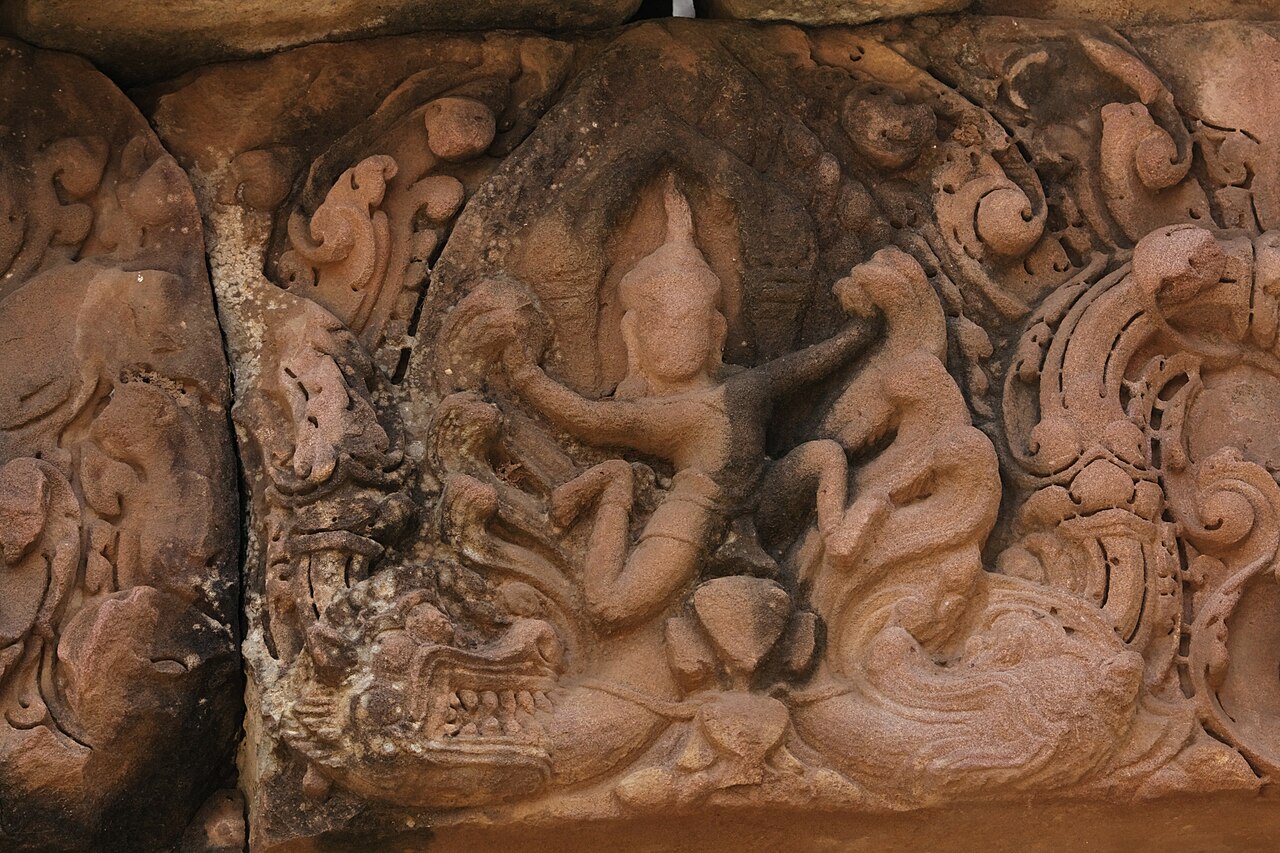 Krishna rose from the river while dancing on Kaliya’s head. People too on seeing Krishna danced on his head and Kaliya was finally pushed into Patala where  he stays to this day as it is believed. 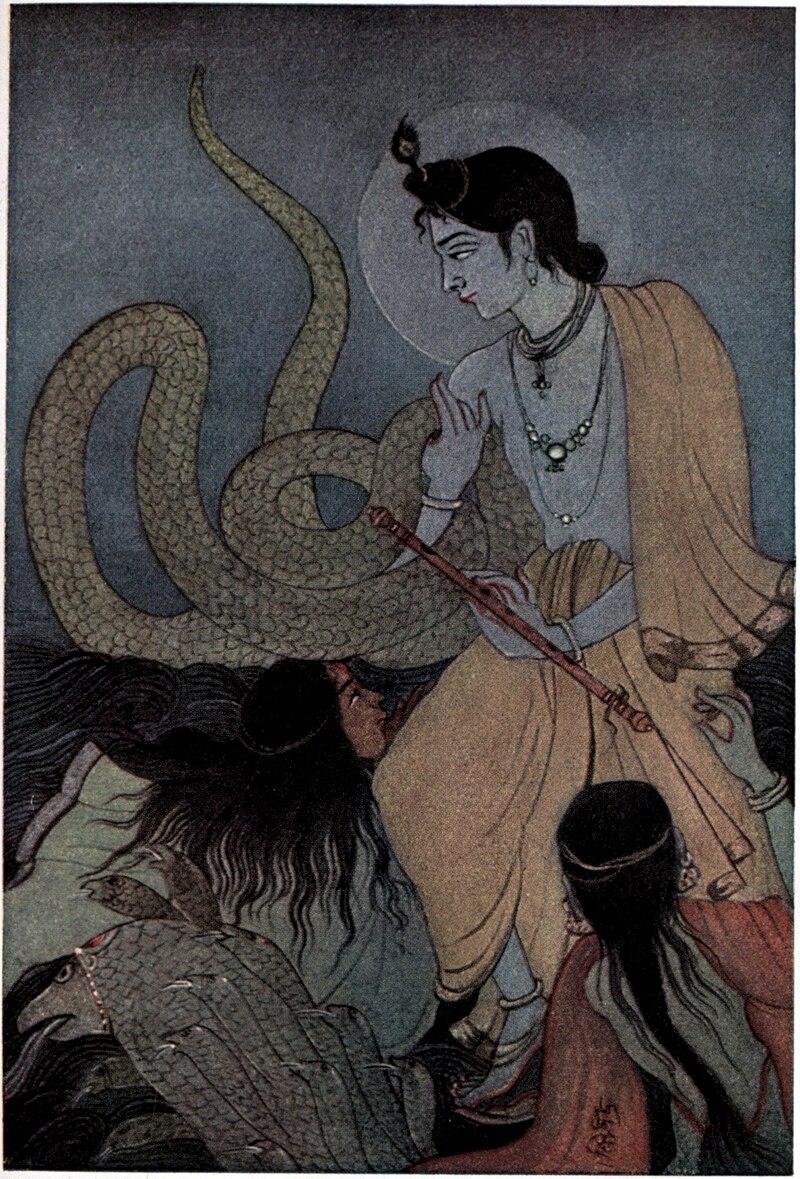 Raslila is a celebratory dance done in the form of a ras mandala by gopis along with Lord Krishna  Gopis are cowherd maidens who are smitten with Lord Krishna, Radha being the main among them.The Raslila is described in the Bhagavata-purana and Jayadeva’s Gita -Govinda. The word lila means play or act, whereas ras refers to emotion or essenceflavour/mood etc. It is difficult to find an exact synonym in the English language; raslila is a dance of  divine love.

It is believed that one night, on hearing Krishna playing on his flute, all gopis of Vrindavan left their homes and joined him in a dance in the forest or grove where they danced through the night. Lord Krishna manifested himself in multiple form and each gopi believed that he was dancing with her. A unique circle is formed in the raslila called the ras-mandala. The Bhakti tradition followers believe that the earthly romantic love  between human beings is a dilute form and the intense love for Krishna felt by the gopis is like the soul searching for the ultimate , the God divine in the spiritual realm. The gopis are believed to be shadows of Lord Krishna’s own form.

The Raslila is popular theme in many Indian dance forms like Kathak,Odissi,Manipuri and Bharatnatyam.