Elephants have played a major role in the mythology and history of India. The use of the animal has been documented via sculptures, historical researches and miniature paintings. Though it is true that horses and camels were also part of  royal entourages to draw vehicles and carry goods, the elephant was used in warfare, hunting expeditions, for executions, entertainment, in  processions, for gifts and a display of prestige. Elephants have depicted in the Ajanta murals. The scroll decorations at the base of many temples in India using the elephant motif. Many fort remains of India still have the elephant stables intact. Discover the depiction of these awesome pachyderms in Indian paintings made during the  medieval and late medieval times !

The elephant is a beloved animal in India. Many schools of painting have depicted this animal which is symbolic of mountains, clouds,heaven, rainfall and prosperity. The God Indra in Indian mythology has the elephant Airavata  as his mount. Goddess Lakshmi as Gajalakhsmi also is associated with the elephant, gaja, meaning elephant. Lord Ganesha, a favourite deity from Indian mythology, has the head of an elephant. The events from the Indian epic Mahabharata have been captured by the Kangra artists, one of the Pahari school of paintings. The battlescene at Kurukshetra is depicted and can see the elephants as part of the cavalry.

Arjuna’s son Abhimanyu of the Pandavas fights Dushashana of the Kauravas in the Mahabharata battle, Kangra painting, 1803 A.D.

However it was the artists at the Mughal atelier who celebrated the presence of the royal elephants. Persian painters trained the Hindu artists during Emperor Akbar’s reign (1556 – 1605). They captured them in action, as standalone depictions, in various stances like fighting which was a sport, with Kings on  their back and a mahout sitting on them.  The elephants had names like Khushi Khan was Emperor Akbar’s first elephant. Another elephant Dilsankar is associated with him. A elephant called Damodar was gifted to Bairam Khan. Emperor Akbar was a great lover of elephants who tamed the elephant Hawa’i  known to be temperamental. He had 101 personal elephants in his stables.  The Rajput courts like Kotah, near Bundi, were influenced by Mughal art and the rulers commissioned artworks by both Hindus and Muslims which depicted elephants. Emperor Jahangir had an elephant called Gajraj. Emperor Aurangzeb confronted Sudhakar in 1633. Bahadur Shah Zafar had an elephant Maula Baksh who fought in the war of 1857 A.D.  The Deccan courts had in their ateliers Mughal artists among others who have made remarkable paintings of the elephants of the Sultans.

Emperor Akbar on his elephant Hawa’i, chasing another Ran Bagha, across a collapsing bridge of boats, 16th century, V and A Museum, London. 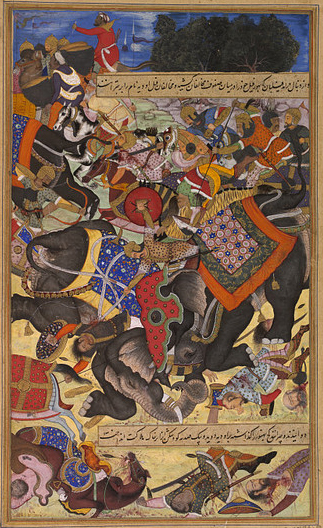 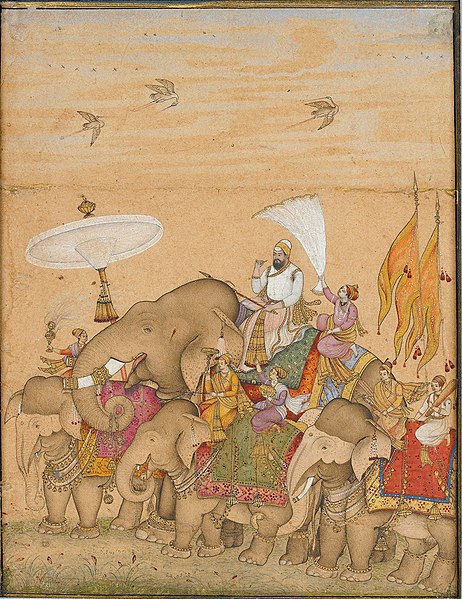 Elephants are actually massive pachyderms who show a certain grace as they move and have a unique intelligence with a charming playfulness; have been decorated with ornaments and embellished textiles over the ages. The jhul (saddle blanket) and seeri (head-dress) are commonly seen. Elephants are a part of religious and some other processions in India, even today in the 21st century. Their bodies are painted decoratively along with trappings like the jhul and tinkling bells. The use of elephants represent pomp and ceremony since yore.

The valleys and hills of the Lower Himalayas in Himachal Pradesh, India is beautiful and inspiring. Nature’s beauty echoes here in greenery and cool scenery. The Pahari school of Indian painting flourished here during the 18th and 19th centuries. Of the different schools, the Kangra style is very famous and well known. The erstwhile Kangra princely state is majorly responsible for the development and flowering of the style. Sometimes Pahari school is used synonymously with the Kangra style though there are many variations ! Kangra painting has its  This style uses a lot of green and other refreshing colours.  The painters used colours from minerals and vegetal sources. The distinctive feature of this school is its emphasis on naturalistic images, greenery, flora and fauna.  The paintings are full of the shringara rasa (beauty and eroticism),the sense of lyricism is very evident in the paintings and soothes the eye and heart of the viewer. The love between Lord Krishna and Radha as described in Gita-Govinda, episodes from Lord Krishna’s life : Bhagavata Purana, the Nala Damayanti story, Barahmasa of Keshav Das have been the themes. The Sat Sai of Bihari Lal depicted Radha-Krishna in an architectural setting. Nayak-nayika bheda is also a theme of these paintings. One can recognise  a Kangra painting by some unique characteristics. Excellent greenery in different shades and vegetal forms like trees, creepers are all seen. There is an amazing attention paid to detail. Women are depicted as soft and beautiful, with sharp beautiful facial features. Night scenes with thunder and lightning are also found. The paintings have a sense of serenity found among the hilly valleys and greenery. Naturalism is at its peak in Kangra paintings.

The origin of Kangra painting happened in the state of  Guler in the Himalayan valley during 18th century under Raja Dalip Singh who ruled 1695 to 1741 A.D. He gave shelter to Kashmiri artists at his court who were trained in Mughal style. The style was immortalised by the works of the sons of Pandit Seu, the celebrated Nainsukh( 1710-1778) and his older brother Manuku. who worked actively 1725 to 1760 at Guler. The style evolved to include Mughal elements and new local idioms. The early Kangra paintings were mostly portraits made during the reign of Ghamand Chand( ruled 1761-1774 A.D) made mostly by Gaudhu, son of Nainsukh.

Kangra painting grew under Maharaja Sansar Chand (1775 to 1823). He occupied the Kangra Fort in 1786 and was a powerful king. Being an ardent devote of Lord Krishna, he patronised the artists who painted Radha-Krishna and the portraits of their masters. The Kangra style originated at Guler but later evolved its own freshness and character by depicting Shiva-Parvati, Radha-Krishna among other themes. Nainsukh’s sons were part of the atelier of Sansar Chand; Kama,Gaundhu,Nikka and Ranjha. They worked at Guler, Basohli, Chamba among others. Maharaja Sansar Chand annexed part of Chamba teritory in 1794 by defeating Raja Raj Singh. He defeated the Rajas of Sirmur, Mandi and Suket; the Raja of Guler, Prakash Chand became his vassal. In course of time however the enemies of Sansar Chand instigated the Gorkhas to attack Kangra who laid siege to the fort in 1805. The artists abandoned Kangra and his atelier was disturbed forever. He could not retain his fort and territories and had to shift to Tira-Sujanpur where he tried to revive the art. and some artworks were created. However the previous energy seemed to have got diluted and Sansar Chand  became a legend and patron of one of India’s iconic art forms. Kangra had been under the Mughals till 1786 and under the Sikhs from 1810-1846. At Nurpur, paintings were mostly done during the rule of Prithvi Singh (1735-89) and Bir Singh (1785-1846). Thus the principal centre of Pahari (of the hiils) painting was the Kangra valley; under the patronage of the rulers of Guler, Kangra and Kings of Nurpur. Later the artists migrated to Mandi, Suket, Kulu, Tehri Garhwal, Basohli and Chamba and Bilaspur.

A scene as described in the Gita Govinda by Jayadeva:

Another scene as described in the Gita Govinda by Jayadeva:

The sky is thick with clouds; the forest area is dark with the tamala trees; the night frightens him (Krishna); Oh Radha! you take him home; This is the command from Nanda.  But, Radha and Madhava stray to the tree on the banks of river Yamuna, and their secret love sport prevails.

Marriage of Parvati and Shiva, painting, first half of 19th century.

Rama, Sita, and Lakshmana at the hermitage of Bharadvaja,page from a dispersed Ramayana, 1780. 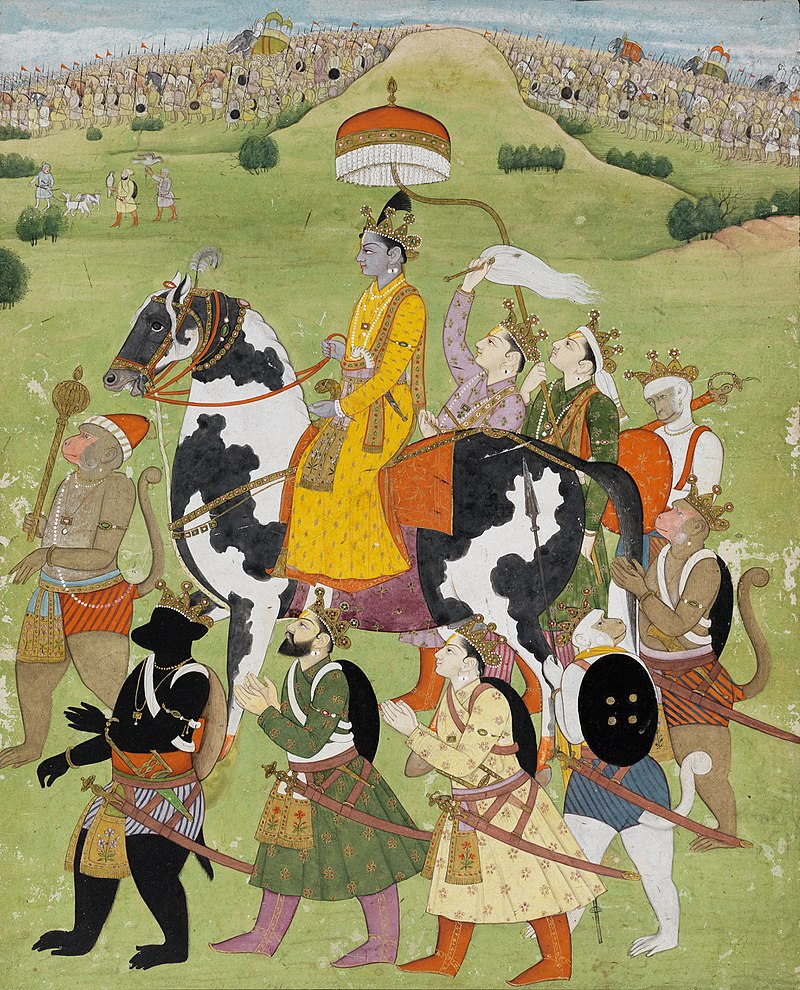 Damayanti looks in the mirror, folio from a Nala-Damayanti, Kangra, circa 1790 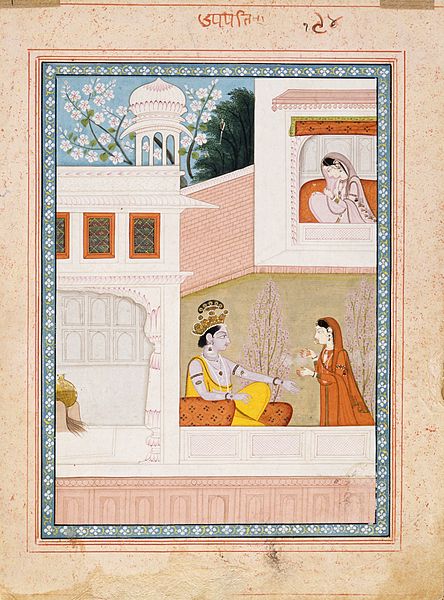 Lord  Krishna talks to Radha’s maid, folio from a Sat-sai  of Bihari Lal, Kangra, circa 1825.