Rati, daughter of Prajapati Daksha is the Hindu goddess of love and sexual desire. She is an embodiment of beauty and is the consort of Kamadeva and is also his assistant. Rati is not only beautiful but sensual enough to mesmerise the God Kama.

There are many legends associated with Rati. She has been depicted along with Kama in temple sculptures. Her birth has been mentioned in Kalika purana.  Kamadeva has been created by Lord Brahma, one of the Gods of the Hindu trinity, through his mind, after he created the 10 prajapatis. Daksha is a prajapati. Lord Brahma asks Kama to shoot love arrows in the world and Daksha is to present the wife to Kama. However Kama fires his arrows to the other prajapatis who get attracted  to Sandhya, daughter of Lord Brahma. Lord Shiva sees them as he is passing through. They feel  embarassed  and  from Daksha’s sweat rises a beautiful maiden called Rati whom he presents to Kama as his wife. However Kama requests for forgiveness  and Lord Brahma relents telling that he will be resurrected.  As per the Brahma Vaivarta purana , Sandhya commits suicide and Lord Vishnu resurrects her marries her to Kama calling her Rati. But the Shiva purana says that Rati is born after the suicide of Sandhya as Rati from the sweat of Daksha. 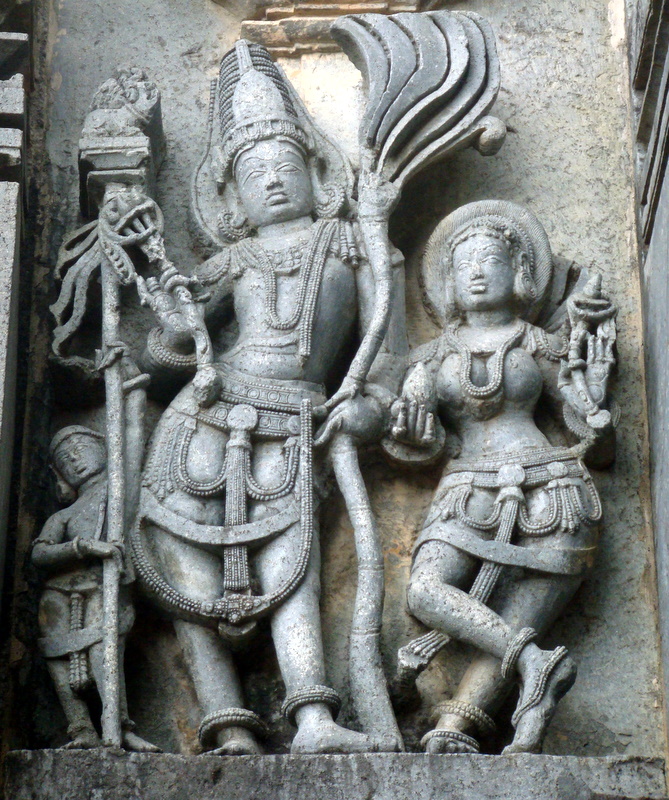 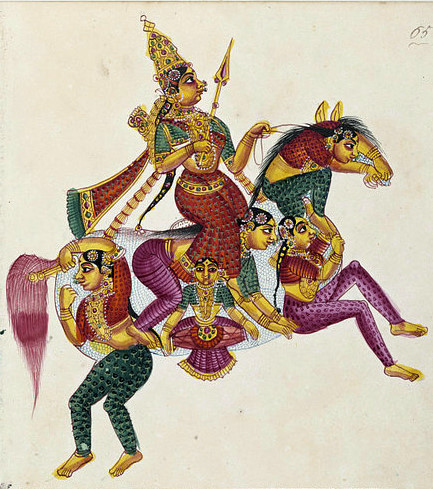 As per legend Tarakasura had created havoc in the universe and only Lord Shiva’s son can stop him. However Lord Shiva has turned ascetic after the death of his consort, Sati. In order to infuse love into him again Kama is asked by the Gods to shoot love arrows at him. Lord Shiva gets attracted to Parvati (Sati reborn) but burns Kama to ashes. At this Rati goes berserk. In the Puranas the legend continues that Parvati promises to redeem Kama as Pradyumna, Lord Krishna’s son after seeing Rati’s penance.

Another legend in Skanda-purana says Sage narada provoked the demon Sambara to kidnap Rati. Rati would have insulted Sage Narada at one point. Sambara takes Rato to his house but cannot touch her as he might burn to ashes. Rati becomes a kitchen-maid and she is called Mayavati. Another legend has it that Sambara will die at the hands of Kama and so she waits for him to come. Sambara knows about this, steals Lord Krishna’s and Rukmini’s child and throws him into the ocean. A fish swallows him and the fish lands in Mayavati’s kitchen. Mayavati raises the child; sage Narada conveys that he is Kama reborn and that she is actually Rati. As the child grows the motherly love changes to passinate love of a wife. Mayavati narrates the entire story and trains Pradyumna who slays Sambara and they return to as a couple to Dwarka, capital of Lord Krishna.

As per Hindu Tantra , the Goddess Chinnamasta, one of the mahavidyas  is depicted cutting off her own head and standing on the couple Kama and Rati who are locked in a sexual embrace. This entire depiction is understood in different ways. It can be understood as asymbol of control of sexual desire or that the Goddess is asymbol of sexual energy.