Indra is a Vedic deity in Hinduism ,a guardian deity in Buddhism and also the king of the first heaven in Jainsim. He has been represented in sculpture and paintings. In Hindu mythology too he is the Lord of swarga or heaven. He has been highly mentioned in the Rigveda. Indra is the destroyer of Vritra who is against human happiness. Indra is not mentioned much in post-Vedic literature as he is known to disturb monks and sages who meditate because he thinks they will develop powers more than him.

In Buddhism he is referred to as Shakra as someone paying homage to Buddha.He rules over the realm of devas with the samsara doctrine of Buddhism.In Jainism he is the king of Gods and a part of Jain rebirth cosmology. He is seen with his wife Indrani to celbrate auspicious moments with Jain tirthankaras.

Indra wields the thunderbolt known as Vajra, riding on his white elephant Airavata. The rainbow too is considered the visible symbol of his mighty bow. In Buddhism Airavata has three heads, an in Jainsim he is shown with five heads. His heaven is called Amaravati and pious mortals go there to be reborn again on earth. 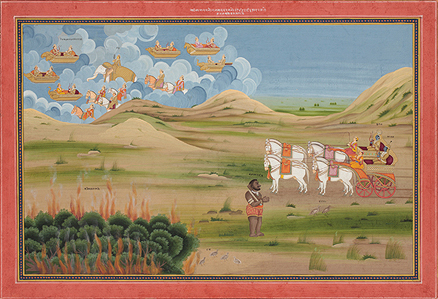 This beautiful Jaipur painting above  portrays the grand finale in the fierce battle between Indra the God of heaven and Lord Krishna who was aided by Arjuna. Agni, the god of fire wanted to eat the Khandava forest. But Indra, the God of heaven stopped the process with torrential rain to protect a friend of his. Thus the battle between fire and rain continued. A tired Agni finally approached Krishna and Arjuna for help. A battle ensued between Indra and his supporters on one side and Krishna and Arjuna on the other. In this scene one can see a blue sky with thundering clouds. Indra is seated on Airavata with his allies seated on horses. All of them are seen making a humble retreat. They are surrounded by celestial beings seated in their respective chariots. Manama Daitya, a bare-bodied demon in a short tight lower vestment, stands with folded hands before Krishna and Arjuna. The vast, undulating landscape and the forest on fire add to the beauty.  The chariots also have very fine motifs. The main figures have been identified with inscriptions. On careful observation one can even see the pearl settings on the headgears of the charioteers, peacock feathers adorning Krishna’s crown and hair on the body of the demon, Manama Daitya. This Jaipur painting is one based on themes from the epic, Mahabharata.

The Harivamsa , was a continuation of epic, Mahabharata. The Mughal emperor Akbar ordered it to be translated into Persian so that it could be read by non-Hindus. In this illustration to the text done in about 1590, Krishna sweeps down on the bird Garuda to triumph over Indra,  riding on his white elephant Airavata, watched by gods and other celestial beings. The swirling fabrics, billowing clouds, and the boat in the lower part of the scene, are all the result of the influence on Mughal court artists of European style  of painting. The original manuscript was dispersed and some pages were remounted for later albums, as here. The borders were probably added in Lucknow in the 18th century. 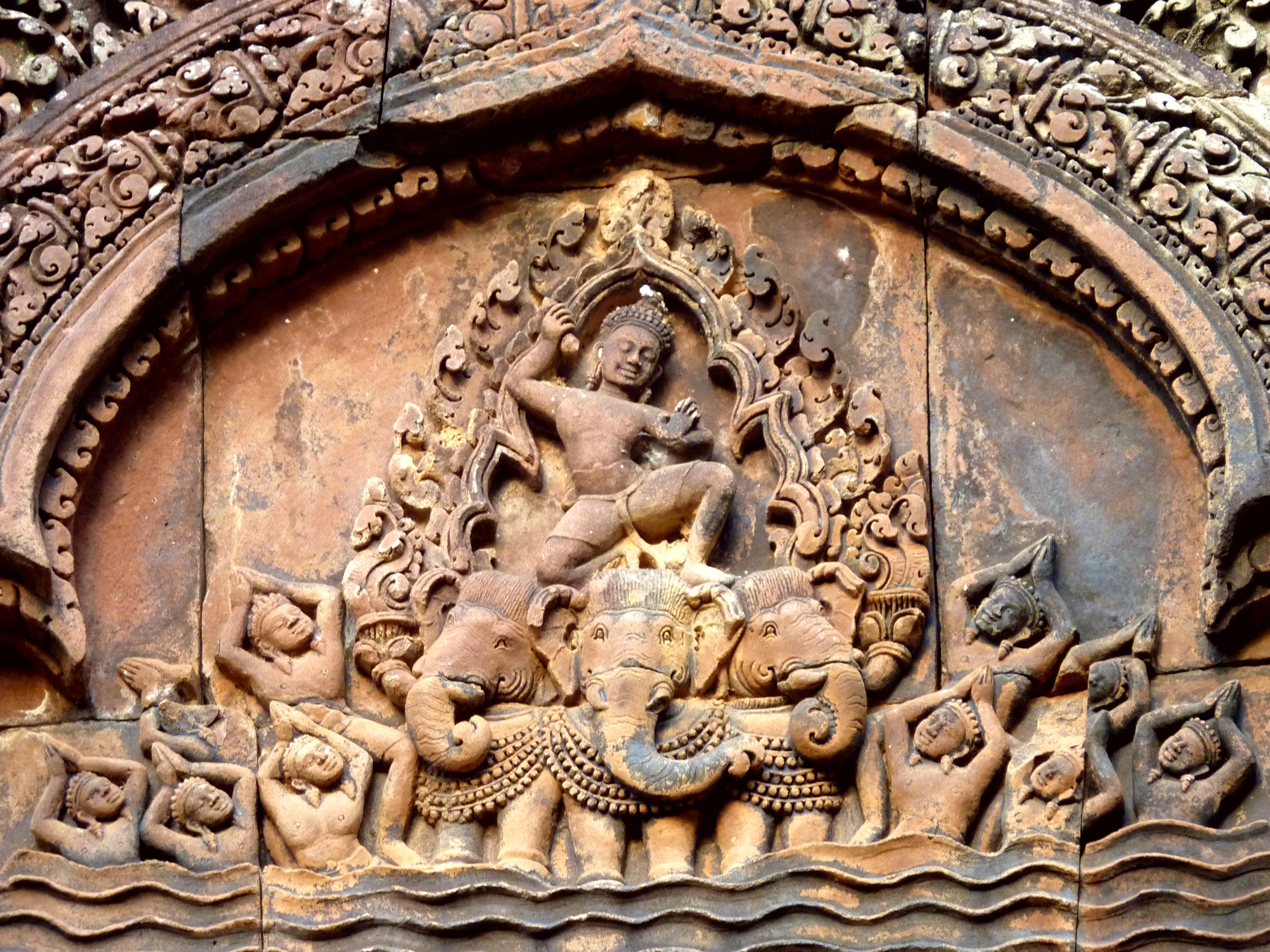 By Anandajoti (Own work) [CC BY-SA 3.0 (http://creativecommons.org/licenses/by-sa/3.0)%5D, via Wikimedia Commons 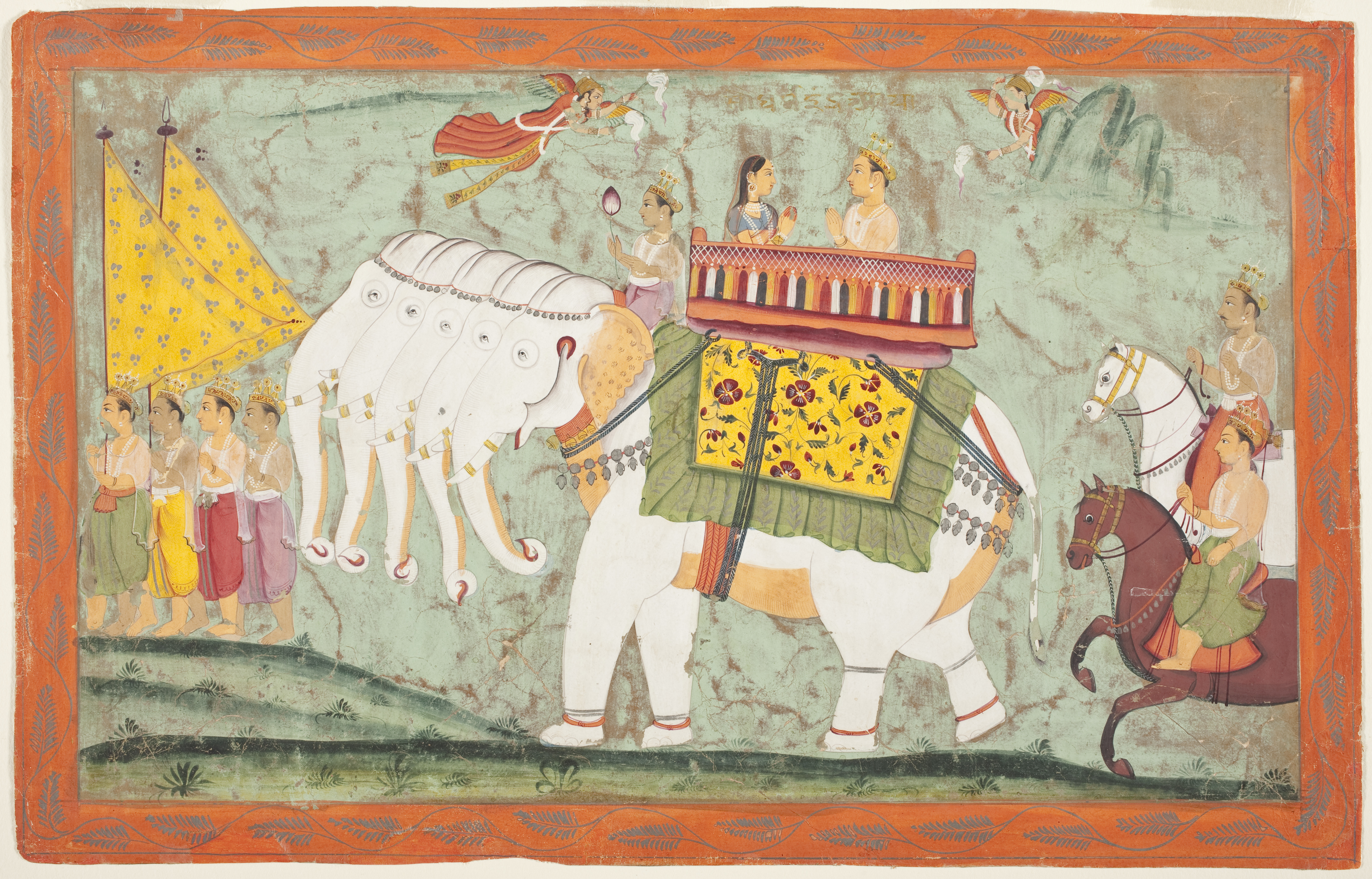 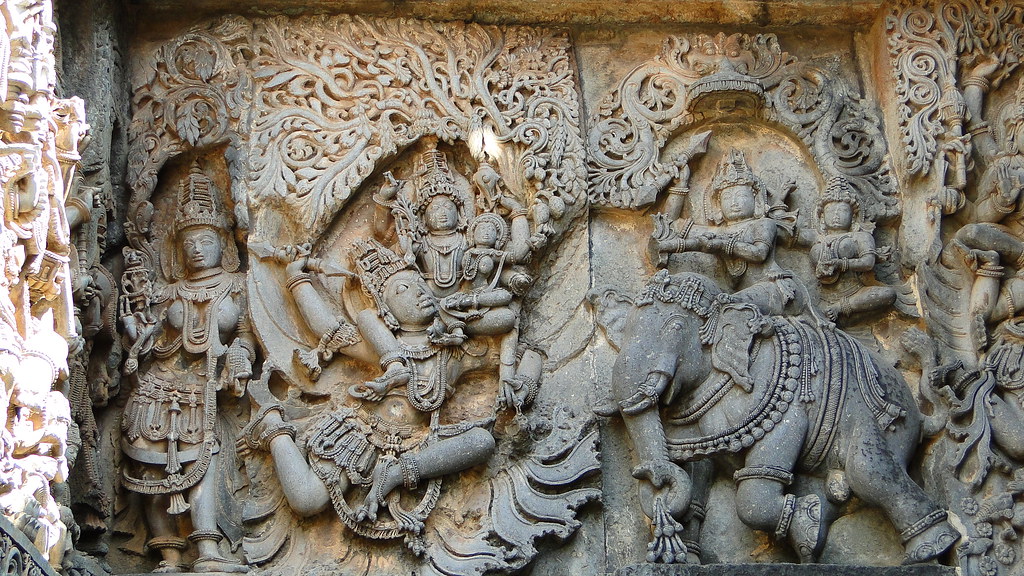