Gandharvas are the musicians of Lord Indra’s heaven as per Hindu mythology. They are male nature spirits, partners of the apsaras.  They could be part animal, usually a bird or horse. They act as messengers between Gods and humans. Gandharvas are mentioned in the Mahabharata as singers and musicians to the devas (Gods) and as warriors with the yakshas. They are given different parentage like Brahma, Sage Kashyap, Arishta etc. 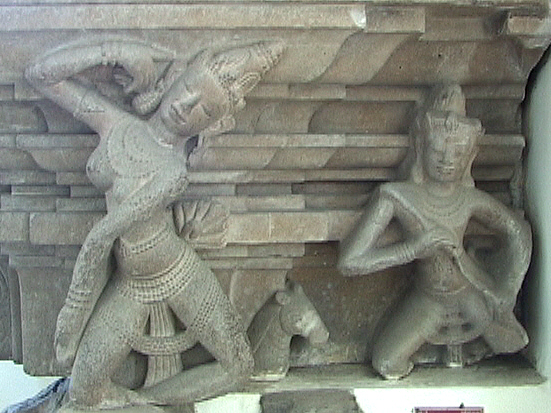 By DoktorMax at en.wikipedia [Public domain], via Wikimedia Commons

Tumbaru is the best among the Gandharvas or celestial musicians. He is the son of Sage Kashyap and his wife Pradha. As per the Bhagavata-purana Sage Narada is his teacher.He sings the glories of Lord Vishnu along with him.He performs in the courts of Kubera and Indra and leads the gandharvas in their singing. In the image below one can see him as  horse-headed and wearing  a magnificent angavastram decorated with  floral design. He is seen with acrown, with two arms and holding a veena. Gandharva Tumbaru appears many times in the Mahabharata.