Ganapati is a revered deity and is worshipped by millions of Hindus across India. Known as remover of obstacles, Ganapati is offered puja at the beginning of any venture by Hindus.He is also called Ganesha, Ganaraya, Vinayaka,Vigneshwara among many other names.He is the God of intellect and wisdom. He became prominent as a deity in the 4th and 5th century. The scriptures dedicated to Ganapati are the Ganesha-purana, Mudgala-purana, Ganapati atharvashirsha, Brahmandapurana etc.

Ganapati is the son of Lord Shiva and Parvati. His vehicle is the rat or mushaka. He is the Lord of the ganas; semi-divine beings who are a part of Lord Shiva’s retinue.

Ganesha is the only deity with a elephant’s head.  Worshipped before every new beginning and placed along with Goddess Lakhsmi in shops and other establishments; Ganapati is also addressed before embarking on a journey. Many stories exist regarding the birth of Ganapati. According to the Matsya Purana, Lord Shiva used to arrive during the bathing time of his consort Parvati, which used to annoy her. In order to stop this she is believed to have taken the oils and other ointments along with the impurities from her body she formed it into a live boy-figure by sprinkling some water from the Ganges. She kept him to be her door keeper while she was bathing. Lord Shiva arrived and wanted entry. However he was denied the same and a quarrel ensued. He got angry and cut of the boy’s head. Parvati came out and was very upset. Lord Shiva asked his attendants to get the first head that they could find to bring back the boy to life. The first head happened to be an elephant’s which was fixed on the boy’s trunk and he came back to life. This appeased Parvati and her son became Ganesha or Ganapati, the elephant headed God.

There is another mythological story regarding the birth of Ganesha. Goddess Parvati is believed to have worshipped Lord Vishnu for a son. Lord Vishnu himself came to her as a boy-child. All the Gods came to congratulate her and fixed their gaze on the child. Only God Shani did not look at the boy as he was cursed that anything he fixed his gaze upon would perish. However Parvati insisted and the moment Shani gazed upon the child, the child’s head flew off to Vaikunta. Parvati cursed Shani and was inconsolable. Lord Vishnu went in search of a head and came back with an elephant’s head. Parvati fixed it on the trunk of the child and Lord Brahma infused him with life.

Another story as per the Varaha Purana, Lord Shiva himself produced Ganesha, on request of holy sages to produce a being to combat obstacles. From Lord Shiva’s countenance emerged a beautiful youth. Parvati got jealous of him and cursed him saying he will have a elephant’s head and a protruding belly. Lord Shiva blessed him saying he will be the leader of the ganas and everybody will worship him first on all occasions. 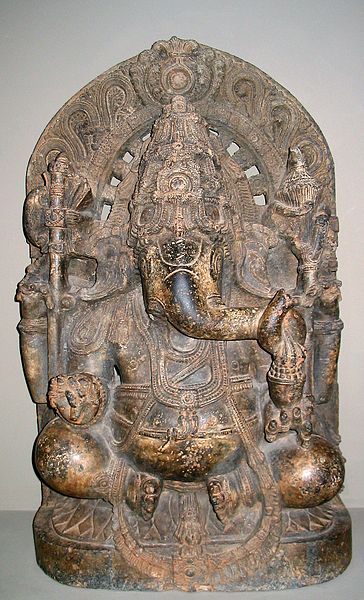 By Varshabhargavi (Own work) [CC BY-SA 3.0 (http://creativecommons.org/licenses/by-sa/3.0)%5D, via Wikimedia Commons

As per mythology, Parasurama came to visit Lord Shiva in Mount Kailash and was in a hurry. Ganesha did not allow him entry as Lord Shiva was sleeping. In the altercation , Parasurama cut off one of Ganesha’s tusks. Parvati came to curse Parasurama, but was stopped by Lord Brahma who assured her that her son would be worshipped by all Gods. 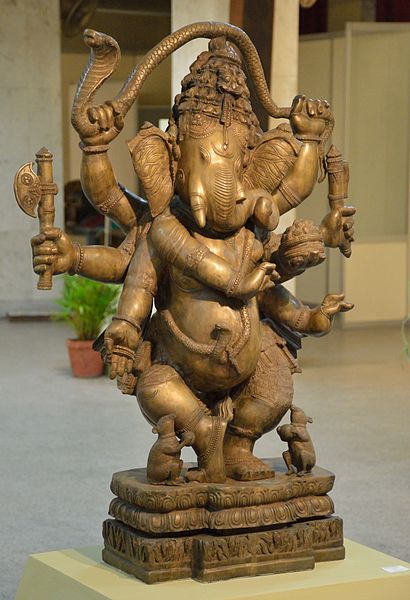 By Haa900 (Own work) [Public domain], via Wikimedia Commons 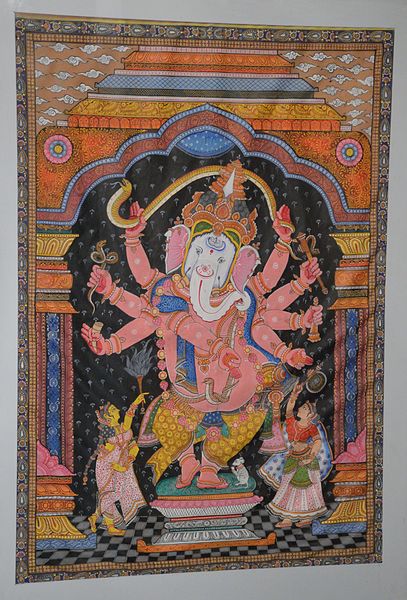 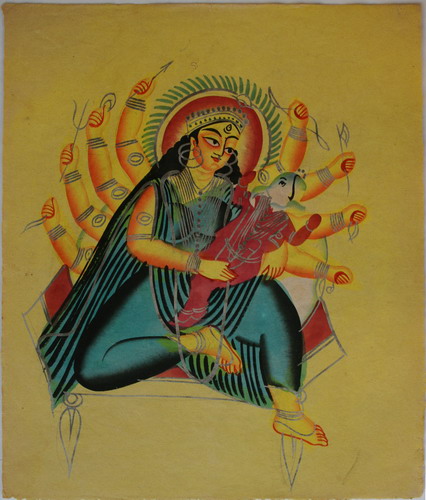 Ganesha is believed to be the scribe of the epic Mahabharata. Sage Vedavyasa dictated the same to him which he wrote down.

Ganesha’s consorts Siddhi And Buddhi came to him by a competition with his brother Kartikeya. Both were asked to circle the entire world in order to win the maidens’hand. While Kartikeya went off on his peacock, Ganesha simply quoted from sacred literature relating to geography that he had already done the tour.

Lord Ganapati’s iconic representations are many. He is shown standing, seated, crawling, dancing or on his mother’s lap. Also he is seen with two to sixteen arms in different representations. 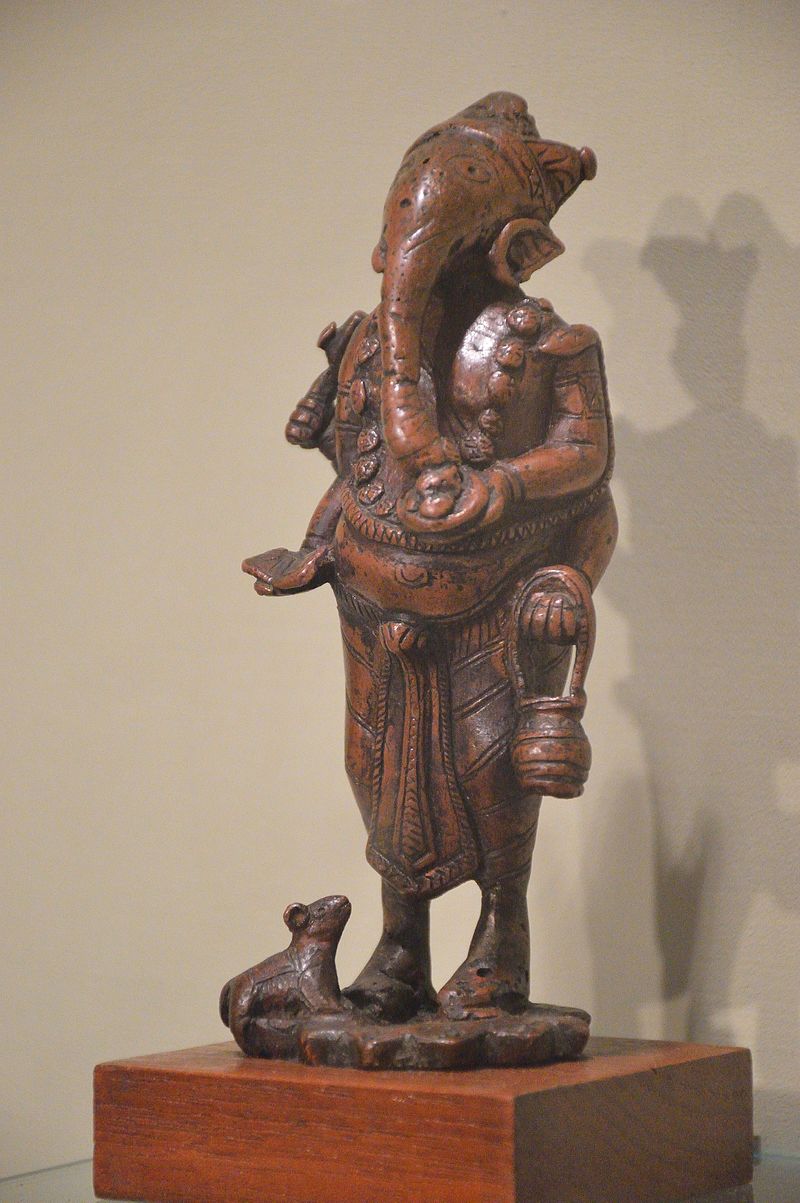 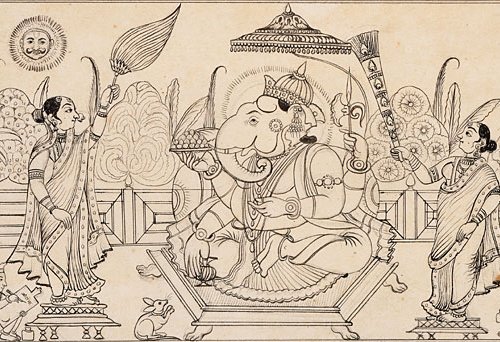 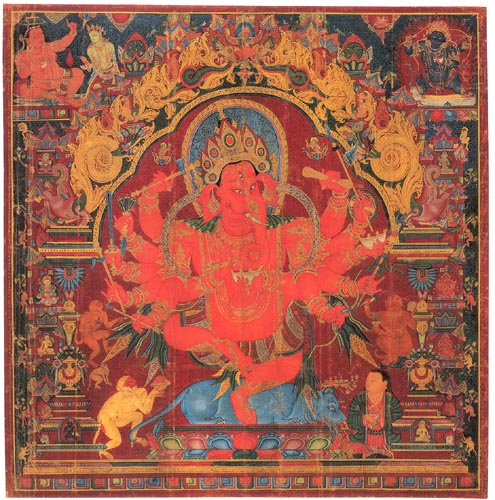 By Redtigerxyz at en.wikipedia (Transferred from en.wikipedia) [Public domain], from Wikimedia Commons 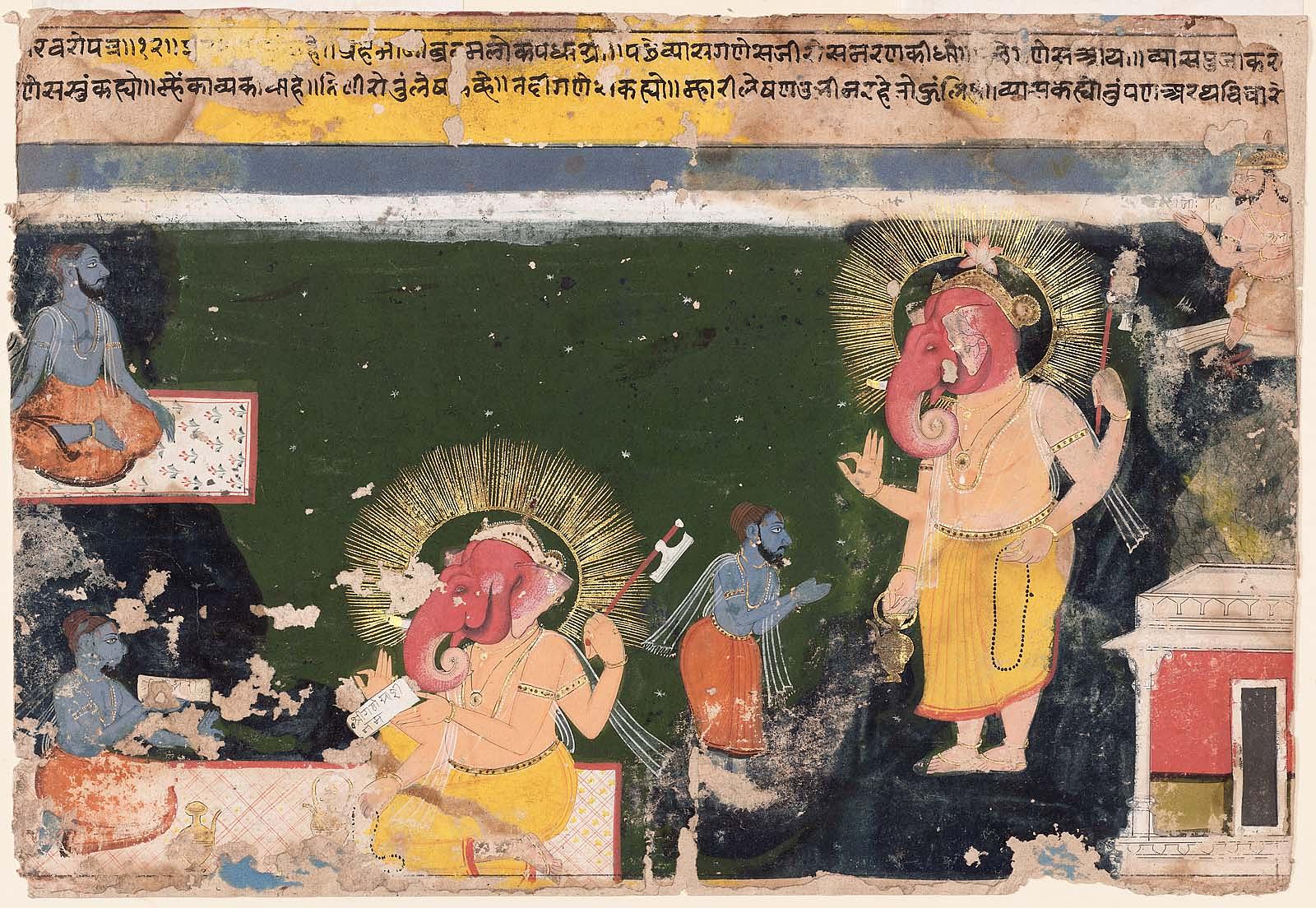 Rajasthani manuscript of Mahabharata, 17th century, Ganesha with Vedavyasa as scribe of the epic. 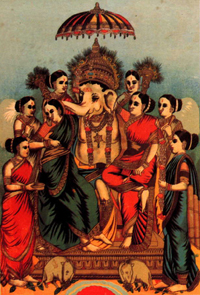