The music of India is highly developed and a sophisticated product of an ancient culture. Lord Shiva’s mystic dance symbolises the rhythmic motion in the universe. Music is sound in rhythm. Goddess Saraswati is represented as the goddess of art and learning and is seen sitting on a white lotus with a veena in one hand and playing it with another, a book in the third hand and a necklace of pearls in the fourth hand. Sage Bharata is believed to have taught the arts to apsaras, the heavenly dancers. Narada muni who wanders both on earth and heaven playing his veena taught the art to men. In Indra’s heaven, Gandharvas are the singers , apsaras are the dancers, and the centaur-like beings the Kinnaras play musical instruments. Gandharva veda means the art of music.

A very wide variety of musical instruments were used in Vedic times, both percussion and stringed. The ordinary drum was the dundhubi. Adambara, bhumi dundhubi were others. Aghati was a cymbal which accompanied dancing. The kandaveena was a kind of lute, karkari, another kind of lute, vana , a lute of 100 strings and the veena. The veena is suitable to all types of Indian music. Indian stringed instruments include the veena, an instrument which consists of a large bowl, hollowed out of one piece of wood. The flat top of this bowl is one foot in diameter. A bridge is placed on the bowl and near it are anumber of small sound holes. The veena is played using finger nails or using a plectrum. Sitar, dilruba,esraj,ektara are other stringed instruments. Sarangi, surbahar are also stringed instruments. Kinnari is a primitive Indian instrument supposed to have been invented by Kinnara , one of the musicians in Indra’s heaven. It has representation in sculpture and paintings. It has 2-3 strings, sound is not very strong.

Sculptures of many musical instruments exist on old cave temples and Buddhist stupas.  Amaravati  and Sanchi depict many such sculptures.  Music and dance have been depicted in the terracotta sculptures in the late medieval temples of Bengal as well. Showcased below are two temples; the Madan-mohana temple  at Bishnupur and the Hangseswari  temple complex at Hooghly, both in West Bengal.

The Madana-mohana temple built by Maharaja Durjana Singh Deva is a ekratna, having a single spire on a plinth with a portico in the centre. It is dedicated to Lord Krishna as the name suggests. There are two magnificent pillars at the entrance with ornate terracotta sculptures. The pillars  depict scenes from the Ramayana and scenes from Lord Krishna’s life from his cowherd days. One can find musician and dancer depictions here. The dancers are in different poses and the musicians are seen playing instruments.  Floral designs are seen between the human sculptures as rows adding a sense of  balance.The scenes are full of vitality, joy and convey a celebration of life ! 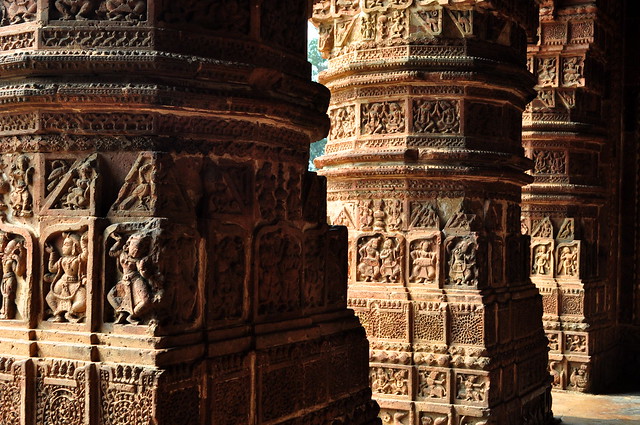 The Hangseswari temple at Hooghly has a very interesting history and architecture. The area of Bansberia next to the River Ganges, in Hooghly district was gifted to a zamindar Rameshwar Ray by Mughal Emperor Aurangzeb along with the title of  Raja in 1673. He settled down there along with his family. His kin continued to stay there.  The area came to be known as  the Royal Estate. The temple  was started to be built by Raja Nrisinhadeb Ray from late 18th century  and completed by his wife Rani Shankari  in 1814 and dedicated to a form of Goddess Kali, Hangseswari.  The deities of both Shiva and Shakti are present. The temple has thirteen spires and five stories which represent the ida, pingala, Bajraksha, Sushumna and chitrini of the human body parts according to Tantric texts. The king had studied the system of kundalini during his stay at Varanasi and decided to build a temple according to the concept. Marble was brought from Chunar near Varanasi for use in the temple. The spires represent blooming lotus buds; a metallic idol of the  Sun-God is inscribed on the top of the central spire. The inner structure of the building follow the design of the human anatomy.  The temple complex also has the Ananta-Basudeba temple and the Swanbhaba Kali temple, built by Raja Nrisinhadeb Ray in 1788. Both are terracotta temples and have exquisite sculptures on them. 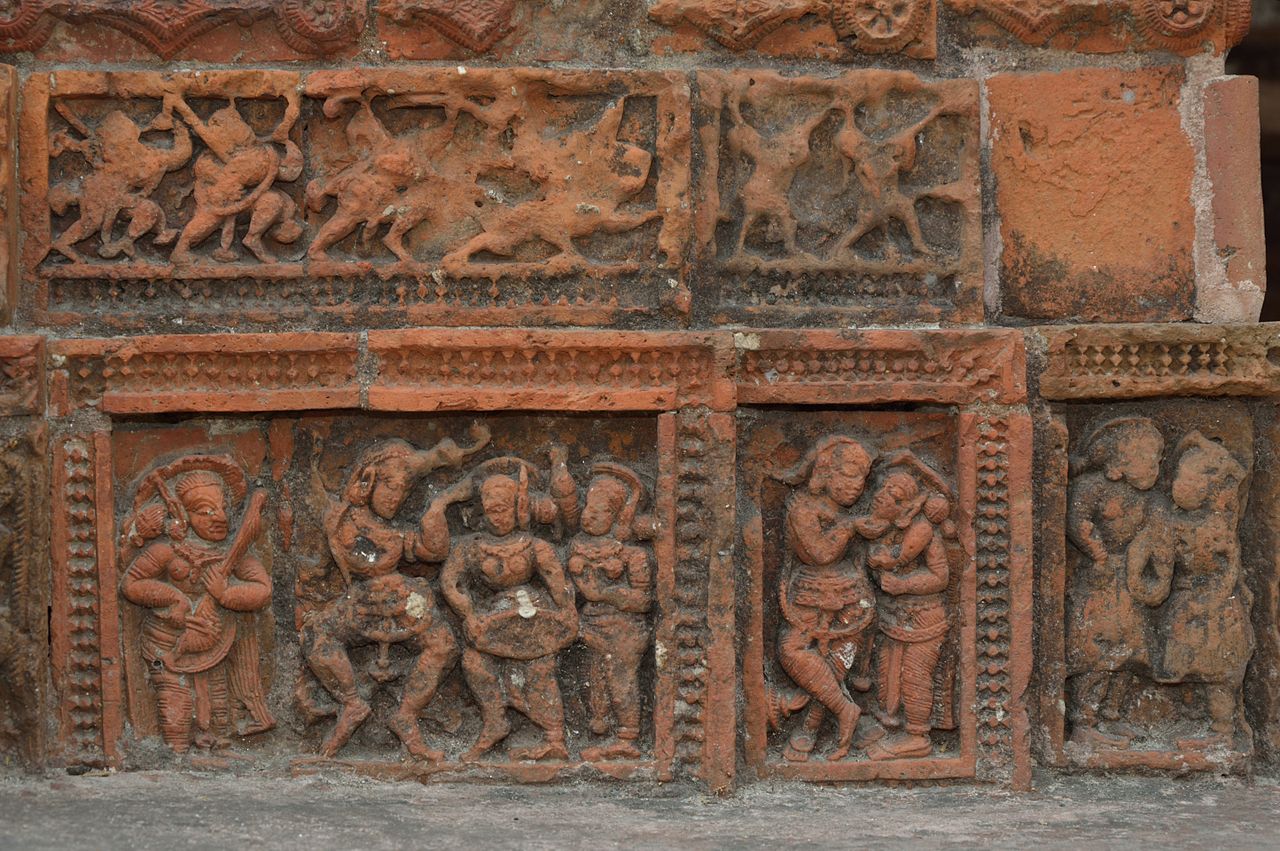 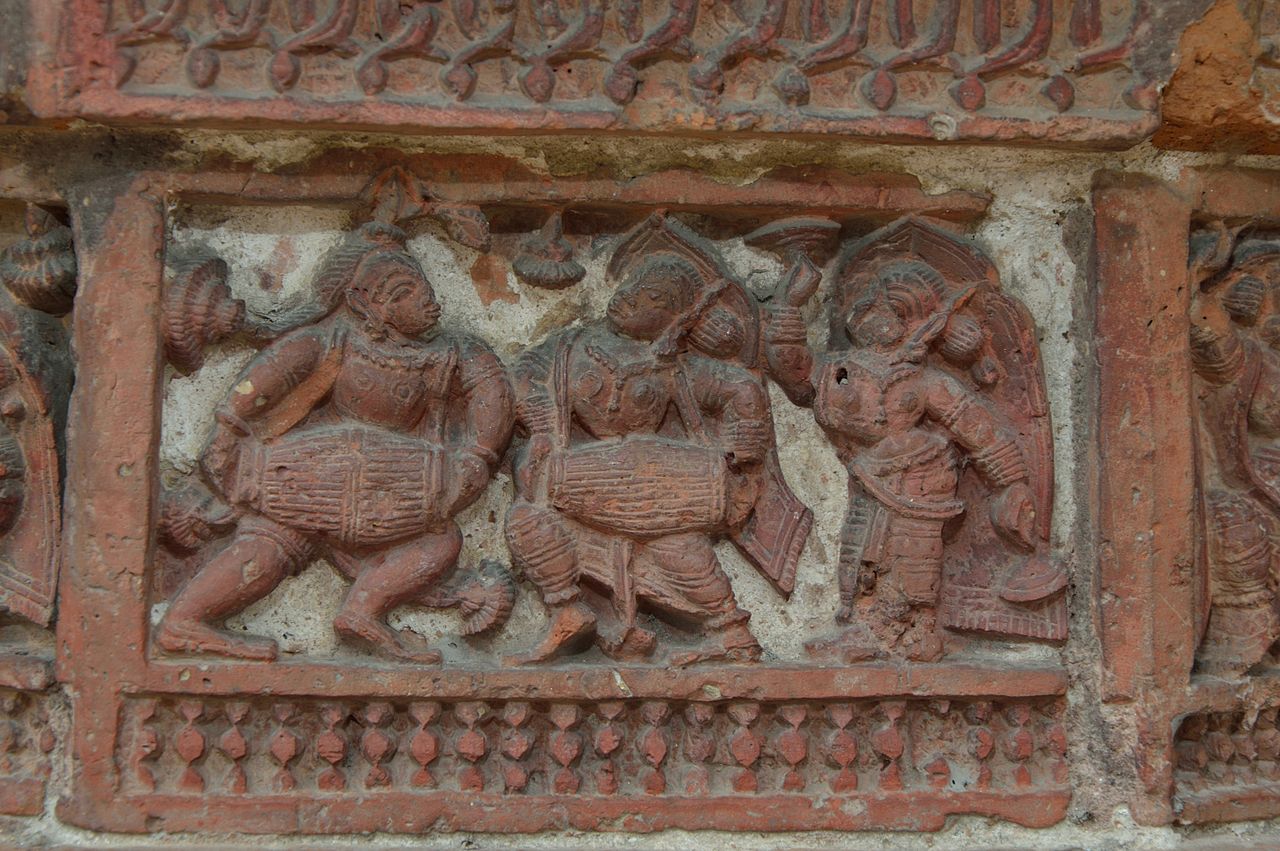