Deep cut or excavated caves in the Aurangabad district of Maharastra in Western India are the now well-known Ajanta Caves. Made into a 75 metre wall of rock, between 2nd century B. C and 5th century A.D these caves are a marvel in art, sculpture and rock-cut architecture. The earliest caves are believed to have been excavated during the Satavahana period and belong to the Hinayana tradition of Buddhism. During the reign of King Harisena (r. 460-478 A.D)  of the Vakatakas, whose feudatories and minister supported the ”sangha”, the Mahayana Buddhists contributed to over 20 impressive cave excavations at Ajanta. These were embellished with mural art, sculpture and great architecture. The caves are cut into a mountain wall above the Waghora river.

The architecture of the caves were customised to the monastic needs of the Buddhists to include assembly halls, living quarters and spaces for meditation. A few caves are from the pre-Vakataka period. Some glimpses from sculptural marvels from the caves are showcased –

Cave 1 – Made under Harisena, this cave has an elaborate carved facade, with relief sculptures on the entablature and ridges, and most surfaces embellished with decorative carving. There are scenes carved from the life of the Buddha, animals, as well as a number of decorative motifs. 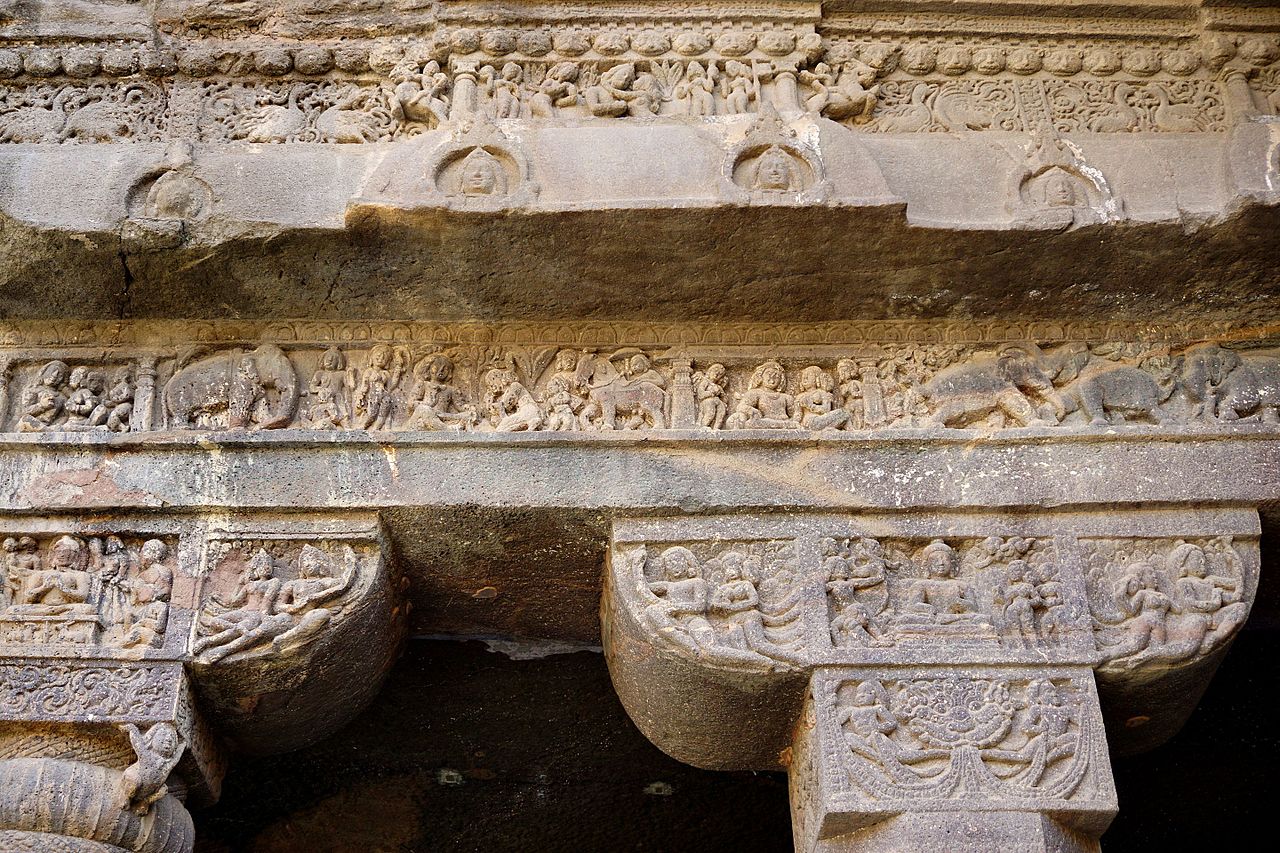 Cave 4 – This cave is squarish, with a large image of the Buddha in preaching pose flanked by bodhisattvas and celestial nymphs hovering above. It consists, of a verandah, a hypostylar hall, sanctum with an antechamber and a series of unfinished cells. This monastery is the largest among the Ajanta caves and it measures nearly 970 square metres. 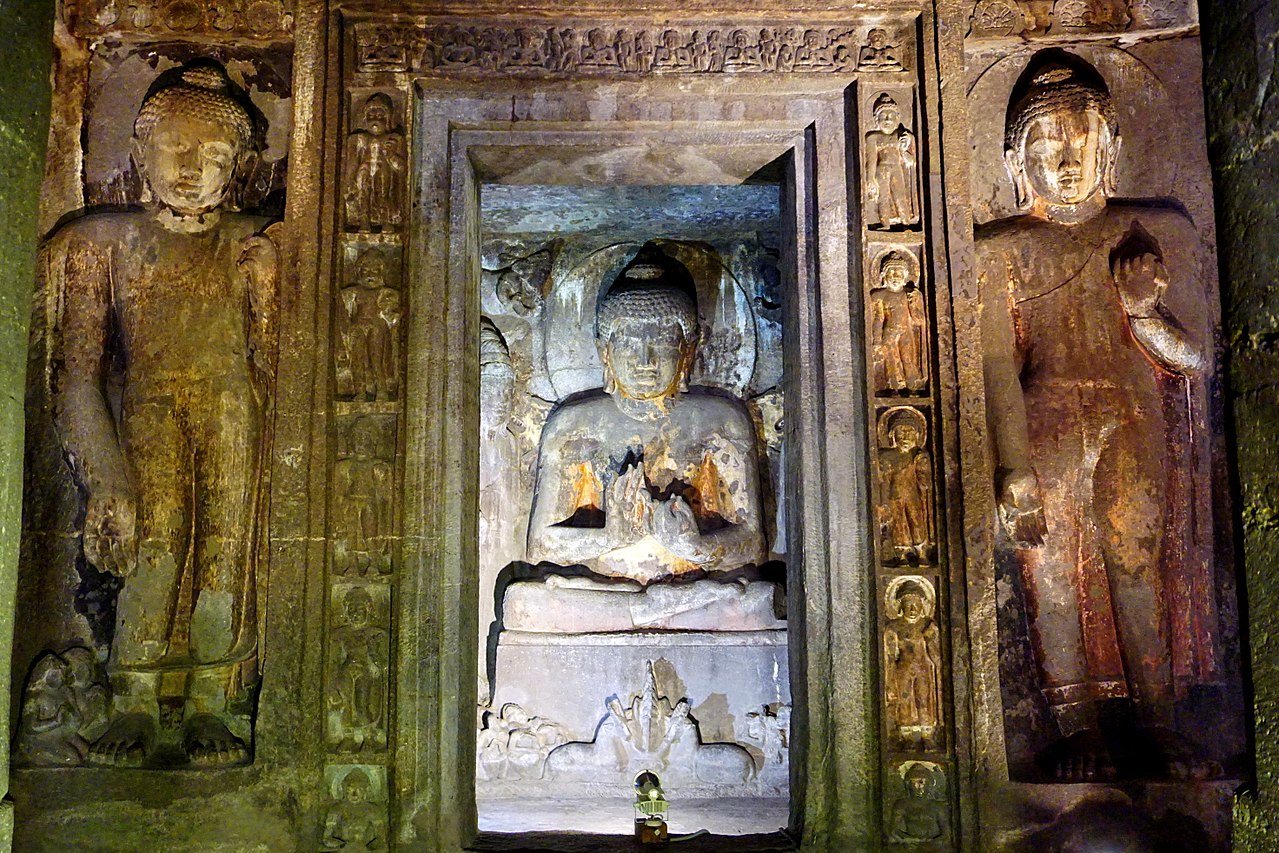 Cave 6 – It is two storeyed monastery  made up of a sanctum, a hall on both levels. The lower level is pillared and has attached cells, the upper hall too has subsidiary cells. The sanctums on both level feature a Buddha in the teaching posture.  The Miracle of Shravasti  and Temptation of Mara is depicted in the lower level walls. Only the lower floor of cave 6 was finished. The unfinished upper floor of cave 6 has many private votive sculptures, and a shrine Buddha. 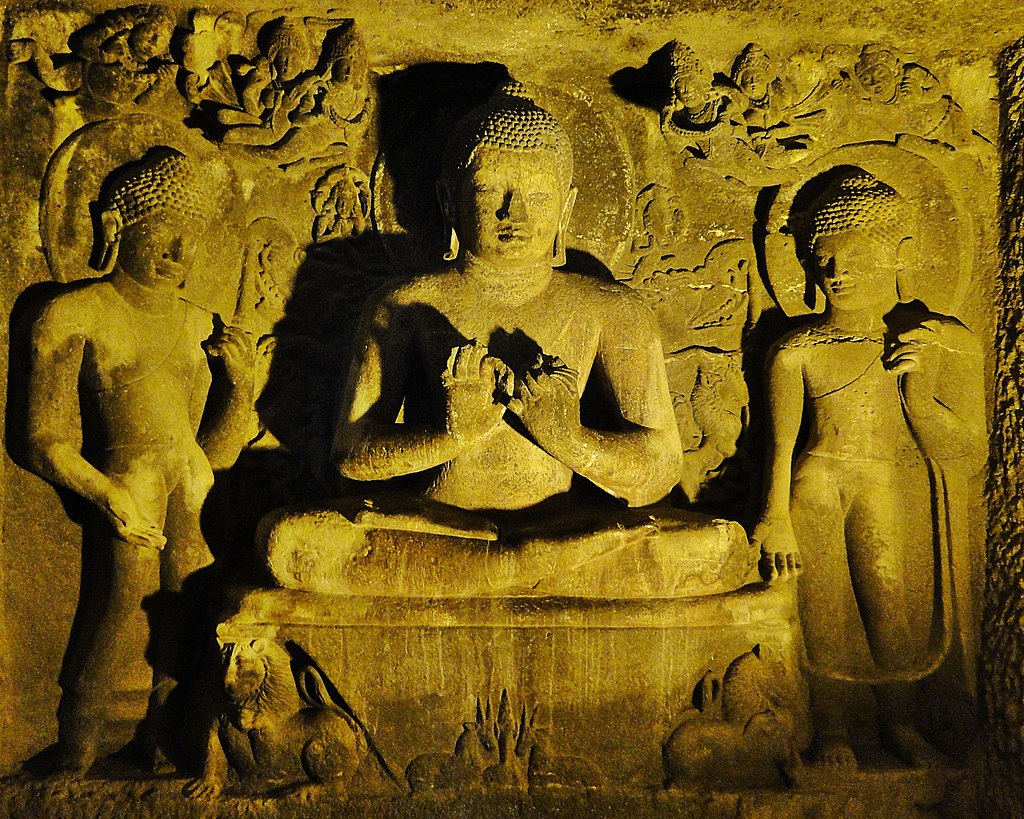 Cave 7 – a monastery of a single storey having a sanctum, a hall with octagonal pillars, and eight small rooms for monks. The sanctum Buddha is shown in preaching posture. There are many art panels narrating Buddhist themes. This cave has a grand facade with two porticos. The veranda has eight pillars of two types. One has an octagonal base with amalaka and lotus capital. The other lacks a distinctly shaped base, features an octagonal shaft instead with a plain capital. The veranda opens into an antechamber. On the left side in this antechamber are seated or standing sculptures, those of 25 carved seated Buddhas in various postures and facial expressions, while on the right side are 58 seated Buddha reliefs in different postures, all on lotuses.

Cave 19 –  This structure was completed during the Vakataka rule which which is grand chaitya hall. It has a courtyard with attached cells. It has an elaborate facade and a single entrance to the cave having a portico with pillars. It has a circular window  with lot of decoration around the opening. There are decorated pilasters and cornices. The grid has many sculptures, mostly Buddha figures. There is Naga group on the facade.

Cave 9 – This cave has a distinct apsidal shape. The aisle has a row of 23 pillars. The ceiling is vaulted. The stupa is at the center of the apse, with a circumambulatory path around it. The stupa sits on a high cylindrical base. It is a chaitya or worship halls from the 2nd to 1st century B.C, the first period of construction,  reworked upon at  the end of the second period of construction in the 5th century. Many sculptures adorn the facade, mostly Buddha images. 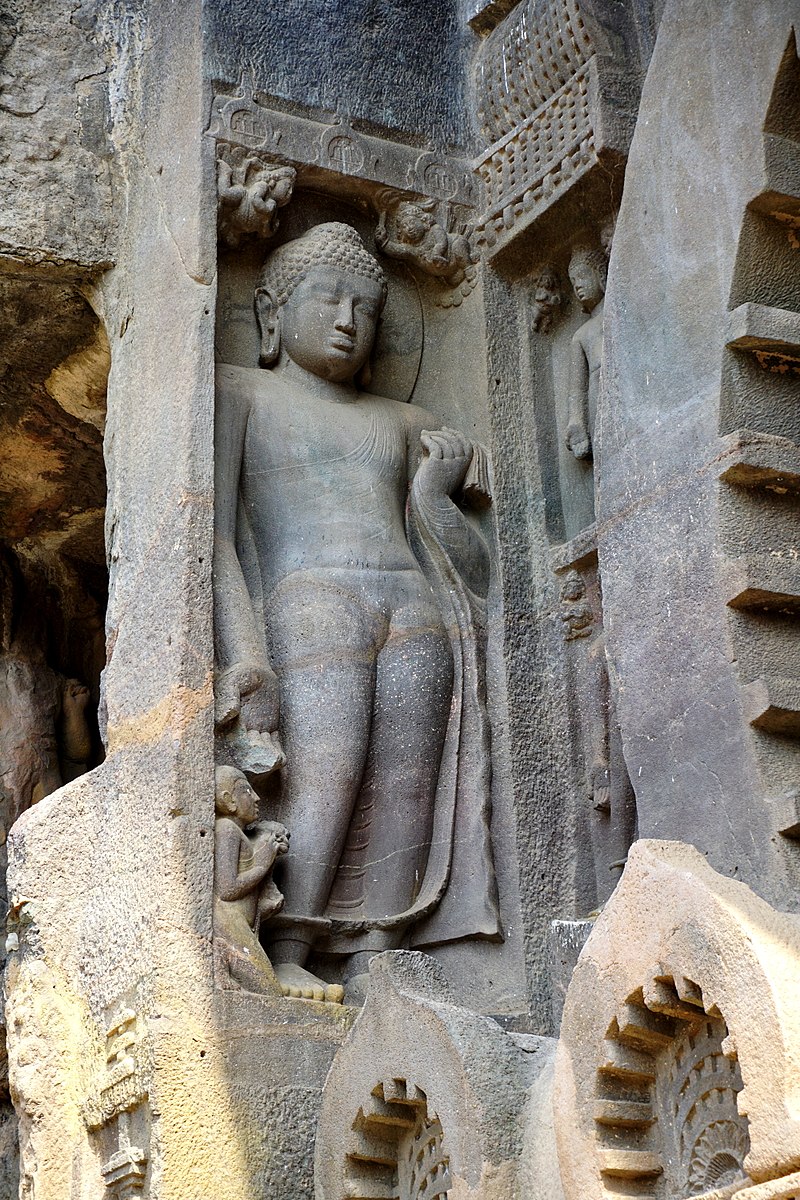 Cave 11-  It is monastery and the cave veranda has pillars with octagonal shafts and square bases. The ceiling of the veranda shows evidence of floral designs and eroded reliefs. The center panel is of the Buddha seen with votaries lining up to pray before him.

Cave 26 – It is  a worship hall or chaitya, with elements of a vihara design. The interior view of the cave gives a general appearance of a Mahayana vihara. An inscription states that a monk Buddhabhadra and his friend minister serving king of Asmaka, gifted this large cave. It has two upper stories and four wings of the cave were planned, but these were abandoned and only the carved Buddhas on the right and left wall were completed. The cave consists of an apsidal hall with side aisles for circumambulation . This path is full of carved Buddhist legends, three depictions of the Miracle of Sravasti in the right ambulatory side of the aisle, and seated Buddhas in various mudras. At the center of the apse is a rock-cut stupa with an image of the Buddha in front, 18 panels on its base, 18 panels above these, a three tiered torana above him. On top of the stupa is a nine-tiered harmika, a symbolism for the nine samsara in Mahayana cosmology. The walls, pillars, and brackets are intricately carved with Buddhist themes. 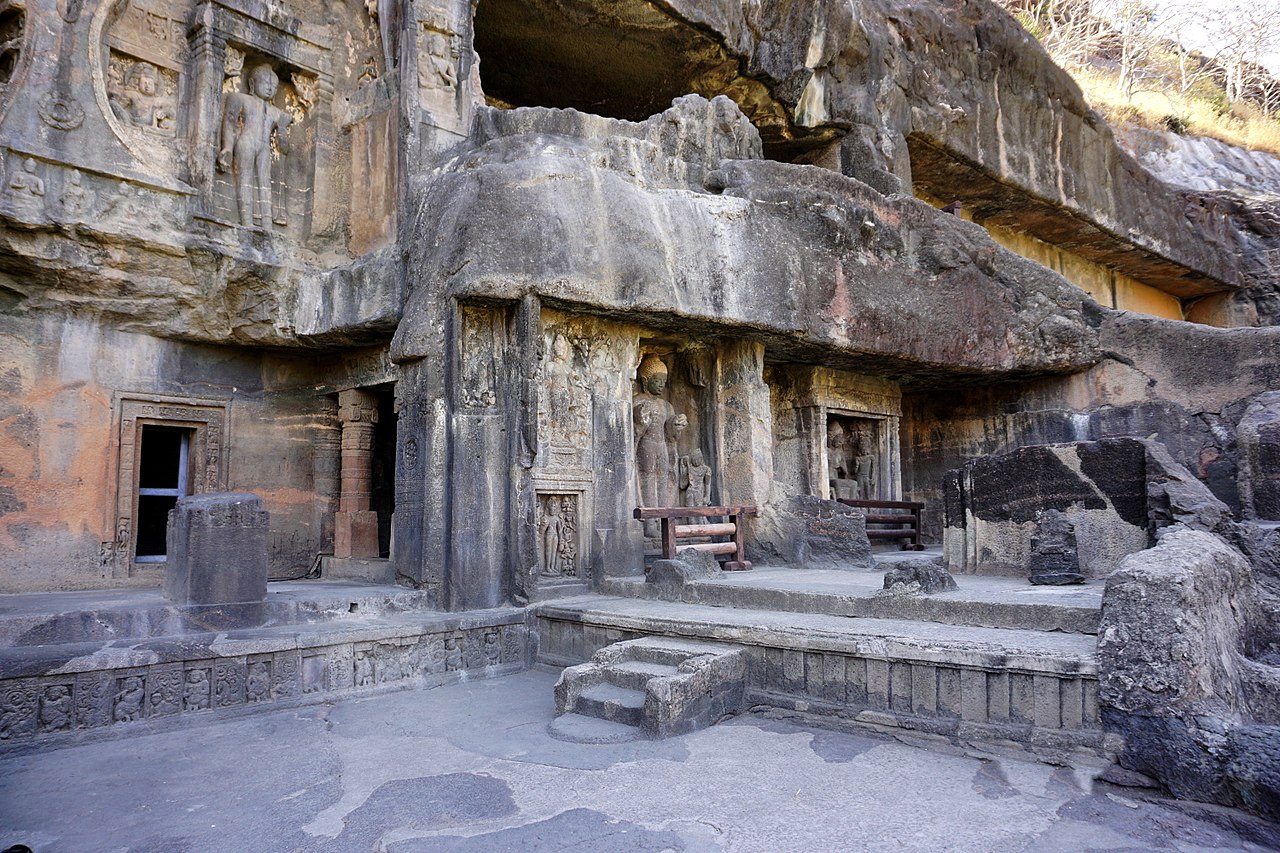 The enshrined Buddha is sitting in the pralambapadasana posture, with his legs down, maybe representing Maitreya, the future Buddha. 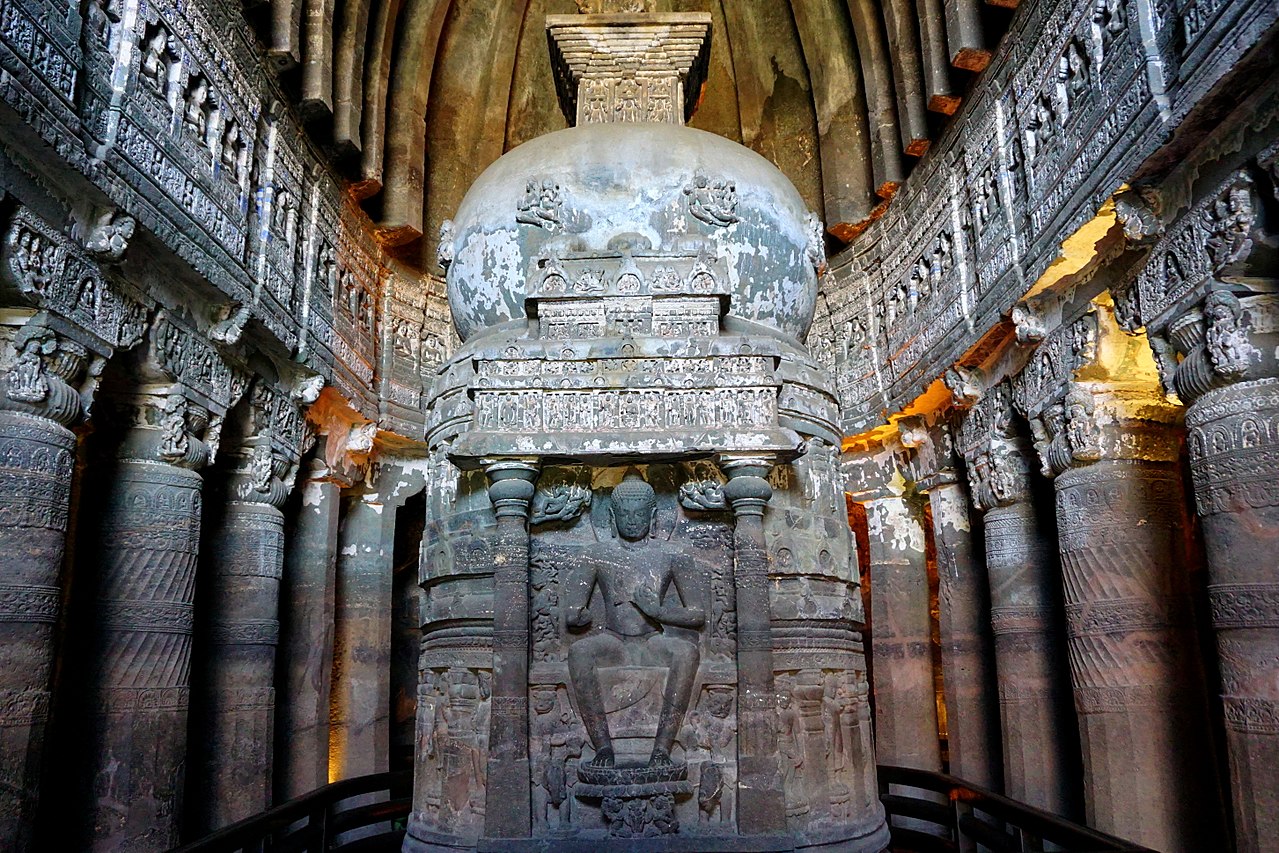 Pariniravana of the Buddha, Cave 26, Ajanta.