The Bodhi tree, a sacred tree ,the peepal , is a variety of fig, botanically Ficus religiosa under which Siddhartha Gautama attained enlightenment at Bodh Gaya; to become the Buddha. It has beautiful heart shaped leaves which glisten in the sunlight. Many sculptural depictions of the Buddha depict this tree. At the Mahabodhi temple in Bodh Gaya, a bodhi tree, believed to be the original tree’s descendant is worshipped by pilgrims. The tree at Shravasti where the Buddha performed many miracles, a bodhi tree called Anandabodhi is present. At Anuradhapura, Sri Lanka , the bodhi tree is believed to have been propogated from the original tree., known as Jaya Sri Mahabodhi.

The Buddha sits under the Bodhi Tree, Borubodur, Indonesia.

By Photo Dharma from Sadao, Thailand (015 E The Buddha sits under the Bodhi Tree) [CC BY 2.0 (http://creativecommons.org/licenses/by/2.0)%5D, via Wikimedia Commons

The Bodhi tree has many historical tales and happenings around it. It is believed that Emperor Ashoka of the Mauryan dynasty revered the tree in great measure and the spot was a holy site with a shrine in whose honour a festival used to be held every year. His queen grew jealous and tried to get the tree killed; but the tree grew back. The tree was again tried to be killed by King Pushyamitra Sunga in the 2nd century B.C. and King Shashanka in 600 A.D., but a new one was always planted in its place.

A seed was taken from a fruit of the Bodhi tree at Bodh Gaya; as it fell from its stalk and was caught midway by Mogillana, a disciple of Buddha. It was planted in a golden bowl which grew  very quickly and the Buddha  consecrated it by meditating under it for a night. It was planted by Ananda, his disciple, in front of the Jetavana monastery at Shravasti. The tree that grew is called Anandabodhi.

Bhikkuni Sanghamitra , Emperor Ashoka’s daughter along with other nuns, took a sprig of the tree from its southern bough to Anuradhapura, Sri Lanks’s ancient capital where it grew at Malta meghavana (grove of the Great rain cloud)  and was called Jaya Sri Maha Bodhi.  It was planted in 288 B.C. The tree considered the most sacred, was worshipped by Buddhists who performed rituals near it, as it was believed to augur rain and have powers of healing and fertility.  During Emperor Ashoka’s time , women looked after the tree and four royal maidens were chosen by him. They were bedecked with ornaments and would sprinkle water from golden and silver pitchers on the tree during the annual festival. The four maidens enjoyed great status at the king’s palace. The tree’s descendants are believed to exist in this area to the present day. 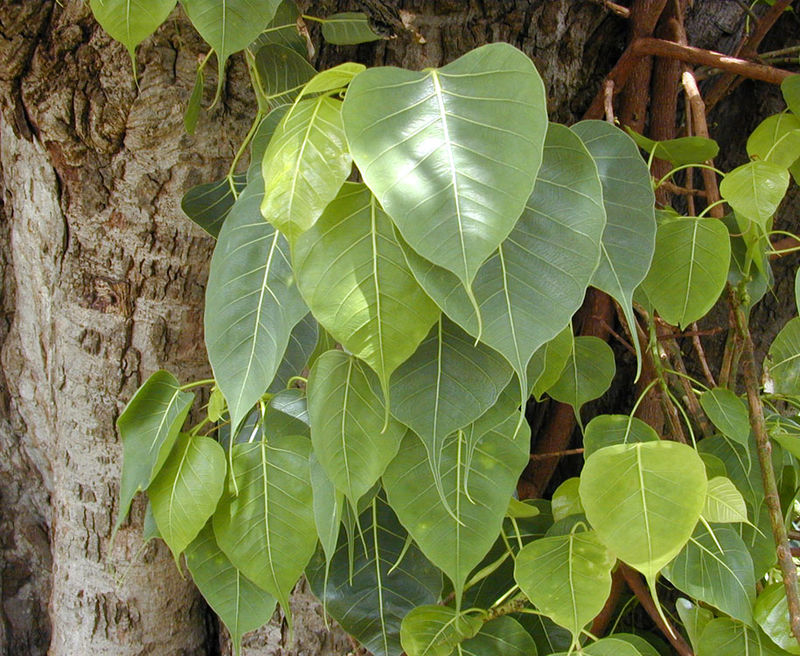 By Marshman at the English language Wikipedia, CC BY-SA 3.0, https://commons.wikimedia.org/w/index.php?curid=2203566

By Anonymous ancient artist from India or Nepal. [Public domain], via Wikimedia Commons