The history of urbanisation of Bengal seems to have started since the 1st millennium B.C ; after the decline of Indus valley civilisation. Ancient Bengal was a centre for trade and urban networking, with contacts up to Persia. The archaeological sites like Chandraketugarh, Mahasthangarh and Mainamati, the Bateshwar ruins all are evidence of a highly organised urban set-up. Architectural remains of early Bengal remain scarce, stupa fragments have been found  at some archaeological sites. The Pala architecture is remembered for its constructon of viharas and stupas. The Somapura Mahavihara is an iconic monument built by the Palas (now in Bangladesh).

The mode of building in rural Bengal is the paddy roofed thatched traditional chala type of huts. Temples have drawn inspiration from this and amazing number of temples have been constructed in different districts of undivided Bengal with many interesting variations. What follows in the rest of this write up is the variety and piety of these structures, many of which are still available for us to see !

In early times wood and bamboo were used as building material. After that bricks were used. The land of Bengal has alluvial soil and stone is not much available. Hence brick is used for building. the architectural parts were made of stone and wood, black basalt, sandstone , granite and black marble. Initially lime or mud was used for the floor concrete. Later mortar was used and lime was used as a plaster. the accounts of travellers Fa-Hien and Hieun Tsang mention temples of stone and brick in ancient Bengal. The Ramcharita of Sandhya Kar mentions Bangarh as an important temple city. But most of these temples have not survived to this day and have destroyed either due to climate or by invaders.

The main types of temples in Bengal are many and varied yet a basic similarity is detectable, a beautiful architectural signature !

Firstly the Bhadra type : roof is of horizontal tiers which diminish gradually and are topped with a amalaka sila. The Rekha type has a sukanasa shikhara or tower which is curvilinear and topped by a amalaka sila carrying a kalasa or pot of plenty. A hybrid of these exists which is bhadra with a stupa as acrown. Another variety has a shikhara as a crown. The Sarvatobhadra is a square temple with four entrance points on four sides. Usually five storeys and sixteen corners, spires and turrets are parts of the temple. The hut or chala type of temple have sloping roofs. The ratha type is arranged in tiers of bent cornices, corners with miniature curvilinear towers and topped by a large sized shikhara. The Bhadra type of temples can be studied by the image of Nandi pavillion at Ekateswara at Bankura district, with two receding tiers. the evolution of this type is exemplified at Jangibadi in Dhaka with a amalaka sila crowning the structure. Further on, it can have  kalasa as already mentioned, as in Mandoli, Kumarpur. The Rekha deul or temple are slimmer, taller, curvilinear and built on a square platform. with a amalaka sila or kalasa crowning the structure. Gothic architecture has influenced the design of these temples. The hut or chala type of temples has sometimes been called ‘cottage architecture’ of Bengal which resembles the thatched roof. There are many such temples across Bengal. The terracotta temples when classified based on their number of spires or superstructures are a type of chala or ratna respectively. The single hut are the ek-chalas, the double huts  type are called the do-chalas. The others include triple huts, the teen-chalas, twin huts the Jor-mandirs or temples, the twin double hut type and the grouped hut type.

Twin hut type or Jor-Bangla are temples where two do-chala hut type temples are joined. The twin temples of Bimanagar, Nadia and Bishnupur, Bankura are of this type and decorated with ornate carvings. The hut type also influenced the Sultanate architecture of Bengal. 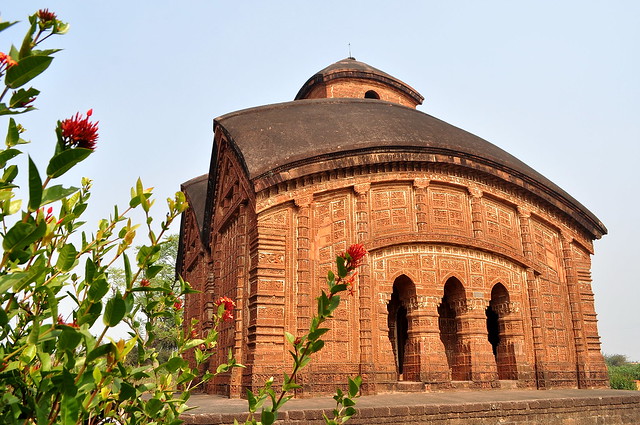 The Rasamancha at Bishnupur is different and does not conform  to the styles mentioned. It has a circumbulatory passage on all sides. It has a square chamber with arched openings and has a pyramidal roof. It stands on a five-foot high platform. The innermost gallery has 5 arched openings on each side, the 2nd has eight and the last has four arched openings. The outer arches have four do-chala roofs with one smaller four chala at the corners for decoration. 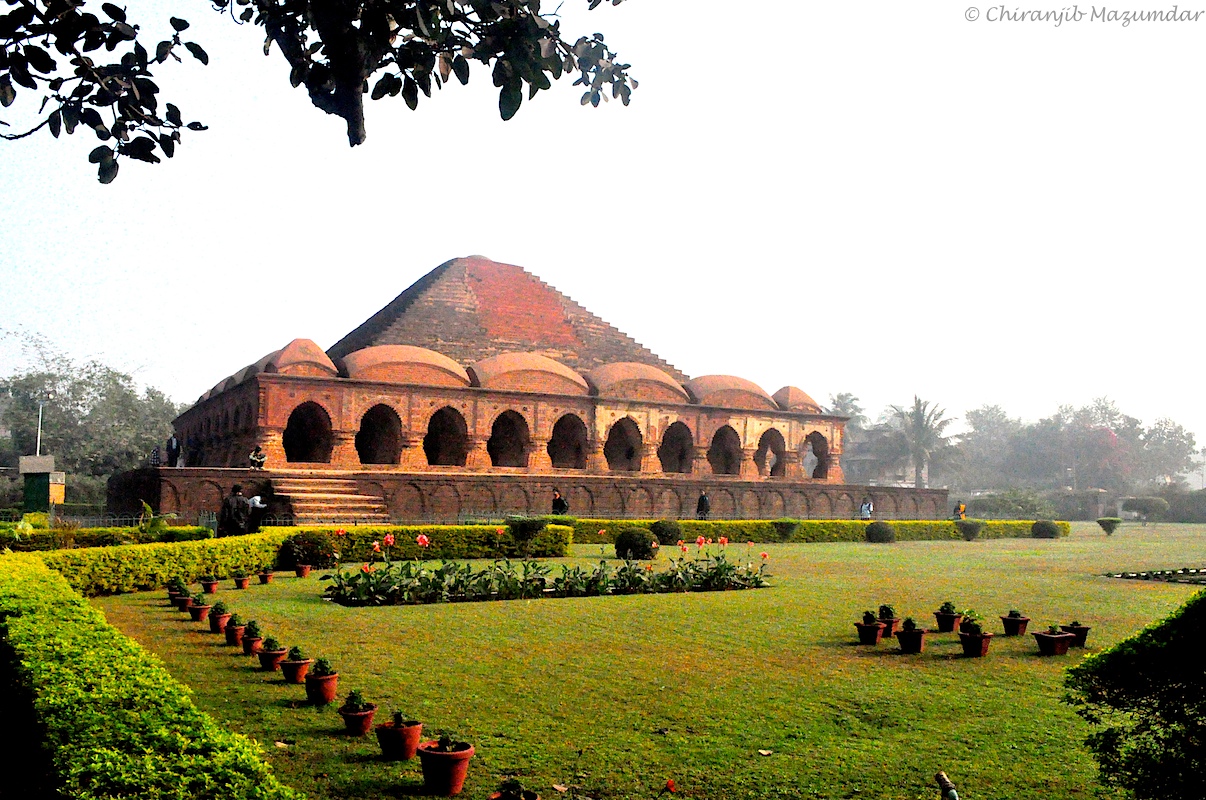 The temples across Bengal are mostly on platforms up to 6 feet in height. The main temple has a sanctum, with a  covered verandah in front mostly with three arches with pillars. On top of the temple there are spires.  The Kalighat temple at Kolkata is a char-chala or having four sloping roofs.  The Ratha typre of temple is exemplified by the temple at Kantanagar (presently at Bangladesh) at Dinajpur. The ratha type combines the hut and shikhara design. These temples stood on platforms with bent cornices and three arched openings on each side. A long spire is in the centre surrounded by 4,8,12,16 or 24 spires. The Hangeswari temple at Hooghly is a 13 spired ratha temple, south facing having 12 arches with ornate terracotta design. 25 spired ratna temples or panchabhimsati ratna are seen at Krishna Chandra temple at Kalna, Bardhaman. The Ananda Bhairabi temple at Sukharia, Hooghly built in 1813 has three storeys and 25 towers. At some places separate rathas were made. One example is at the Radha Gobindo temple at Bishnupur in Bankura district.

Palpara temple in Nadia is a char-chala,one of the earliest forms of temple architecture in Bengal , built in the 17th century by Gandharba Roy, also called Math mandir and Kali Mandir. The char chala structure stands on a raised plinth and  is made of brick facing south . and is around 21 metres tall. The decorated arched entrance is flanked by brick pillars on either side. The area above the arched entrance once contained intricately carved terracotta panels.  Some scenes from the Ramayana, geometric and floral patterns and the lotus motif still remain. Later the char-chala was modified into the at-chala, which consists of a char-chala upon a char-chala, and is a most common type of temple architecture in Bengal. 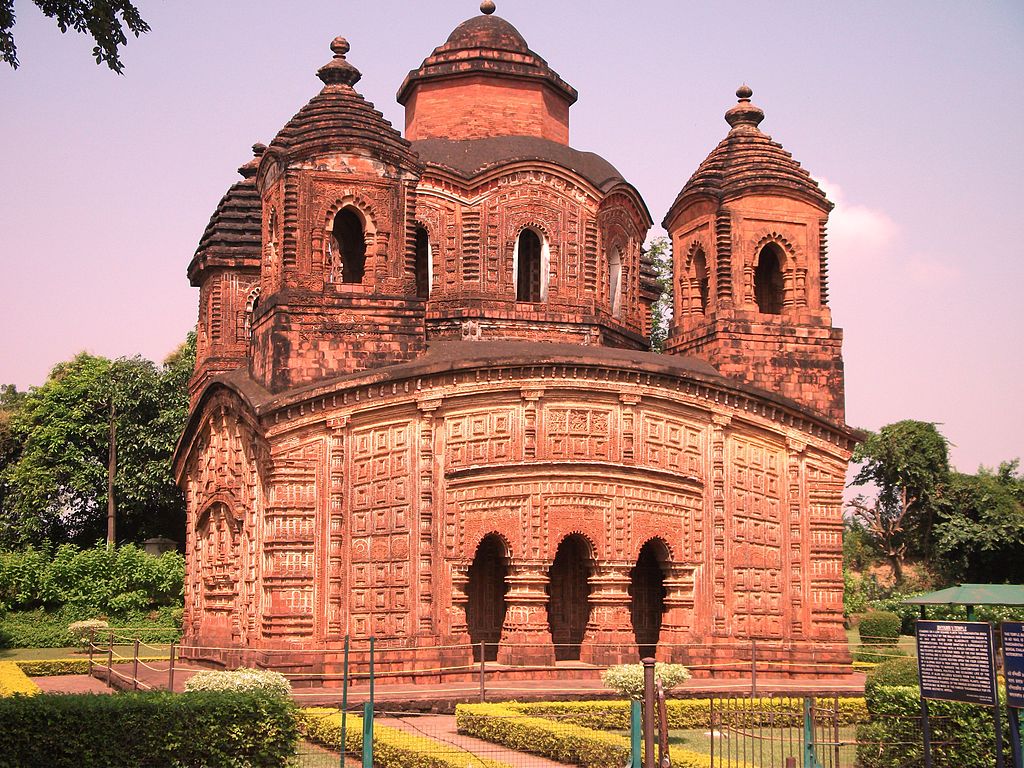 The temples of Bengal and their exquisite architecture has influenced the temples of Burma, Siam, Cambodia, Java and Nepal. The sculpture at the temple vide the terracotta art was the art of the common people. 17th century onward to the 18th century was a period of expression both for the artists, craft-persons and the patrons alike. The patrons were the rulers, landlords and wealthy merchants. There was a lot of temple building at Bardhaman, Birbhum, Bankura, Nadia, Hooghly and Murshidabad. The depictions on the temples are condensed and full of vitality. There are panels of processions, soldiers, horsemen,elephants with their riders, deities, geometrical motifs, floral motifs, miniature temple are shown above the other. Scenes from the epics, social scenes,, Europeans, love scenes too can be seen at different places.  The 19th century saw some flat roofed temples being built. Temple building of this type went on up to  the middle of the 19th century. It declined under Western influence. 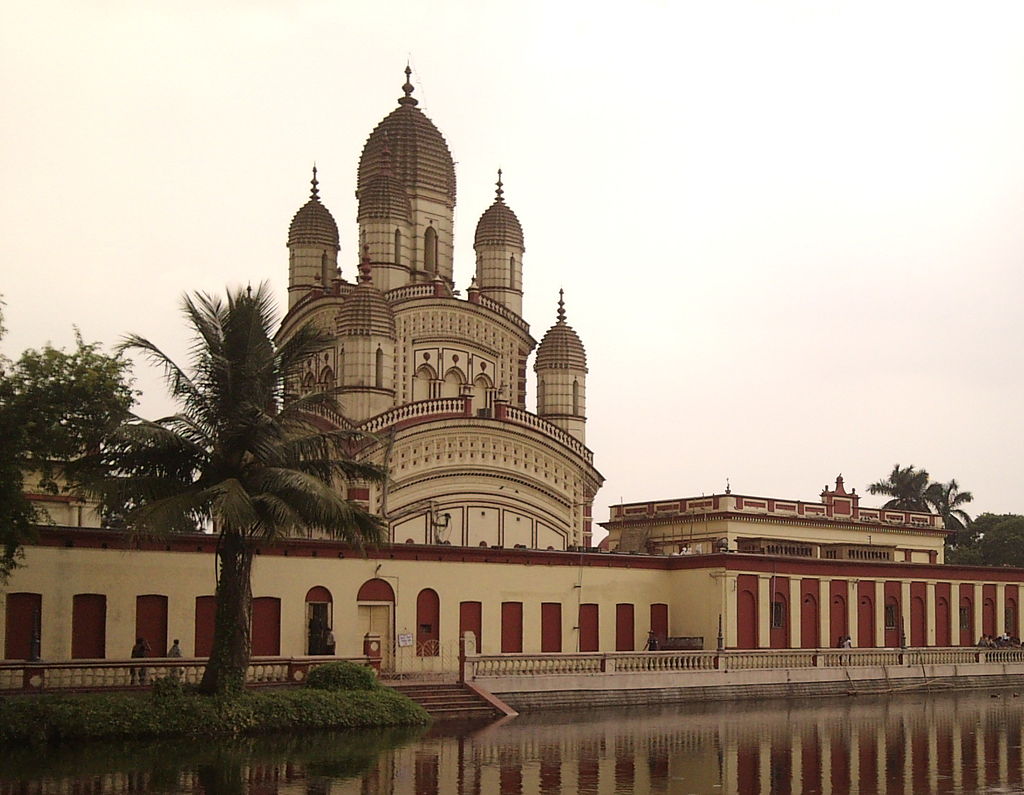 Ek-ratna, Lalji Temple in the city of Bishnupur, West Bengal.

By Amartyabag (Own work) [CC BY-SA 3.0 (https://creativecommons.org/licenses/by-sa/3.0)%5D, via Wikimedia Commons.

The word deul is actually a nomenclature given to a temple style of Orissa, North India and Deccan between 6th and 10th centuries. The temples of Bengal are termed as the Rekha deul, having  a square sanctum, curvilinear shikhara or tower, vertical ridges or projections on the walls. 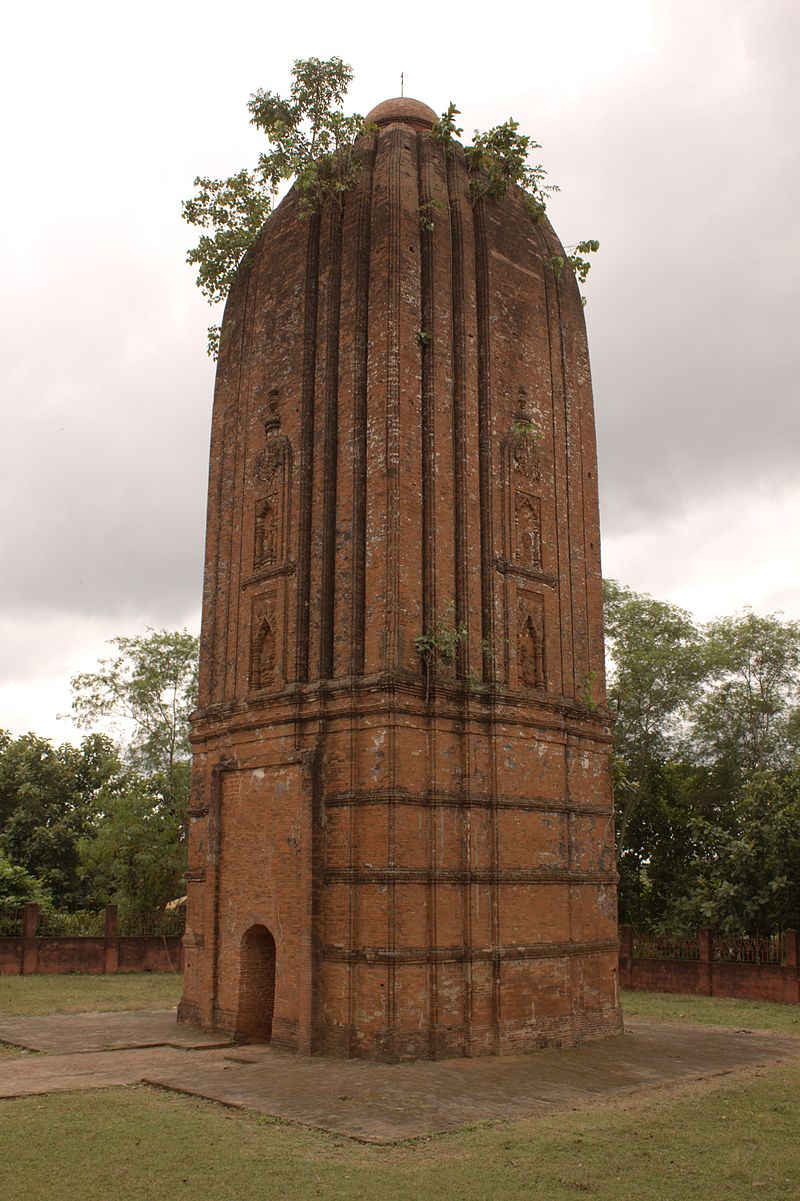 By Imranforestry (Own work) [CC BY-SA 4.0 (https://creativecommons.org/licenses/by-sa/4.0)%5D, via Wikimedia Commons