Mention Mandu and everyone recalls the famous love story of Baz Bahadur and Rani Rupmati. Located in the Malwa region of Madhya Pradesh, now in Dhar district. the place has some amazing history along with beautiful built structures which illustrate the romance. Rupmati is a shepherd girl who Baz Bahadur, met during one of his hunting trips. He was the last ruler of Malwa, son of Shuja’at Khan; he heard her singing and was smitten by her beauty.  He asked her to come to Mandu, to which she agreed but asked to live at place not far from him and the Narmada river. This led to building of the Rupmati pavillion and the Rewa Kund. It is believed that they married as per Hindu and Muslim rites.

Unfortunately in 1561, the Mughal Emperor sent Adham Khan to conquer Mandu. Baz Bhadur fled to Chittorgarh to seek help. The army of Malwa was no match to the Mughal forces. Mandu was defeated in the battle of  Sarangpur. Rani Rupmati did not want to be captured and poisoned herself.

The story of Rupmati was written by Sharaf-ud-Din Mirza in the Persian language. He collected 26 poems of her; the original manuscript changed hands and and was translated by L. M Crump in 1926, under the title : ‘The lady of the lotus – Rupmati, Queen of Mandu, a strange tale of faithfulness.

Excerpts from the translation :

……Her eyebrows are like unto the curves of the letter ‘Nun’ or unto rainbows in the heavens : to twin black fishes in the fountain of the sun, to the sword of that for the terror of infidels was sent down on earth : horns of the deer of sight are they or the sacred book of a temple of the idolaters : feathers of the wings of the falcon of vision or the invocation of the name of God. The painting of her eyebrows is as two crescent moons set each on other or twin daggers over twin swords : green  sheaths are they of the sharp falcons of her brows or two green leaves of the tree of Paradise. The tail of her eyebrow is the sting of the scorpion or the point of the sword of the executioner. The line of her knitted brows is a gleaming blade or a ripple in the wine-cup of her charms.…

…..more often soon than late, for he neglected all things for her company, they would sing to each other the songs of love which they had composed, or, calling the musicians and the singing and dancing girls, listen to their songs of love and war. Fair was life to them evening after evening on the roof of the Ship Palace, in the heart of their dear city impregnable, looking out over mosque and tomb, dome and cupola of blue and green and yellow and of marble white, and beyond, to lake and wood, to hill and vale fair indeed, and all the fairer for the music in their ears and the love within their hearts. Yet was not Rup Mati slow to perceive that herein lay danger for Baz Bahadur. His nobles delighted to gather round him and ply him with wine, till he knew not night from day…..

The songs and verses which are said to have been composed by Rupmati are dohas, kabittas and sawaiyas still sung in Mandu ! Also a part of  translated work by M.L Crump, The lady with the lotus. 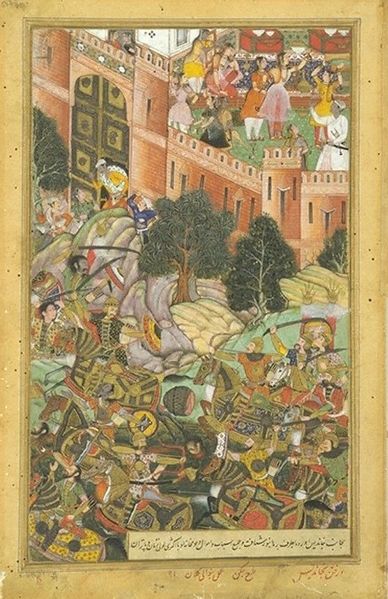