Books have always been an important part of human culture used to  communicate, inform and entertain. There are different types of books, some printed and some in manuscript form. The decorative element in book covers and book binding has been important in bindings of yore. Combining beauty and strength has been a historical practice.  One  of the definitions of book binding states it as a term applied to any process for making a book by fastening together printed or un-printed sheets of paper and providing them in this compact form with a suitable covering. Book covers can be made of paper, cloth or leather. Around 100 B.C in India religious sutras were bound together which were written on palm leaf  which were numbered, had a hole and a twine passing through them. From then on book-binding travelled a long way, with the introduction of the codex, leather tooling, wood covers giving way to pasteboards, dust jackets, cloth covers, case bindings, gild bindings, glass bindings and ornate bindings using ivory.  In India, writing was done on stone, metal, shells and earthenware.  Also wooden board,  birch-bark palm-leaves, cotton cloths and paper was used. Engraving, embossing, painting and scratching methods were used for writing. Showcased are some book bindings from the Indian subcontinent.

This pair of wooden covers protected the palm-leaf folios of a Buddhist sacred text. One cover has the nine Buddhist goddesses, each holding a staff surmounted by the wish-fulfilling jewel or chintamani, while the other cover has the five transcendental Buddhas flanked by four bodhisattvas. Painted on the interior, the iconography offers a protective field to the holy text within, in this case likely the Perfection of Wisdom text, the Ashtasathasrika Prajnaparamita Sutra.

The book cover is of lacquer binding with central floral design of an illustrated and illuminated copy of the collection of poems or divan by Shams al-Din Muḥammad Hafiz al Shirazi (flourished during 13th century AH / 14th century,  produced in India, most probably Kashmir, in the 19th century. 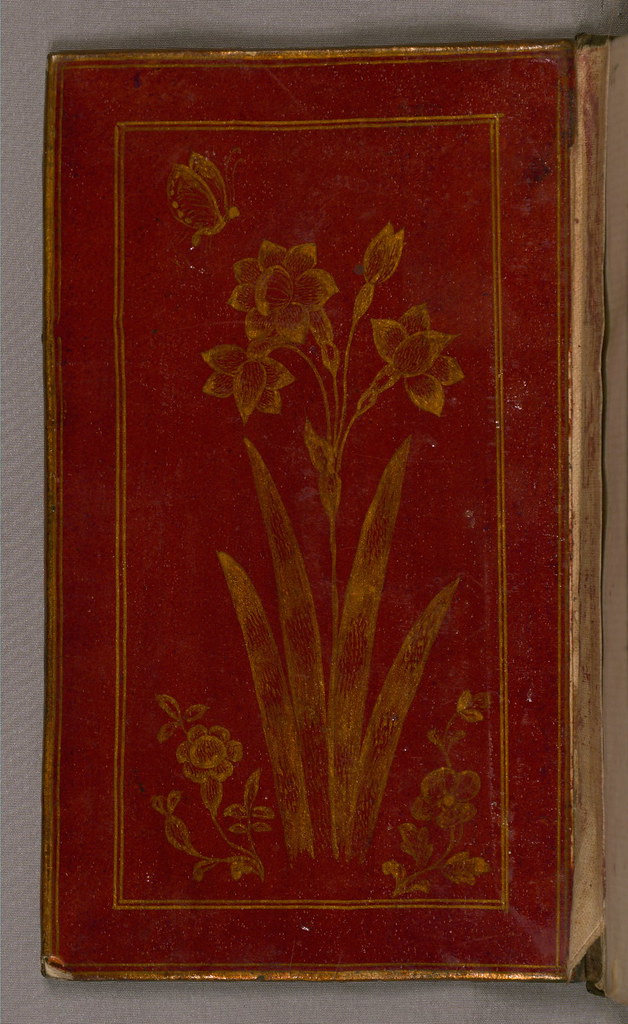 The image below depicts a binding from most probably the 13th century AH/19th century. The binding is composed of lacquer and is decorated with a floral design covering the whole surface of the boards. 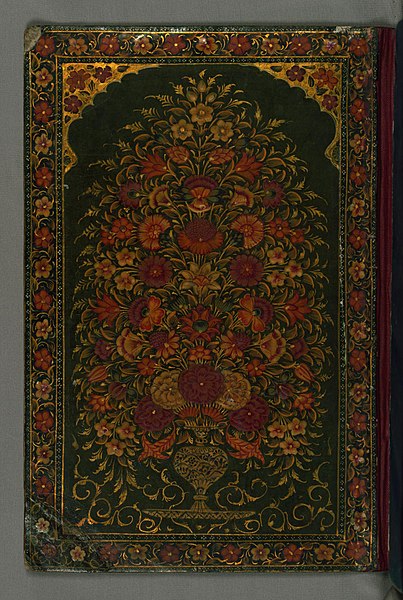 Seen above is the end board of a Sinhalese palm-leaf manuscripts transcribed in 1874. This example is of a lac-worked Kandyan book cover comprising the traditional motifs of a string knot at either end with a single vine scroll between the punched holes and a flower around each hole with a diamond chip motif  border, Sri Lanka, 19th century, Wellcome images, Public domain image.