The art of Kalamkari  originated in Machilipatnam, Pallakolu and other places along the Coromandel coast during the 17th century.  It originated as a religious tapestry and later became a secular craft under Muslim rule. The kingdom of Golconda in the Deccan, India was a trading centre for diamonds, gems and textiles. The word Kalamkari or working with the pen evolved when the Golconda Sultans called the craftsmen as ‘kalamkars‘. ‘Kalamkari‘ thus literally means, art work done using a pen. The craft continues to this day with many families devoted to this art. Natural substances from plants, trees and seeds are used in the art and called painted using resist and mordant technique. Depicted are some images using this technique, of the tree of life, a unique and universal concept.

The tree of life is a concept mainly from mythology, a sacred belief connecting all forms of creation. it is depicted in various cultures and traditions of the world. The tree of life is thought of as related to the eternal, a destroyer of sorrow, health, fertility, wisdom and calmness. In the Hindu faith it is the wish fulfilling Kalpavriksha which grants every wish. In Christianity the tree is the source of eternal life. The tree of life is the tree of immortality in Islamic faith. The concept spans across cultures. It is asymbol of connectivity, having roots with the soil; the leaves and branches reaching to the sky, receiving the sun and air. The tree of life represents continuity as it grows from a seed and creates a fruit with seeds, which again gives birth to the new. The tree of life is a symbol of rebirth, the leaves fall in autumn or hibernate in winter and in spring the new leaves appear like being born again.

Tree of life,  Tent Hanging or Curtain, late 17th century, Golconda, LACMA, U. S. A.
Charles Darwin proposed a tree of life which is symbolic of the source of all living things. In Chinese mythology,a dragon and phoenix are depicted in the tree of life. The dragon represents immortality. The Bodhi tree is the wisdom tree under which Siddharta Gautama attained enlightenment and became the Buddha. This tree is seen as one where once can seek refuge from worldly desires. the Celtic tree symbolises the forces of nature joining together to maintain balance in the universe. Many animals are are also seen in the tree of life depictions. Birds too are seen on the branches. sometimes the underworld is shown with a water-monster. All forms of life are connected and humans should live in harmony with the world. Everyone has a right to exist and grow as we are children of the Universe.

The block-printed and dyed textile from the Coromandel coast depicted below consists of a tree of life within ovoid medallions, flanked by cobras and peacocks, the border is of a continuous floral garland. Originally this technique of painted resist and mordant happened under the rule of the Golconda kingdom (1512-1687). However the practice continued in the following centuries with ups and downs, but continues to this day though the designs have changed over the years. The technique was called Kalamkari which is still prevalent. 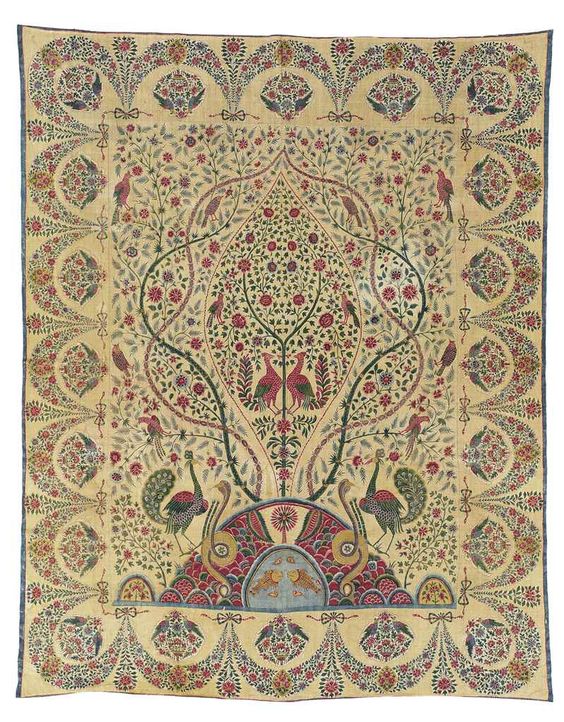 Palampores were a regular feature of the 18th-century chintz trade to Europe, where they were used as wall hangings and bed-covers and table-cloths. The embroidered palampore below was chain stitched in silk on cotton to create a painted effect. The craftsmen have worked out white silk stitches within the flowers to simulate the tiny white  patterns that appear on painted textiles. Instead of shown as emerging from the usual hilly mound, this tree grows out of an interpretation of a Chinese scholar’s rock, highlighting the overlapping of Chinese, Indian, and European motifs in 18th-century exotic textiles from the East. 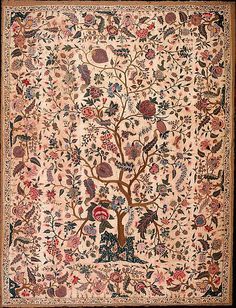 Palmapores depicting the tree of life show a central flower-and-fruit-bearing serpentine tree emerging from a hillock with stylized peaks or rocks. In addition to those produced for the Dutch and English markets, a class of smaller palampores was made expressly for the intra-Asian trade. This painted version depicted below was originally sourced to Sri Lanka, maybe produced for the European communities in Batavia and Colombo.

Palampore, painted resist and mordant, dyed textile, Coromandel coast, early 18th century, Met Museum, U S A.
The textile piece below is a tree of life depicting the mound, peacocks and flowering tree. The border is an ornate double floral scroll. Done using the Kalamkari technique it is an exquisite work.

2 thoughts on “Tree of life : images from Golconda textiles”