Terracotta or baked clay has been used as a medium to create objects of beauty and utility and votive objects for rituals since ancient times. Clay is available in abundance in the Gangetic valley. The history of using clay goes back to 2nd century B.C.  Excavations at Pandu Rajar Dhibi, Chandraketugarh and other sites have revealed interesting figures made from terracotta. There have been evidences of the art from the Mauryan period from the excavations at Chandraketugarh, Tamluk and Bangarh. The figures are of folk origin made by hand using applique technique; the mother goddess and animal figures continue to be made and used for rituals in rural Bengal, having an ageless quality about them.

Different types of figures have been found relating to the pre-Mauryan times. Beak-headed mother goddesses with pin-holes and large breasts, fertility goddesses with wide hips, wearing girdles with pin holes. Bull front with fan shaped shaped hump too has been found. During the Mauryan times, the torsos were modelled by hand, faces were moulded, dress and ornament were made separately and fixed. The women were portrayed with full breasts, heavy hips and resembling a fertility goddess. Different historical evidence as gleaned from the Indian epics and archaeological findings are indicative of Aryan settlements in North and south Bengal. but the Aryan culture took centuries to gel with the indigenous culture of Bengal. The excavations undertaken all over Bengal revealed that the maximum objects were made out of terracotta which tell us the story of Bengal from yore. Bengal temples find mention in the travelogue of Fa-Hien and Hieun Tsang, Gupta period inscriptions and the illustrations of Buddhist manuscripts. 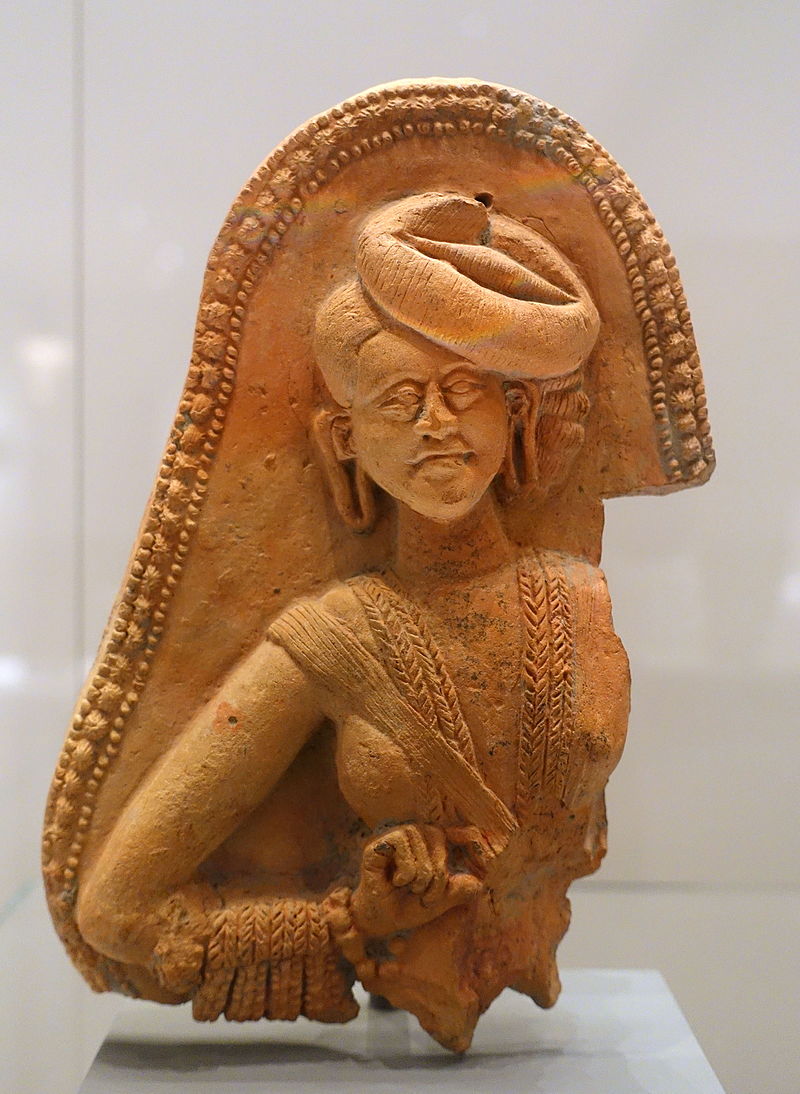 Terracotta has been a material abundantly found during excavations and clay seems to have been a popular medium used by common folk to express themselves. Clay objects from 1st-2nd millennium B.C have been found at Pandu Rajar Dhibi. Excavations at Tamluk, Bangarh and Chandraketugarh  have resulted in terracottas which include male figures, fertility goddesses and yaksha/yakshi figures. the women figures are depicted wearing elaborate head-dress,knob-earrings,heavy bangles and neck-pieces. the dress and drapery have been done on these figures using applique technique. The terracotta art found at the ancient sites also reveal nagas, naginis, apasaras and kinnaras. The other art objects are toys, animals, birds, erotic motifs, narrative plaques and pottery with designs. Gupta period terracottas have been found at Birbhum district of West Bengal.

Yakshas and Yakshis resemble human figures but cannot be clearly identified as divine beings or ordinary mortals. They are associated with emblems, animals, birds and mounts.  During the Mauryan and Sunga period their images were frequently made and have been found at various sites. Kubera, the leader of the yakshas has been depicted too. Yakshis outnumber yakshas and are seen with hairpins, common in both West Bengal and North India. They wear heavy jewellery like ear kundalas, sirastraka, necklace and bangles.

Toys  and animal figures in terracotta were made for children. Clay carts were most common usually the two or four wheeled chariot type cart. The animal depicted would be a ram or horse. Plaques depicting Jataka tales have been found at Chandraketugarh. Amorous couple have been found at Tamluk and Chandraketugrah.

By Hiart (Own work) [CC0], via Wikimedia Commons