A horse is an animal who represents energy and movement, known to man for ages. The horse is a companion and a useful animal for various purposes and has been used extensively to drive chariots, carts and as the Cavalry Force along with its rider in battles of yore. Swift and reliable, the horse is revered and there have been many famous horses known to have even saved their riders life. Such is their loyalty.   In Bankura district of West Bengal the horse is depicted as an art object with some ornamentation.  This Bankura horse has become an iconic symbol of Bengal art . The Government of India uses it in its logo for All india Handicrafts. Such is the magic of the horse depiction. It is found at many homes across India and abroadin drawing rooms and gardens. The presence of the Bankura horse immediately livens the space. Made of terracotta or burnt clay, the horse is either mud-brown or black in colour. Elephants are also made by the craftsmen or karigar, but the horse has got more prominence and popularity. The Bankura horse is produced mostly  in the Panchmura village of Bankura district. The other places where the kumbhakars or  potters make this horse along with other depictions like the elephant are Rajagram,Sonamukhi and Hamirpur. Also at Biboda,Kamaridha,Bishnupur,Jaikrishnapur,Nakaijuri and Keyaboti. The popularity of the icon has led to its being made in metal and wood. 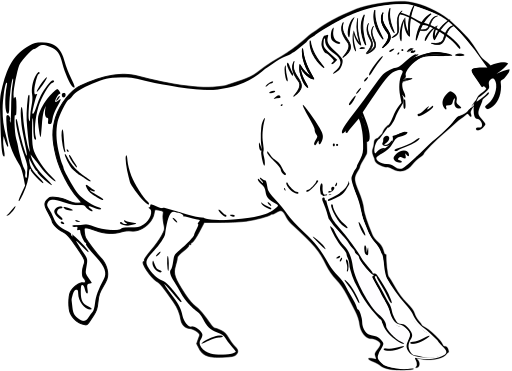 By warszawianka [CC0], via Wikimedia Commons

The history of the Bankura horse is interesting. It was initially used at village rituals as a symbolic sacrifice. This is done to appease village Gods and Goddesses for fulfillment of wishes. The horses stand tall and erect with lively long ears. They wear the Chandmala on the forehead. The horses made for worship are usually not hollow but solid.  Dharmathakur who is also believed to be a form of Hindu God Surya rides on a seven-horse chariot.

The brick and terracotta temples of Bengal built during the 17th and 18th century depict animals, birds and humans along with floral and geometric patterns as part of the temples as plaques or medallions and also as narratives on the walls of the temples, of  the epics, the Puranas, Radha-Krishna and everyday scenes reflect the expertise of the artists and the refined taste of the patrons.

The horses are made by the use of a tool called the ucha, a semi circular piece of bamboo. Balya is a stone tool, used for beating, also pitna, a wooden beater. Bamboo Chiari is used for decorating the figures.The potters wheel and kiln are also used. The parts of the horse or elephant are made separately on the wheel and later joined to from the horse. The ears and tails are made in moulds and fixed on the body on grooves. The figures are kept to dry a bit in the sun, then kept inside to dry fully and again heated outside and then the figures are coloured with natural colours. The pigments are mixed with water and applied. The colours are fixed in the kiln. 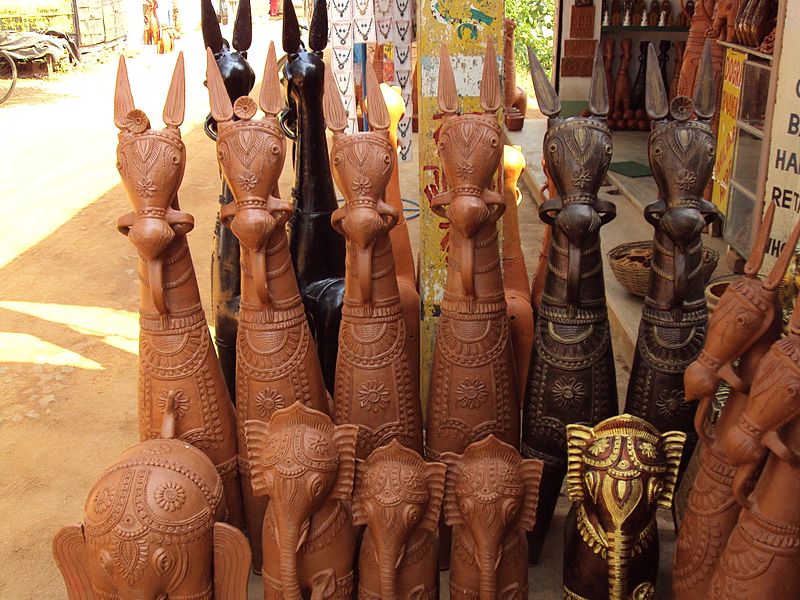 By Amartyabag (Own work) [CC BY-SA 3.0 (https://creativecommons.org/licenses/by-sa/3.0)%5D, via Wikimedia Commons

Kantha embroidery on quilt with a horse depiction, 19th century.