Between the late 1st century to 3rd century the Kushanas ruled parts of Central Asia,northern India,ancient Gandhara (Pakistan and Afghanistan). They had arrived in Bactria in 135 B.C a branch of the Yuch-chih, called Kushana or Kusana; residents of Kan-su region of China. They were forced westward by policies of the Chinese Han dynasty. The Kushanas founded an empire. Their deities and kings were depicted on coins. They had issued coins in gold. The Kushanas believed that the emperor was a divine being. Shrines were built for them. The Mat shrine near Mathura is one of them.

Kushana art depicts princes, royal portraits, images of Lord Buddha, scenes from his life etc. The art is influenced by Persian, Greco-Roman and Indian styles. The Gandhara and Mathura styles have unique characteristics. Under Kanishka I Buddhist art flourished, and many stone images were produced. He was responsible for the spread of Mahayana Buddhism from Gandhara to China.

The Gandhara school of sculpture produced very natural looking figures influenced by the Hellenistic and Roman styles. Many  motifs were from Roman art, eg. vine scrolls,centaurs,cherubs bearing garlands etc. The sculpture was done in green phyllite and blue-green mica schist. Originally they were painted and gilded. The Buddha figures have youthful faces and resemble the Roman imperial statues.

A gold coin below shows Oisho or Shiva with the ΑΔϷΟ (adsho Atar) on the left and Kanishka’s dynastic mark is seen on the right.

Kanishka I coin with Oisho/Shiva.

Sculpture of a man, Kushana pertod.

The Mathura school evolved in Mathura in Uttar Pradesh with its unique stylisations. The figures were made in red mottled sandstone available from the quarries at Sikri.The Buddhas produces are large in size, standing in abhaya posture, head is shaven with a ushnisa; a small tiered protuberance in the form of a spiral. The drapery is close to the body and the left shoulder is bare. As the school developed the hair got depicted as flat, tight curls on the head. Jaina images are similar. The Kushana  kings are shown wearing long boots, a conical cap and a belted tunic. 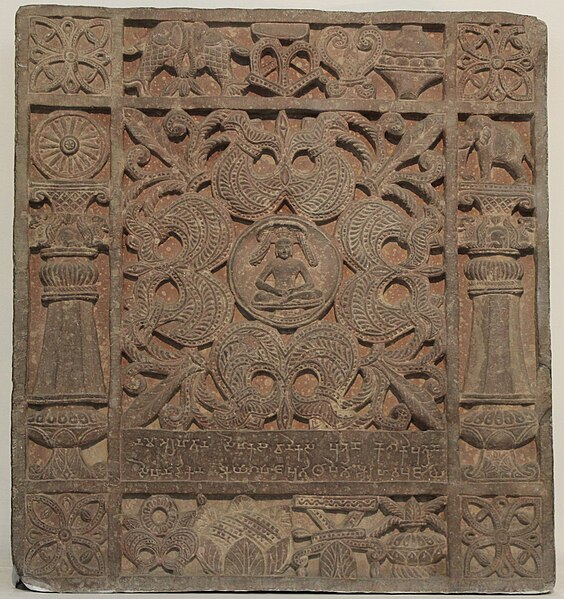 The women figures carved during this period were sensuously beautiful with stylised proportions, depicted on pillars and gateways, yakshi-like in association with trees as symbols of fertility  or in toilet scenes.

The sculpture below depicts Queen Maya with female attendants and guards, one of whom holds a sword,  sleeping on a bed covered with a textile having floral scroll motif. Maya dreams of a six-tusked elephant that descends from heaven to enter her womb through her right side. the broken disc would have had an elephant. This miraculous conception marks the Buddha’s final birth into the world.