The Hyderabad school of Deccani painting had started evolving in early 18th century with the foundation of the Asaf Jahi dynasty. They were the Nizams of Hyderabad; seven rulers have governed the region. Mir Qamaruddin Khan, Nizam-ul-mulk a Viceroy or subedar of the Deccan under the Mughals declared independence in 1724 A. D. He being a patron of the arts along with the rich influence of the Golconda school and Mughal styles; helped in creating many works of art under the Hyderabad-Deccani genre in Aurangabad and Hyderabad.

The school was influenced by other styles but  had its own charcteristics.  They can be seen in its treatment of subjects,costumes, landscape, flora, fauna and the general colouring have Deccani influence. Scenes from gardens and courtyards have been captured other than the main themes which included portraits of the rulers and their families,noblemen, women on terraces, saints and Raga-raginis.

After the death of the first Nizam and subsequent rulers like his son Nasir Jung and Muzaffar Jung, grandson and another son Salabat Jung, Mir Nizam Ali Khan became ruler as Asaf Jah II in 1762. He too was a patron of the arts and during his reign poets, musicians and artists came to his court. His biography Tuzuki-Asafi was written and illustrated by Tajalli Ali Shah in 1793. His court painter was Rai Venkatachalam. Raja Chandulal also patronised the arts and many works were made for Raja Nanak Ram, Rai Rayan and other Hindu noblemen. The political condition during the 18th century was not very stable and this affected the character of the paintings. However lot of portraits were made between the fall of Golconda in 1687 and the beginning of the Asaf Jahi rule in 1724, when the area was under the Mughal governors.

Paintings of the Hyderabad school depict flowers and trees like the palm tree, coconut,plumeria, champa etc. Flowering plants, terraces and parapets made of marble with jaali (trellis) work, doors in brown are seen. Some paintings depict peacocks, ducks and fishes. The sky is blue or blue-green with touches of indigo  to depict clouds. Carpets and rugs are seen in some works. The human figures are tall and have sharp features. Women are shown wearing stringed pearl necklaces. 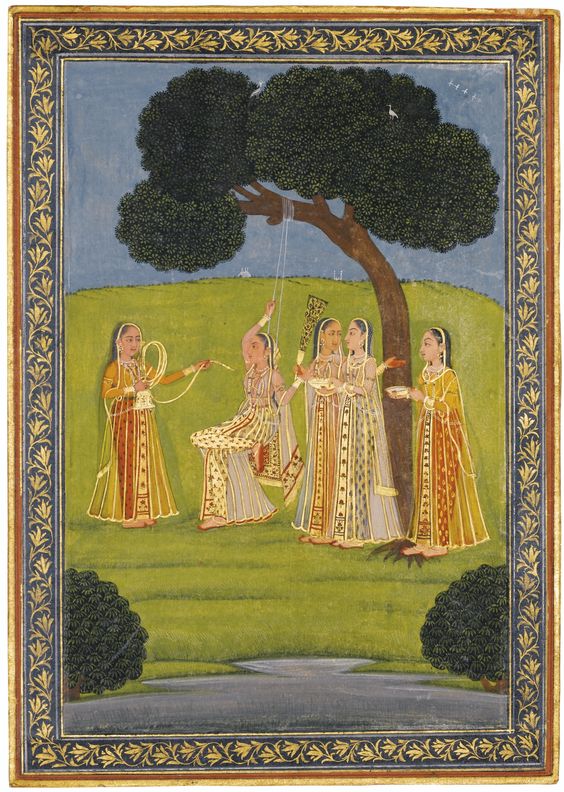 A princess with her friends, Hyderabad school, 18th century.

Sikandar Jah succeeded Nizam Ali Khan as Asaf Jah III(1803-1829) and paintings were still being made. Under Asaf Jah IV and Asaf Jah V paintings depicting gardens and harem scenes were made. By the mid-nineteeth century the demand for these paintings reduced and the paintings went into history but give us a glimpse into the life of that time. 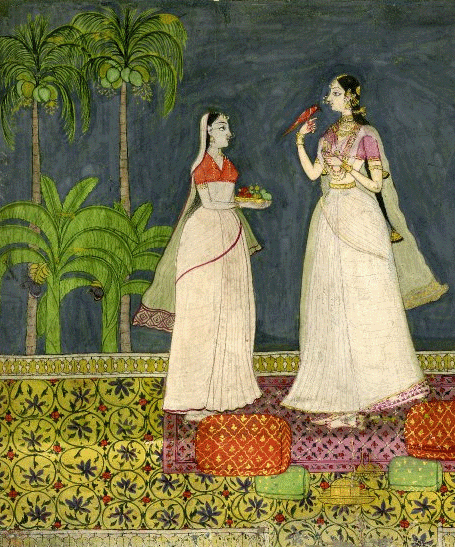 .Women on a terrace,18th century, Hyderabad.