Lord Mahavira is the 24th tirthankara in Jainism. He lived in 6th century B.C and was born in Kundagrama in present day Bihar in India. He  was born to King Siddhartha and his queen Trishala of the Ishkvaku dynasty. In his childhood he was called Vardhamana. He was given the name Mahavira or Great hero because of his heroic deeds in his childhood. He is believed to be consecrated by Indra on Mount Meru. His previous births are mentioned in Mahapurana.

At the age of thirty Mahavira left the comforts of his palace and left to lead the life of an ascetic. His aim was spiritual awakening. He gave up everything he had including his clothes. He went to various places and meditated; underwent rigorous hardships. The places included Nalanda, Mithila,Shravasti and Vaishali.  He attained enlightenment or kevalajnana under a sala tree. Jaina texts Harivamsa-purana and Uttara-purana have described this event. He  became all-knowing and all-seeing. After this he travelled all over India to spread his message. He had thousands of lay followers, sravakas(male) and sravikas(female). His royal followers included King Bimbisara of Magadha and King Kunika of Anga. His teachings are brought together in Agamas, canons. His chief disciple Gautama Swami compiled many of his teachings.  Lord Mahavira preached ahimsa or non-violence, satya or truthfulness, brahmacharya  or chastity, for monks, aparigraha or non-attachment and achaurya  or non-stealing.

Lord Mahavira attained to nirvana from samsara or the cycles of birth and death at 72 in Pawapuri (in Bihar). The funeral rites are done by heavenly beings of tirthankaras and only the hair and nails are left behind, the rest of the body dissolving into air, as said in the Pravachana-sara.

The depiction below shows  Mahavira  on the left decked in jewellery, probably during his consecration.

Depicted below is Mahavira’s nirvana, the crescent shaped siddhashila,a place where all siddhas reside after nirvana is clearly seen. 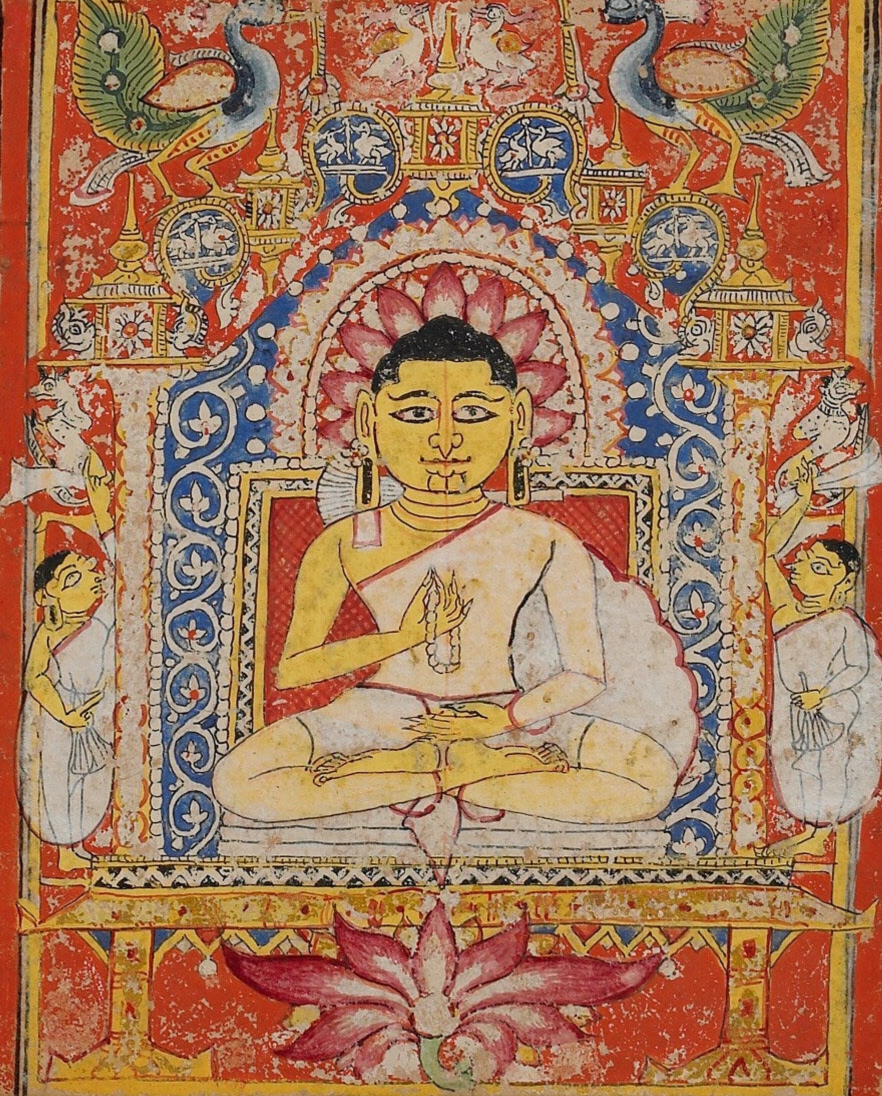