Kamadhenu or Surabhi is the divine, wish fulfilling bovine goddess, mother of all cows in Hindu mythology. She is wish-fulfilling and can grant desires. She is depicted as a white cow containing various deities within her body. As per the Mahabharata she emerged from the churning of the ocean or samudramanthana in order to acquire amrita for the saptarishis, or seven sages. She was ordered by Brahma to give milk for yagnas. Kamadhenu is also said to belong to sage Vashista;provides milk to her sage-masters and warriors if needed. In another part of the epic the Anushasana parva says that Surabhi was born from the belch of Daksha after he drank amrita. Surabhi or Kamadhenu gave birth to many golden cows, the kapila cows who were called the mothers of the world. The Udyoga parva says Brahma drank too much amrita and some of it was split out from which Kamadhenu emerged. The Ramayana calls Surabhi or Kamadhenu as the daughter of sage Kashyapa and his wife Krodhavarsha, the daughter of Daksha. But as per the Puranas, Kamadhenu is the daughter of Daksha and the wife of Kashyapa.The Harivamsa, an appendix of the Mahabharata, calls Kamadhenu, the mother of amrita,,Brahmins, cows and Rudras.  As per the Devi Bhagavata Purana Krishna created Kamadhenu when Radha and Krishna were thirsting for milk. A calf Manoratha was created from its left side; the milk pot from which they were drinking fell and spilled which became the Ksheersagara, the cosmic milk ocean.

Kamadhenu  is believed to reside in Goloka, the world of cows and the netherworld, Patala. Nandini, Shabala are said to be her daughters or other names of Kamadhenu.

Kamadhenu is the sacred cow and a form of the Devi and a source of prosperity. Many Gods are believed to reside in the body of Kamadhenu and she is often depicted as such; the trinity of Brahma, Vishnu and Shiva are on her forehead,her four legs are the Vedas, shoulders the fire God Agnin and wind God, Vayu, eyes are Surya and Chandra, the sun and moon God, her legs are the Himalayas. In another reresentation she has the body of a white cow, a woman’s head with a crown, an eagle’s wings and a peacock’s tail.

She is also shown accompanying Dattatreya and represents the pancha bhuta or five elements. 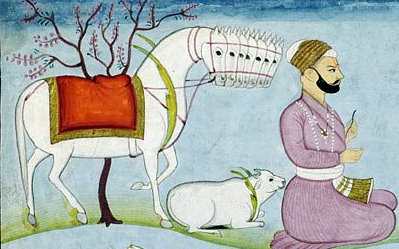 A beautiful depiction of Kamadhenu in art is shown below; a painting of a rishi(sage), the parijata tree and Kamadhenu.The sage sits in an architectural frame, seated on a tiger-skin and with yogabandha. In his right hand he holds a rosary. To his right are his water-pot and staff while to his left is a lotah with bilva leaves. In the centre of the page is the parijata tree, with many different types of leaves and flowers. To the left, is the wish-fulfilling Kamadhenu or Surabhi. It has a female human crowned head, the body of a cow (with anklets),  wings and a peacock’s tail. 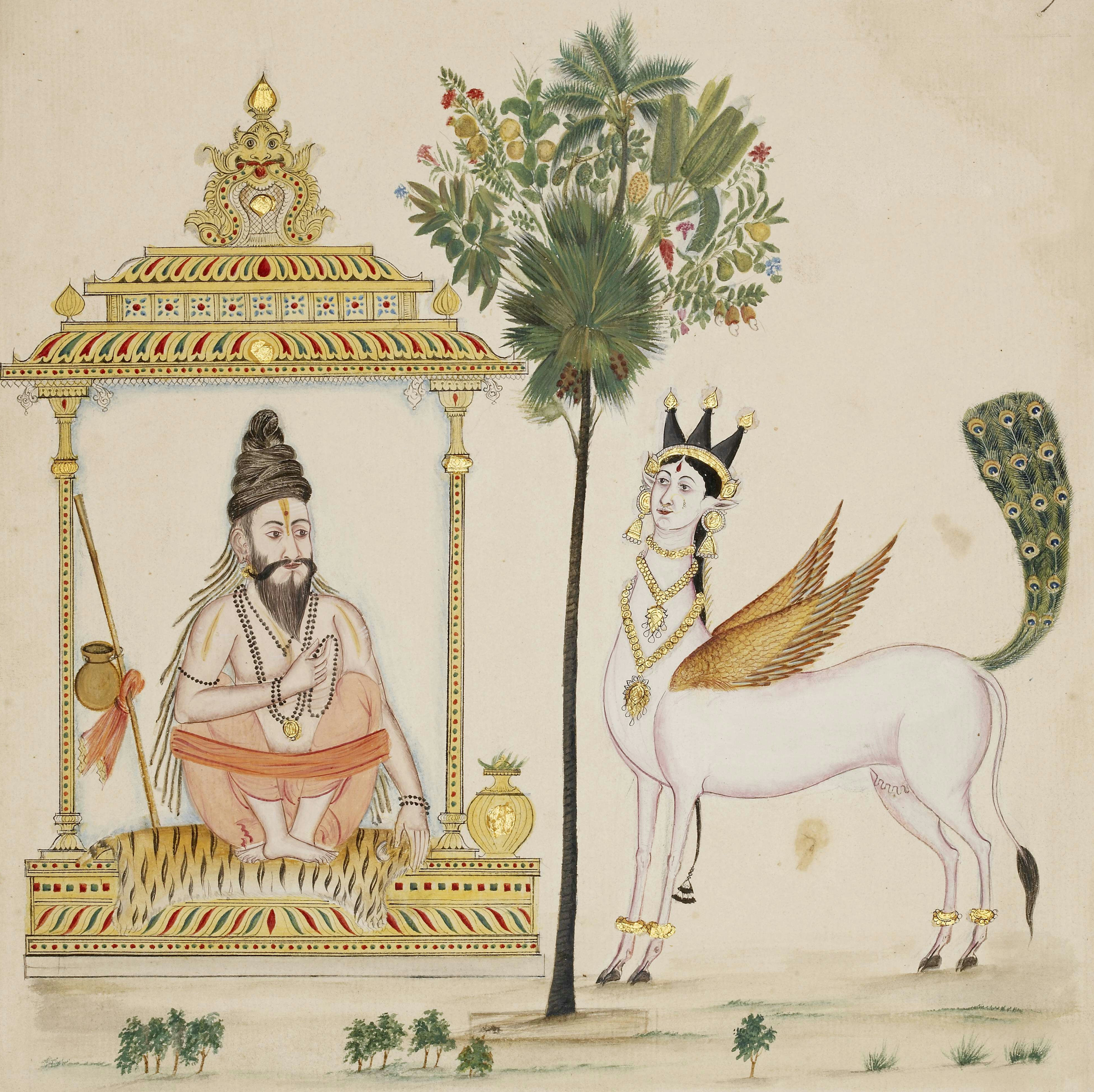