Art is an expression of the human spirit and depicts both sensory and abstract feelings. Art and religion are frequently inter-woven by time, experience and content. Religion finds artistic expression in sculpture,painting and architecture. in India, religion underlies many aspects of human life. Religious worship is an activity to appease powers beyond human control. It is a surrender to existence and a contemplation of the divine, from which arises peace and trust.

Indian art borrows heavily from religion and through visual form many aspects of the Indian deities like Shiva, Vishnu,Brahma,Buddha, Mahavira have been depicted. Art in India exists from prehistoric times to the present day. It can be found manifest on temples, stupas, chaityas, viharas,sculpture,metal icons, paintings,terracottas,wall paintings,pottery,textiles and jewellery.

Representation of deities in art is done in interesting ways. symbols and their language has been used for decoration but can also depict the divine. Symbols are used to represent nature, deities and to communicate ideas. Symbols can be used to convey abstractness and myths.

An excellent symbolic representation can be seen in the famous fort of Gwalior in Madhya Pradesh. The fort at Gwalior has a long history. It stands at 300 feet above the plain lands on Gopachal Hill; it is believed to have been King Suraj Sen of the Kacchhappa dynasty who was cured of leprosy by being directed to a pond by Sage Gwalip after whom the town is named. The King enlarged the water body for common benefit. Gwalior fort is a solid structure, massive, spectacular and very impressive. The fort consists of Badal Mahal, Jehangir Mahal, many gates,water sources including Surajkund, Jauhar taal, Mansarovar,Rani Taal, and Cheri taal. A gurudwara has also been built where the 6th  Sikh guru Hargovind used to meditate.

Man Mandir is however the most awesome  in the entire fort of Gwalior. Emperor Babur visited this palace in 1528. The entrance to the palace is Hathi por, made of four pillars supporting a dome. Two towers flank the entrance mounted by domes. The Man Mandir is the palace of the king which also housed the attendants. 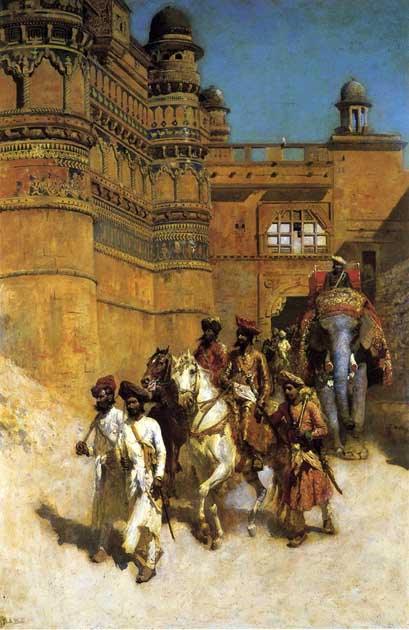 The Maharaja of Gwalior entering his palace,1887.

Inside the palace are courtyards in square shape. To the west of the first is a dance and music hall. On the east is a living room which opens to the inner courtyard. This is large and to its east  and west are the rooms for royalty. From the courtyards staircases go downwards to lower rooms. This palace has beautiful pillars,screen work, ornate ceilings, inlay work,coloured tiles and brackets. The pillars in the first courtyard are placed in four tiers divided into four segments from base to the abacus. The inner courtyard is the larger one and two panels of false screen work exist on the northern and southern side. The false screenwork/panel  in the shape of a chakra is very symbolic and representative from a Hindu point of view of the cosmos. These panels on either sides of the pillars are very interesting and the Hindu trinity of Brahma, Vishnu and Shiva is represented here.

At the centre of the chakra is a lotus which is a symbol of the Brahma, the creator. The lotus also suggests expansion of the soul,rooted in infinite reality and represents concept of primordial birth from the cosmic waters of creation. As per Hindu philosophy the universe or cosmos is always in flux, constantly changing. it is created, maintained and destroyed and created again. The chakra motif which is used can also be understood to refer to the cycles of time.

Vishnu who is also called Padmanabha is believed to rest on the eternal ocean and out of his navel comes out Lord Brahma who takes up creation. It is said that Shiva takes up the duty of destruction at the end of eras or epochs. in this panel Vishnu is seen as a symbol resembling the Srivatsa present in concentric circles in spaces between the lattice surrounding the lotus. Srivatsa is a symbol on the chest of the Vishnu believed to have been created by the blow of Shiva’s trident (trishul) or by the wet hand of sage Bharadwaja. This symbol has been seen in caves, cave inscriptions, stupas,terracottas, seals, pottery and coins. Srivatsa is thus an auspicious mark which also occurs on the chest of Jain Tirthankaras. It has been used as a decorative element from Sunga period.

In this panel the trident is represented in four concentric circles in triangular shapes to represent Shiva.They are found in circles after the Srivatsa shapes as ejecting triangles. This design with cosmic annotations thus captures the paradigm of the universe. Cosmic reality thus portrayed in Hinduism with the Trimurti principle gets depicted and by looking and meditating on this, one can sense a oneness with self and creation!